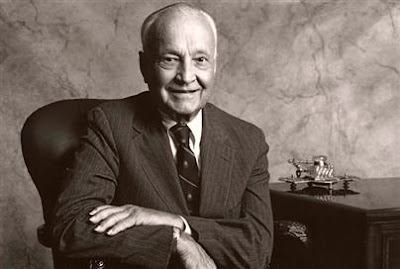 The New York Times
Sir John M. Templeton, a Tennessee-born investor and philanthropist who amassed a fortune in global stocks and gave away hundreds of millions to foster understanding in what he called "spiritual realities," died on Tuesday in Nassau, the Bahamas, where he had lived for decades. He was 95. His death, at Doctors Hospital in Nassau, was caused by pneumonia, a spokesman, Don Lehr, said.

The foundation awards the Templeton Prize, one of the world's richest, and sponsors conferences and studies reflecting the founder's passionate interest in "progress in religion" and "research or discoveries" on the nebulous borders of science and religion.

In a career that spanned seven decades, Sir John dazzled Wall Street, organized some of the most successful mutual funds of his time, led investors into foreign markets, established charities that now give away $70 million a year, wrote books on finance and spirituality and promoted a search for answers to what he called the "Big Questions" — realms of science, faith, God and the purpose of humanity.

Along the way, he became one of the world's richest men, gave up American citizenship, moved to the Bahamas, was knighted by the Queen of England and bestowed much of his fortune on spiritual thinkers and innovators: Mother Teresa, Billy Graham, Aleksandr I. Solzhenitsyn, the physicist Freeman Dyson, the philosopher Charles Taylor and a pantheon of Christians, Jews, Muslims, Buddhists and Hindus.

Inevitably, the Templeton charities engendered controversy. Critics called his "spiritual realities" a contradiction in terms, reflecting a fundamental incompatibility between science and religion. To many, the very idea of "progress" in religion seemed strange, and giving grants for “discoveries” in the field invited accusations that science was being manipulated to promote religion.

But Sir John was unmoved. A Yale graduate, a Rhodes Scholar, an audacious investor, a Presbyterian who preached open-mindedness and eschewed literal interpretations of Scripture, Sir John — who began annual meetings with prayers, he said, to clear the minds of shareholders — made billions as a pioneer in his globally diversified Templeton funds, often taking the old advice, "buy low, sell high," to extremes.

In 1939, when World War II began in Europe, the 26-year-old investor borrowed $10,000 and bought 100 shares each in 104 companies that were selling at $1 a share or less, including 34 in bankruptcy. A few years later, he made large profits on 100 of the companies; four turned out to be worthless.

In 1940, he bought a small investment firm that became Templeton, Dubbrow and Vance, the early foundation of his empire. Sir John embarked on mutual funds in 1954, establishing the Templeton Growth Fund in Canada to cut the taxes of many shareholders — Canada then had no capital gains tax — and to emphasize the global reach of its investment strategy.

As investor interest widened in the 1950s, he started funds specializing in nuclear energy, chemicals, electronics and technology. In 1959, with five funds and $66 million under management, he joined a surge of funds going public. Growth was dramatic. The flagship Templeton Growth Fund reported a 14.5 percent average annual return from 1954 to 1992; a $10,000 investment, with dividends reinvested, would have grown to $2 million.

Sir John sold the Templeton family of funds — scores of them with $13 billion in assets — in 1992, and turned to philanthropies that had engaged him for decades. While he was an elder of the Presbyterian Church (U.S.A.), he took a broad view of spirituality, espousing non-literal views of heaven and hell and a shared divinity between humanity and God.

Contending that almost nothing of God was actually "known" through Scriptures and theology, he founded the Templeton Prize in 1972 to foster "progress in religion" — an idea that included philosophy and exemplary conduct relating to love, gratitude, forgiveness and creativity. He called it an effort to redress the fact that no Nobel Prize was given for religion.

Its first recipient, in 1973, was Mother Teresa of Calcutta, who received $85,000 for her charities. In the 35 years since, the prize, given in London, has grown to $1.6 million. And its criteria has been refined in recent years to encompass "progress toward research or discoveries about spiritual realities."

The Templeton Foundation, based in West Conshohocken, Pa., was established in 1987 to administer the prize and promote "projects to apply scientific methodology to the study of religious subjects," with room for theoretical physics, evolutionary biology, cognitive science and researches into love, human purpose and the nature and origin of religious beliefs. Today, with a $1.5 billion endowment, it largely sustains the controversial modern movement to reconcile science and religion.

Foundation projects have included a multimillion-dollar study of forgiveness, and a two-year study to demonstrate the effect of prayer on 600 patients about to undergo surgery.

Many critics contend that reconciling science and religion is not possible, and that studies to that end are naïve, quixotic or motivated by a desire to put religious beliefs on an equal footing with scientific knowledge.

But others defend the foundation’s approach, insisting that science has no monopoly on truth and that religion and science can cooperate productively.

"We have somehow to break down the barriers between our contemporary culture of science and disciplined academic study" and "the domain of the spirit," the philosopher John Taylor said in accepting the prize in 2007.

John Marks Templeton was born on Nov. 29, 1912, in Winchester, a small Tennessee town 60 miles from Dayton, the scene of the 1925 Scopes "monkey trial" pitting Clarence Darrow and William Jennings Bryan in a battle over the theory of evolution versus fundamentalist views of the Creation. The boy was only 12 then, but issues in the case dominated his later life; he wrote at least eight books on spiritual matters.

He was raised in a devout household and was the first student in town to go to college. Supporting himself at Yale in the Depression, he graduated near the top of his class in 1934, won a Rhodes Scholarship to Balliol College at Oxford University and earned a master's degree in law. He began his Wall Street career in 1937.

That year, he married the former Judith Folk. The couple had three children. His wife died in 1951. In 1958, he married Irene Reynolds Butler, who died in 1993. His daughter, Anne Templeton Zimmerman, died in 2005, and a stepson, Malcolm Butler, died in 1995. He is survived by two sons from his first marriage, John M. Jr., of Bryn Mawr, Pa., a retired surgeon and the chairman and president of the Templeton Foundation, and Christopher, of Colfax, Iowa; a stepdaughter, Wendy Brooks, of Delray Beach, Fla., and three grandchildren and three great-grandchildren.

Among his many gifts was the 1984 endowment of Templeton College, a business and management school at Oxford. In 1987, he was knighted by Queen Elizabeth II for his philanthropies. After many years on Wall Street, he renounced his American citizenship in the 1960s, became a British subject and moved to the Bahamas, a Commonwealth nation that has long been a tax haven.

Sir John said his investment record improved after he distanced himself from Wall Street and no longer worried about the tax consequences of his decisions. He was an early investor in Japan in the 1960's and later in Russia, China and other Asian markets. He sold large holdings before the technology bubble burst in 2000, and warned several years ago that real estate prices were dangerously high.

In Nassau, his net worth swelled into the billions, but his lifestyle remained relatively modest. He drove his own car and spent his days reading, writing and managing his foundation. Visitors were given sandwiches, tea and courtly advice in the afternoon at his white-columned antebellum home on Lyford Cay, set on a hillside lush with citrus trees and bougainvillea, overlooking a golf course and the ocean.

Templeton Prize...good idea; bad idea?
Posted by Mercury at 8:27 AM