Another review of Stephen and Lucy Hawking's children's book 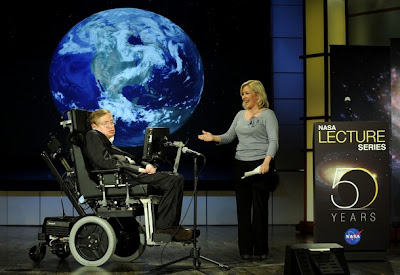 Wired book reviewer Matt Blum gives his review of Stephen and Lucy Hawking's children book George's Secret Key to the Universe. If there is a Christmas this year, it would make a cool gift.

"The Geekly Reader: George's Secret Key to the Universe by Lucy and Stephen Hawking"

Wired
George's Secret Key to the Universe is probably exactly what you'd expect from a children's book written by the world's preeminent theoretical physicist and his daughter. It is full of information about the universe, theories about black holes and tributes to the wonders of science in general, but presented in a gentle way so that it all remains digestible to young minds.

George is a young boy whose parents are extreme technophobes, to the point of refusing to use light bulbs. George doesn't feel the same way, and wants a computer more than anything else in the world. One day his pet pig Freddy runs away, he follows him next door (where George has been forbidden to go), and he discovers that the neighbors are Eric, a physicist, and his daughter Annie, a free spirit. In Eric's study resides Cosmos, the most powerful computer in the world, with a somewhat sullen personality. Eric and Annie, with Cosmos's reluctant help, introduce George to the wonders of science and teach him about the universe. In the process, of course, they teach the reader as well. Alas, George accidentally reveals the existence of Cosmos to his evil school teacher, Dr. Reeper, which sets up much of the plot of the rest of the book. There is also a subplot involving school bullies.

There are some beautiful photographs, mostly from the Hubble Space Telescope, provided in the book, and charts presenting scientific data directly so as not to make the text too technical. Still, I can't unequivocally recommend the book. The first several chapters are clunky, setting up the story in a very obvious way. The messages are delivered in a very heavy-handed way -- for example, the disparity between George's parents and Eric need not have been made quite so drastic. I think many, if not most, kids will realize that the story is there only as a vehicle for the lessons being taught. Still, if my kids (7 and 5) are any indication, they will enjoy the story anyway. There is an unexpectedly scary moment late in the book, which I felt was handled poorly by the authors, but taken as a whole it's a worthwhile read.

George's Secret Key to the Universe is the first book of a planned trilogy, with the second and third books coming out next year and 2010, respectively. It is not a perfect book, and unlike most of the books I have recommended here is not as good a read for adults as for kids, but it's worth the money for its ability to get complicated facts and theories across to kids. And for GeekParents, there's something comforting about knowing that you don't have to double-check the science in a book, because one of the authors is often mentioned in the same breath as Newton and Einstein, which you probably aren't.

"George's Secret Key to the Universe"--Stephen Hawking & daughter Lucy
Posted by Mercury at 6:23 AM