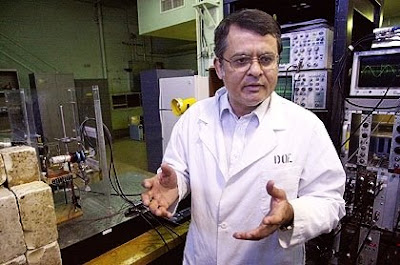 I suppose if you believe you are right, then fight. Stay tuned to As The Bubble-Fusion Turns.

physicsworld.com
Lawyers for the "bubble-fusion" researcher Rusi Taleyarkhan have told physicsworld.com that he will appeal over the findings of a panel that last week found him guilty of two charges of scientific misconduct. Taleyarkhan, a nuclear engineer at Purdue University in the US, was charged by a six-member internal committee, which concluded that he had cited a paper by researchers in his own lab as if it were an independent confirmation of his alleged discovery of bubble fusion in 2002.The committee also found him guilty of adding the name of a student who had not contributed to that paper as an author.

The current controversy began in 2002 when Taleyarkhan, who was then working at the Oak Ridge National Laboratory in Tennessee, co-authored a paper in Science in which he reported firing a barrage of ultrasound waves into a liquid mixture of benzene and acetone (Science 295 1868). He claimed that bubbles of gas, which emit flashes of light when the sound waves force them to expand and collapse, could reach such high temperatures and pressures that during this process fusion reactions are initiated.

Several groups, however, failed to replicate the research, while two other Purdue engineers — Lefteri Tsoukalas and Tatjana Jevremovic — complained that Taleyarkhan had tried to prevent them publishing their negative results. An internal investigation last year cleared Taleyarkhan of that charge, but when critics argued that the panel had not taken their views into account, Purdue began a second investigation. Although the committee completed its work in April, Purdue did not issue the report until the Office of Naval Research, which funded Taleyarkhan’s research, had accepted it.
'Research misconduct'

The panel examined two papers, stimulated by Taleyarkhan, that reported successful replication of his original results — one from 2005 in Nuclear Engineering and Design (235 1317) and the other in a Festschrift to Taleyarkhan’s PhD supervisor Richard Lahey. Taleyarkhan’s postdoc Yiban Xu and graduate student Adam Butt were named as coauthors of the papers, even though Butt had allegedly only checked Xu’s data. "[T]he weight of the evidence shows that Dr Taleyarkhan compelled the addition of Mr Butt’s name as an author…knowing that Mr Butt had not substantively contributed…in order to create an appearance of collaboration between Dr Xu and Mr Butt," the committee concluded. "This is research misconduct."

The panel then looked at a paper from 2006 in Physical Review Letters (Phys. Rev. Lett. 96 034301), in which Taleyarkhan cited the NED paper by Xu and Butt to support his assertion that his results had been independently confirmed. However, that claim, the committee concluded, is "simply not supported by the weight of the evidence of his extensive involvement in the…research and publication. The assertion of independent confirmation…is falsification of the research record and thus is research misconduct."

Purdue gave Taleyarkhan 30 days to appeal the committee's verdict. According to his lawyer, he plans to do so. "There are a number of facts and issues that were not allowed in the inquiry, and the other nuclear engineers involved are all in complete support for Taleyarkhan," John Lewis of the Indianapolis law firm Lewis and Wilkins told physicsworld.com. "Xu maintains to this day that Butt's involvement was his choice. But that part of Xu's testimony was completely ignored."

Kenneth Suslick, a chemist at the University of Illinois and long-time critic of bubble fusion, says the report is some kind of vindication. However, he complains that "committee members were not given the charge of investigating the veracity of Taleyarkhan’s research". But Colin West, a former colleague of Taleyarkhan's at Oak Ridge, regards the investigation as a "witch hunt". He told the Lafayette Journal and Courier that the committee’s findings "have no relevance at all to whether his research is correct and his results are valid".