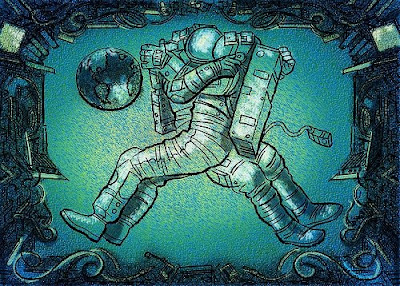 "For Better or Worse, Sex in Space Is Inevitable"

space.com
Weddings in space could be right around the corner, and experts figure the inevitable cosmic consummation will be just around the next corner.

For all we know, sex in space has already taken place. But NASA officials aren't talking about that much.

Beyond space tourism as a platform for steamy shenanigans, space missions are the perfect petri dishes for close encounters, and this year NASA certainly has a busy flight schedule, with five missions planned. And more countries than ever are now venturing into space, with Japanese astronaut Koichi Wakata slated to become Japan's first long-duration space flyer this year and China gearing up for its first spacewalk scheduled for October.

Things will get even more interesting with future long-duration missions envisioned for the moon, Mars and beyond.

"To say that astronauts are some superior beings who cannot have interests in any kind of sexual feelings for three years ... I just don't buy it," said Jason Kring of Embry-Riddle Aeronautical University in Florida. Kring also pointed out the possibly negative consequences of pregnancies in a microgravity environment.

"Are we going to sterilize our crew members before sending them to Mars?" said Kring, who studies the psychological effects of long-duration space missions.

Meanwhile, nobody claims to know whether "it" has happened already in space.

"We don't study sexuality in space, and we don't have any studies ongoing with that," said NASA spokesman Bill Jeffs of the Johnson Space Center in Houston. "If that's your specific topic, there's nothing to discuss," he added, referring to "sex in space."

In any case, science journalist Laura Woodmansee, who penned "Sex in Space" (CG Publishing Inc., 2006), predicts "honeymoons in space and out-of-this-world sex will be a reality within a decade."

Here on Earth, the closest analog to long-term isolation of groups in space is the South Pole, where about 200 researchers live year-round.

Last month, before six months of winter darkness descended over Antarctica's McMurdo Station, the research base received a delivery of about 16,500 condoms.

"There's an unspoken behavior there [at the polar base] where you take a spouse for the time you're there — you have an exclusive relationship with someone," Kring told SPACE.com. "It's understood that when you leave, that relationship is over."

He added, "I don't know how it's going to work on a three-year mission to Mars."

"Certainly at polar research stations, there's sexual relations, sexual contact, between men and women," Palinkas said. "On a three-year mission to Mars, that's a possibility as well, although NASA in the past has tried to downplay the need for and the implications of sexual needs on a mission that long."

Up until the 1980s, NASA crews were all male. In 1983, Sally Ride became the first American woman in space aboard the shuttle Challenger. Missions now routinely include one or two women.

"[For] a true long-duration mission if we go to Mars or back to the moon, politically, I don't think you're going to see an all male or all 'American' crew," Kring said.

Politics aside, "research would suggest that a mixed crew of men and women would probably be best," Kring said. "And this goes back to the Antarctic research where it used to be the expeditions were all men."

Nonetheless, co-ed crews, like the all-male ones, will have hefty workloads and little play time.

"They're mission-oriented. They're very focused on the task at hand," said NASA spokesperson Nicole Cloutier-Lemasters of the Johnson Space Center.

Sexual frustration could ensue, however. "Human sexuality is a basic need and now you're trying to tell people, 'Hey for three years, you can't do that.' They're going to figure out a way to do it," Kring said.

If they do, they're on their own for now. Palinkas said there "is no official policy" at NASA regarding sex on space missions. "There really has been no research conducted on the area to know whether it [sex in space] would be a good thing or a bad thing," he said, "but it probably is inevitable."

Sex is about more than psychology and rules and mission plans, of course. And when you get down to it, the key to successful sex in space is about managing a microgravity environment.

In "Sex in Space," Woodmansee describes several positions that might work, ranging from the modified missionary position to seated with "interlocking Y legs."

Props also could come into play, including a shared elastic waistband or tethers to hold one partner to a stable structure, she writes.


Do Astronauts Have Sex?


"Sexxxxxxxxxx innnnnnnnnn spaceeeeeeeeee". Well, it was bound to surface--"romance/sex" in space. The relationships initiated in space or on other planets are just as complicated there as they are here and there are no rules. It is basically a manifestation of a desire to be wanted and a sharing of experiences. Maybe it is something innate to pair and propagate the species. But just remember the complications: The dating part, the sex part, the rivalry, the rejection. What if the situation happened with aliens? The whole mission could suffer. This may just be another good reason to curb space travel for a while. 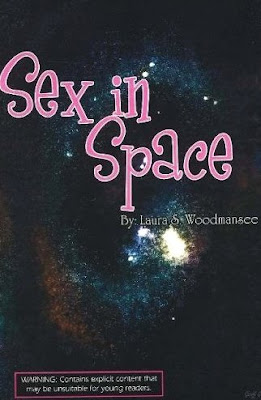 As hoteliers design zero-gravity hotel suites for out-of-this-world unions and with the first honeymoon in space already scheduled, this provocative account reveals the truth about romantic rendezvous in Earth's orbit and beyond as well as the advantages and difficulties of having sex in space. Questions the space agencies are too embarrassed to discuss—such as Has anyone "done it" in space? What will happen to the first baby conceived in space? and Have astronauts and cosmonauts practiced "docking maneuvers" while in orbit?—are thoughtfully answered, while science-fiction myths about interstellar intercourse are dispelled. From chemistry to psychology, this exploration runs the reproductive and sexual gamut, from lust and sexual mechanics to conception, pregnancy, and birth in low-gravity situations.