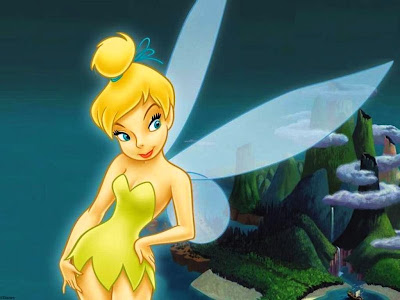 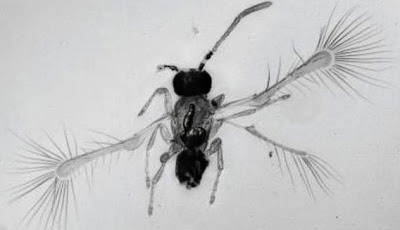 "The real Tinker Bell: Scientists discover new species of minute fairyfly that is just one quarter of a millimetre long"

It may not be as common as the Peter Pan fairy, but this newly discovered insect is the real Tinker Bell.

The fairyfly species named Tinkerbella nana was discovered in the forests of Costa Rica.

The miniscule specimens were all just 250 micrometres long - or one quarter of a millimetre - and collected by sweeping the forest floor.

Tinkerbella nana was collected at the La Selva Biological Station and named as the newest fairyfly species.

Each is fringed with long hair-like bristles.

Mymaridae, commonly known as fairyflies, are one of about 18 families of chalcid wasps.

They are found across the world, except in Antarctica, but are so minute that they are seldomly noticed by humans.

Their apparent invisibility and delicate wings with long fringes resembling the mythical fairies have earned them their common name.

Fairyfly species include the world's smallest known winged insect, Kikiki huna, which has a body length of only 155 micrometres.

The smallest known adult insect is also a fairyfly. The wingless male of Dicopomorpha echmepterygis is only 130 micrometres.

Fairyflies live off the eggs and larvae of other insects.

The eggs are commonly laid in concealed locations, such as in plant tissues or in leaf litter or soil.

John Huber, from Natural Resources Canada, was the lead author of A New Genus And Species of Fairyfly, Tinkerbella Nana published in the Journal of Hymenoptera Research.

He said: 'If something is physically possible in living things, some individuals of at least one species, extinct or extant, will likely have achieved it.

'So the lower size limit, by whatever measure of size is chosen, was almost certainly already evolved—somewhere, sometime.

'If we have not already found them, we must surely be close to discovering the smallest insects and other arthropods.'

The Tinkerbella species were collected at the biological station owned and managed by the Organization for Tropical Studies.

Little is known about the lifecycle of fairyflies.

They have smaller wing surfaces and relatively long setae - or bristles - are believed to have an aerodynamic function.

It may be to reduce turbulence on wings flapping at several hundred beats per second.


And two related items on Peter Pan and Tinker Bell...

The cocoon existence of Peter Pan

Tinkerbell, Wendy, Sappho
Posted by Mercury at 9:13 AM