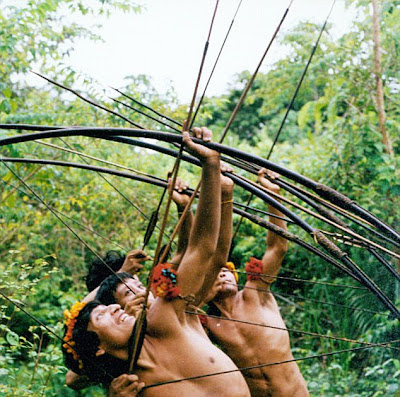 Campaigners say the Brazilian government is failing to protect one of the world's most endangered tribes.

The Awa people are believed to number just 450, but their territory has attracted thousands of loggers and settlers.

Last year a judge ordered all outsiders should leave the area within 12 months.

But the deadline has passed and no evictions have taken place, says indigenous rights group Survival International.

If their forest is being destroyed they will end up living on handouts from the government and lose their way of life.

The Awa live in north eastern Brazil and survive as hunter-gatherers in remote areas of rainforest. Of their number around 100 have never had contact with outsiders.

However, the tribe's four protected territories have been whittled away over the years by settlers and loggers who are now said to outnumber the Awa by ten to one.

One territory of 120,000 hectares has had over 30% of the forest cover removed. Logging trucks are reported to enter and leave the area day and night.

"The Awa talk about hearing chainsaws and their game being scared away," Alice Bayer, from Survival International, told BBC News.

"They find when they go to hunt there are less animals there because of all the noise."

The Awa have tried to fight back, using the courts to enforce their rights to their territories that are guaranteed by the Brazilian constitution. A judge, Jirair Aram Meguerian ordered that all the loggers, ranchers and other settlers who have come into the area should leave by the end of March this year.

But the authorities haven't done anything to evict invaders. Campaigners say that responsibility for the issue has fallen between different government departments. And because the rainy season is now finishing, more loggers are expected into the area.

"We're very worried, more and more, that the Awa are going to find less food in the forest and become dependant on government handouts in the end," said Alice Bayer.

"If their forest is being destroyed they will end up living on handouts and lose their way of life."

At the end of the 1960s geologists discovered some of the world's richest reserves of iron ore in the region where the Awa lived. In the 1980s a railway line was built to transport the ore from the Carajas mine. The development brought outsiders who exposed the Awa to disease and violence. Their population was decimated.

Despite the lack of progress in meeting the judicial deadline, there is hope that if pressure can be brought to bear on the authorities to act, the future for the Awa can be secured.

"If the settlers are evicted and the areas are protected, they should be fine," said Alice Bayer.

"We have lots of other examples of indigenous people in Brazil who do have protected areas and their numbers are recovering and they are doing very well. It doesn't really take that much."

Brazil's National Indian Foundation (FUNAI) estimates there are around 77 isolated indigenous tribes in the Amazon region - only 30 of these have been located as yet.

Promo for a TV documentary...