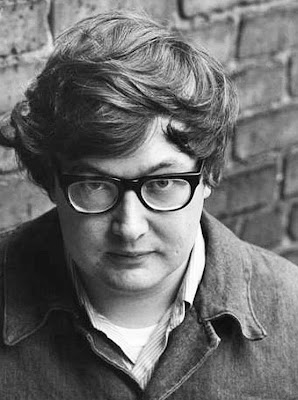 I've read the obits for Roger Ebert and they are loaded with the usual homage and factual mater, but this one from Slate by Dana Stevens is more insightful. Saturday nights on the local PBS affiliate provided good banter between Ebert and Siskel. Several times I was angered that he panned a favorite film. Nevertheless, the duo provided a light-hearted venue to the global cinema presentations.

Mentor, prolific sharer of links, cooking philosopher, and lover of the movies.

I often cry when I read obituaries—sometimes even those for people I’ve never heard of—but it’s rare that I cry my way through writing one. It looks like that’s going be the case, though, in eulogizing Roger Ebert, who was way more to me—to many people, I know—than the movie critic for the Chicago Sun-Times.

He was that, of course, inimitably, over the course of a 46-year career at the paper. In the late '70s, Ebert rose to national fame as the co-host, with Gene Siskel, of the companionably kvetchy PBS film-review show Sneak Previews, which would later be syndicated as Siskel and Ebert and the Movies and would run under that title until Siskel’s death from cancer in 1999. A few years later, when the Internet had begun its work of reducing journalism as Ebert’s generation had known it to smithereens, he reinvented himself as a prolific blogger, tireless tweeter, and link-finder extraordinaire. Simultaneously, Ebert became a passionate advocate for overlooked movies and a fosterer of young critics’ careers, with projects like the yearly Ebertfest in Champaign, Illinois or his global network of Far-Flung Correspondents, young critics from around the world—Turkey, Brazil, the Philippines—who contribute regularly to his site, rogerebert.com.

In the course of his 70-year-long life—he was born the year after Pearl Harbor and died the year after “Gangnam Style”—Ebert witnessed massive shifts in American history and global politics and journalism and technology, not to mention cinema and popular culture. But he remained relentlessly modern, always alive to the particularity of the current moment he was living and curious about the one that would come next. It was that quality—paired with a seemingly bottomless reserve of intellectual and physical energy—that made him so keenly observant as a critic and such a master of the epigrammatic, fast flowing Twitter form. Even when he was debating gamers offended by his statement that video games could never be art, the charge that Ebert was somehow a calcified 20th-century fuddy-duddy was too ridiculous to stick. How many sexagenarian movie critics are out there pondering the question of the aesthetics of new media, marshaling everything from cave paintings to Aristotle to the films of Georges Méliès as evidence for their argument? Later, as he often did when his ideas caused pushback, Ebert reconsidered, apologizing to gamers (if not retracting his opinion) in a post hilariously titled "Okay, Kids, Play on My Lawn."

It was in the last seven years of his life, after he lost most of his lower jaw to cancer and, with it, the ability to eat, drink, or speak—a loss he describes unforgettably in his glorious 2010 blog post  "Nil by mouth"—that Ebert truly seemed to expand as a writer and thinker, his sphere of influence and the reach of his generosity steadily increasing even as his once-hefty body grew smaller and frailer. It wasn’t just that he inspired people by soldiering on through illness and disability (though that was certainly the case). It was that Ebert somehow seemed more powerful and prolific in this late incarnation than he had before, his already formidable life force ever more focused on the urgent, everyday task of writing and joking and arguing about the things that really matter in life. Movies, yes, still and always movies, but also politics and music and friendship and love and addiction  and even, incredibly, food—more than four years after the last bite of solid food had passed his lips, Ebert published a cookbook about dishes that could be made in a rice cooker, the kind of dishes he still enjoyed preparing for his wife of 20 years, Chaz, and their friends. (In an expansive blog post outlining his one-pot cooking philosophy, he dedicates his simple-to-make recipes to “You, solitary writer, artist, musician, potter, plumber, builder, hermit. You, parents with kids […] You, in the witness protection program. You, nutritional wingnut. You, in a wheelchair.”)

Cooking tips from a man who can no longer eat—that’s Roger Ebert all over. I’ve written before on Slate about how Ebert’s generosity touched my life personally: as a movie-obsessed middle-schooler, I wrote him a fan letter whose verbosity and pretentiousness I shudder to imagine, asking what I should do to become a film critic like him (memo to my younger self: that “like him” part? Never gonna happen). His answer—typed, in those pre-@-reply days, on small-format Sun-Times letterhead, using a typewriter with a stuck “T” key—was wonderfully thoughtful, serious and encouraging, and remains to this day one of my most treasured personal documents.

There’s no way of calculating how big a role getting that letter played in my eventually, by some stroke of luck I still don’t understand, becoming a professional movie critic more than 20 years later. But I know I am one of many people whose life was changed, not just abstractly but concretely, by Roger Ebert’s passion for movies and his conviction that talking and writing about them with other people (even pretentious 12-year-olds in suburban San Antonio) truly mattered. I told him something along those lines when I wrote him for the second time, a few years ago, relating my story about that long-ago middle-school letter as I nervously invited him to join the 2009 Slate Movie Club, certain he would refuse. He didn’t acknowledge my sappy story at all in his one-word response: “Sure!” I suspect he heard many such testimonials from people whose lives he’d touched.

That was the thing about Roger (whom I never met in person; I was planning to go to Ebertfest one of these years, always assuming there would be years). He was the guy who said “Sure!” In a wonderful mutual interview Ebert and Siskel did for the Chicago Tribune in 1998, Ebert responds to Siskel’s criticism that he tends to go too easy on “cheap exploitative schlock” like The Players Club with this telling reply: “I also have the greatest respect for you, Gene, but if you have a flaw, it is that you are parsimonious with your enjoyment, parceling it out as if you are afraid you will prematurely expend your lifetime share.” Joy—in movies, in conversation, in language, in life—was not something that Roger Ebert meted out parsimoniously. He had more than enough to last a lifetime, and now that he’s gone, he’s left so much behind.

The death of Roger Ebert is an incalculable loss for movie culture and for film criticism. And it’s a loss for me personally. Roger was always supportive, he was always right there for me when I needed it most, when it really counted – at the very beginning, when every word of encouragement was precious; and then again, when I was at the lowest ebb of my career, there he was, just as encouraging, just as warmly supportive. There was a professional distance between us, but then I could talk to him much more freely than I could to other critics. Really, Roger was my friend. It’s that simple.

Few people I’ve known in my life loved or cared as much about movies. I know that’s what kept him going in those last years – his life-or-death passion for movies, and his wonderful wife, Chaz.

We all knew that this moment was coming, but that doesn’t make the loss any less wrenching. I’ll miss him — my dear friend, Roger Ebert.

Roger loved movies. They were his life. His reviews went far deeper than simply thumbs up or thumbs down. He wrote with passion through a real knowledge of film and film history, and in doing so, helped many movies find their audiences. Along with Gene Shalit, Joel Siegel, and of course Gene Siskel, Roger put television criticism on the map. Roger’s passing is virtually the end of an era and now the balcony is closed forever.

Roger Ebert [Wikipedia]
Posted by Mercury at 5:46 AM