“the dark side of open access,”...free access to scholarly publications 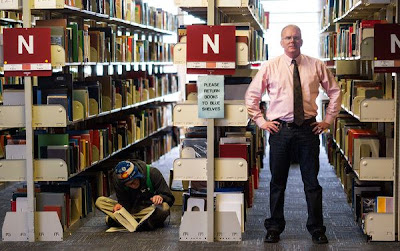 The scientists who were recruited to appear at a conference called Entomology-2013 thought they had been selected to make a presentation to the leading professional association of scientists who study insects.

But they found out the hard way that they were wrong. The prestigious, academically sanctioned conference they had in mind has a slightly different name: Entomology 2013 (without the hyphen). The one they had signed up for featured speakers who were recruited by e-mail, not vetted by leading academics. Those who agreed to appear were later charged a hefty fee for the privilege, and pretty much anyone who paid got a spot on the podium that could be used to pad a résumé.

“I think we were duped,” one of the scientists wrote in an e-mail to the Entomological Society.

Those scientists had stumbled into a parallel world of pseudo-academia, complete with prestigiously titled conferences and journals that sponsor them. Many of the journals and meetings have names that are nearly identical to those of established, well-known publications and events.

Steven Goodman, a dean and professor of medicine at Stanford and the editor of the journal Clinical Trials, which has its own imitators, called this phenomenon “the dark side of open access,” the movement to make scholarly publications freely available.

The number of these journals and conferences has exploded in recent years as scientific publishing has shifted from a traditional business model for professional societies and organizations built almost entirely on subscription revenues to open access, which relies on authors or their backers to pay for the publication of papers online, where anyone can read them.

Open access got its start about a decade ago and quickly won widespread acclaim with the advent of well-regarded, peer-reviewed journals like those published by the Public Library of Science, known as PLoS. Such articles were listed in databases like PubMed, which is maintained by the National Library of Medicine, and selected for their quality.

But some researchers are now raising the alarm about what they see as the proliferation of online journals that will print seemingly anything for a fee. They warn that nonexperts doing online research will have trouble distinguishing credible research from junk. “Most people don’t know the journal universe,” Dr. Goodman said. “They will not know from a journal’s title if it is for real or not.”

Researchers also say that universities are facing new challenges in assessing the résumés of academics. Are the publications they list in highly competitive journals or ones masquerading as such? And some academics themselves say they have found it difficult to disentangle themselves from these journals once they mistakenly agree to serve on their editorial boards.

The phenomenon has caught the attention of Nature, one of the most competitive and well-regarded scientific journals. In a news report published recently, the journal noted “the rise of questionable operators” and explored whether it was better to blacklist them or to create a “white list” of those open-access journals that meet certain standards. Nature included a checklist on “how to perform due diligence before submitting to a journal or a publisher.”

Jeffrey Beall, a research librarian at the University of Colorado in Denver, has developed his own blacklist of what he calls “predatory open-access journals.” There were 20 publishers on his list in 2010, and now there are more than 300. He estimates that there are as many as 4,000 predatory journals today, at least 25 percent of the total number of open-access journals.

“It’s almost like the word is out,” he said. “This is easy money, very little work, a low barrier start-up.”

Journals on what has become known as “Beall’s list” generally do not post the fees they charge on their Web sites and may not even inform authors of them until after an article is submitted. They barrage academics with e-mail invitations to submit articles and to be on editorial boards.

One publisher on Beall’s list, Avens Publishing Group, even sweetened the pot for those who agreed to be on the editorial board of The Journal of Clinical Trails & Patenting, offering 20 percent of its revenues to each editor.

One of the most prolific publishers on Beall’s list, Srinubabu Gedela, the director of the Omics Group, has about 250 journals and charges authors as much as $2,700 per paper. Dr. Gedela, who lists a Ph.D. from Andhra University in India, says on his Web site that he “learnt to devise wonders in biotechnology.”
Another Beall’s list publisher, Dove Press, says on its Web site, “There are no limits on the number or size of the papers we can publish.”

Open-access publishers say that the papers they publish are reviewed and that their businesses are legitimate and ethical.

“There is no compromise on quality review policy,” Dr. Gedela wrote in an e-mail. “Our team’s hard work and dedicated services to the scientific community will answer all the baseless and defamatory comments that have been made about Omics.”

But some academics say many of these journals’ methods are little different from spam e-mails offering business deals that are too good to be true.

Paulino Martínez, a doctor in Ceyala, Mexico, said he was gullible enough to send two articles in response to an e-mail invitation he received last year from The Journal of Clinical Case Reports. They were accepted. Then came a bill saying he owed $2,900. He was shocked, having had no idea there was a fee for publishing. He asked to withdraw the papers, but they were published anyway.

“I am a doctor in a hospital in the province of Mexico, and I don’t have the amount they requested,” Dr. Martínez said. The journal offered to reduce his bill to $2,600. Finally, after a year and many e-mails and a phone call, the journal forgave the money it claimed he owed.

Some professors listed on the Web sites of journals on Beall’s list, and the associated conferences, say they made a big mistake getting involved with the journals and cannot seem to escape them.

Thomas Price, an associate professor of reproductive endocrinology and fertility at the Duke University School of Medicine, agreed to be on the editorial board of The Journal of Gynecology & Obstetrics because he saw the name of a well-respected academic expert on its Web site and wanted to support open-access journals. He was surprised, though, when the journal repeatedly asked him to recruit authors and submit his own papers. Mainstream journals do not do this because researchers ordinarily want to publish their papers in the best journal that will accept them. Dr. Price, appalled by the request, refused and asked repeatedly over three years to be removed from the journal’s editorial board. But his name was still there.

About two years ago, James White, a plant pathologist at Rutgers, accepted an invitation to serve on the editorial board of a new journal, Plant Pathology & Microbiology, not realizing the nature of the journal. Meanwhile, his name, photograph and résumé were on the journal’s Web site. Then he learned that he was listed as an organizer and speaker on a Web site advertising Entomology-2013.

“I am not even an entomologist,” he said.

He thinks the publisher of the plant journal, which also sponsored the entomology conference, — just pasted his name, photograph and résumé onto the conference Web site. At this point, he said, outraged that the conference and journal were “using a person’s credentials to rip off other unaware scientists,” Dr. White asked that his name be removed from the journal and the conference.

Weeks went by and nothing happened, he said. Last Monday, in response to this reporter’s e-mail to the conference organizers, Jessica Lincy, who said only that she was a conference member, wrote to explain that the conference had “technical problems” removing Dr. White’s name. On Tuesday, his name was gone. But it remained on the Web site of the journal.

Dr. Gedela, the publisher of the journals and sponsor of the conference, said in an e-mail on Thursday that Dr. Price and Dr. White’s names remained on the Web sites “because of communication gap between the EB member and the editorial assistant,” referring to editorial board members. That day, their names were gone from the journals’ Web sites.

“I really should have known better,” Dr. White said of his editorial board membership, adding that he did not fully realize how the publishing world had changed. “It seems like the Wild West now.”
Posted by Mercury at 1:01 PM