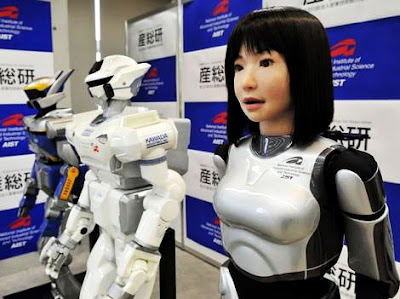 From the T-101 to Data from Star Trek, humans have been presented with the fictional dilemma of how we empathize with robots. Robots now infiltrate our lives, toys like Furbies or robot vacuum cleaners bring us closer, but how do we really feel about these non-sentient objects on a human level? A recent study by researchers at the University of Duisburg Essen in Germany found that humans have similar brain function when shown images of affection and violence being inflicted on robots and humans.

In the first study, 40 participants watched videos of a small dinosaur-shaped robot that was treated in an affectionate or a violent way and measured their level of physiological arousal and asked for their emotional state directly after the videos. Participants reported to feel more negative watching the robot being abused and showed higher arousal during the negative video.

The 14 participants were presented videos showing a human, a robot and an inanimate object, again being treated in either an affectionate or in a violent way.

Affectionate interaction towards both, the robot and the human, resulted in similar neural activation patterns in classic limbic structures, indicating that they elicit similar emotional reactions. However, when comparing only the videos showing abusive behavior differences in neural activity suggested that participants show more negative empathetic concern for the human in the abuse condition.

A great deal of research in the field of human-robot interaction concentrates on the implementation of emotion models in robotic systems. These studies test implementations with regard to their believability and naturalness, their positive influence on participants, or enjoyment of the interaction.

But there is little known on how people perceive "robotic" emotion and whether they react emotionally towards robots. People often have problems verbalizing their emotional state or find it strange to report on their emotions in human-robot interactions. Rosenthal-von der Putten and Kramer's study utilized more objective measures linked to emotion like physiological arousal and brain activity associated with emotional processing.

"One goal of current robotics research is to develop robotic companions that establish a long-term relationship with a human user, because robot companions can be useful and beneficial tools. They could assist elderly people in daily tasks and enable them to live longer autonomously in their homes, help disabled people in their environments, or keep patients engaged during the rehabilitation process," said Rosenthal-von der Putten.

"A common problem is that a new technology is exciting at the beginning, but this effect wears off especially when it comes to tasks like boring and repetitive exercise in rehabilitation. The development and implementation of uniquely humanlike abilities in robots like theory of mind, emotion and empathy is considered to have the potential to solve this dilemma."

Would you feel badly if her arm fell off?

Ethics: Robots, androids, and cyborgs
Posted by Mercury at 8:59 AM