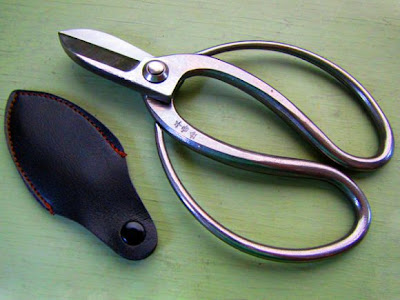 "The scissor-maker that has cut through Chinese history"

All businesses face their ups and downs along the way to success.

But the Hangzhou Zhang Xiaoquan Company can claim a history longer and more tumultuous than most.

Imperial dynasties have come and gone, wars and revolutions have passed, and the economy has morphed from capitalist to communist and back again.

But through it all, Zhang Xiaoquan's workshops and factories have been quietly making one humble, household utensil - scissors.

In the dying years of the Ming Dynasty, a craftsman by the name of Zhang Jiasi found a way to make scissors that were both beautiful and durable.

He continued to use iron for the body of the scissors, allowing the handles to be easily moulded and shaped.

But the new trick, adapting an ancient sword-making technique, was to mix molten steel into the cutting edges of the blades - using a high temperature and a lot of careful hammering - to give the scissors a much harder, sharper bite.

A few decades later Zhang Jiasi's son, Zhang Xiaoquan, inherited the business and moved it to the eastern Chinese city of Hangzhou, and in 1663, his namesake company was born.

Ding Chenghong, Zhang Xiaoquan's current general manager, tells me that the business is still trying to maintain the connection to its history.

"Our founder had a motto," he says. "Good steel and excellent workmanship."

There are even a few craftsmen who can still fashion a pair of scissors the old way, bashing the molten steel and iron together entirely by hand, and a few of those techniques have been retained in some of the modern-day factory-made products.

But as I'm given a tour of one of the modern factories, I wonder if something is slightly amiss.

With the giant metal presses hissing and clanking inside the hangar-like building, and overall-wearing workers resembling something out of a communist propaganda poster, there is little sign of any of that heritage.

This is the mass production that China is famed for, with the company today employing a total of 1,500 people and making around seven million pairs of scissors and three million knives a year.

The average pair of household snips being churned off the production line sells for around $3 to $5 (£2 to £3.25) a pair.

Anywhere else in the world, you might think, a brand with the pedigree of Zhang Xiaoquan would have positioned itself as something a little more high-end, and maybe even built an upmarket international reputation.

But exports account for less than half of one per cent of the company's total sales revenue of around $40m a year.

The answer lies perhaps, once again, in a corporate history that has mapped the changing fortunes of China itself.

I find Zhang Qian, an administrative manager, in a small office on the second floor of the factory.

She has little to complain about it seems, with a good job and a small apartment provided by the company.

And yet Ms Zhang - note the name - could have had so much more.

She is the direct descendant, the 13th generation ancestor, of none other than the esteemed founder Zhang Xiaoquan.

In 1958 her grandfather, the 11th generation, and the then capitalist boss of a thriving scissor-making business, found himself very much on the wrong side of history.

The communist government was busy abolishing private property and the family business and all of its assets, including the family home, were "volunteered" into the hands of the state.

"You had to volunteer," Zhang Qian tells me. "I wasn't even born then so I can't say I'm regretful, but surely my life would be different now if history had been different."

A scissor heiress marooned among the paper clips, just one of many millions of lives altered by the turbulent course of Chinese politics.

So began decades of state control of the company, a period from which it is has only recently emerged.

By the 1990s the payroll had mushroomed to 2,500 employees, and the cutting and sharpening machines were running full tilt, producing 20 million pairs of scissors and knives a year.

They included some rather low-end products, and that's how things could well have remained were it not for another turn of history.

By the late 1990s, China had begun the large-scale restructuring and privatisation of many of its state-owned companies.

In the year 2000 the state divested itself of 75% of Zhang Xiaoquan's shares.

Like many Chinese businesses that emerged, blinking, into the bright new economic reality, it has had to find its feet.

About 1,000 jobs were shed - gradually and through natural wastage they tell me. The volume of items being produced was dramatically reduced.

"The history of the private company and professional chief executive is short in China," Jiang Shashan, manager of the company's branding department, tells me.

"Our main plan is to transform ourselves from a manufacturer to a brand operator. In the past we believed that 'good wine sells itself,' and focused only on production."

Earlier this year, for the first time, representatives took the company's products to the Frankfurt Trade Fair, one of the world's largest.

They are also now, of course, using the internet to help sell their goods and are developing new product lines.

But there still remains one major obstacle in the way of building an export market.

"Chinese scissors are different from western scissors," Mr Ding tells me. "In Europe and America, the blade is longer and the handle is shorter because they are mainly used to cut paper.

"But in China scissors are used to cut paper, food, cloth and even to repair shoes."

The company is now in discussions to import advanced machinery from Germany to help make products of a size and shape more suited to the foreign market.

A total of 350 years after it was founded, Zhang Xiaoquan still faces challenges. There is an on-going trademark dispute and - inevitably for China - the scourge of counterfeit goods.

But perhaps now it has a chance to really capitalise on its heritage and turn itself from a well-known Chinese name into a truly global brand.

After all, marketing folk will tell you, a story is much easier to sell than a product and Zhang Xiaoquan has quite a story to tell.
Posted by Mercury at 3:46 PM