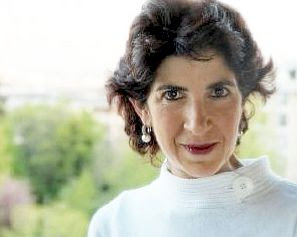 Symmetry sits down with Fabiola Gianotti, who recently finished an eventful four years as spokesperson for the ATLAS experiment at the Large Hadron Collider.

Physicist Fabiola Gianotti, one of the two experiment leaders who announced the discovery of a Higgs-like particle last summer, recently stopped by Stanford University to deliver the physics department’s annual Hofstadter Lectures. Symmetry writer Lori Ann White took the opportunity to interview Gianotti about her time as spokesperson of the ATLAS experiment; her nomination to be Time magazine’s 2012 Person of the Year; the future of the Large Hadron Collider; and, of course, Gianotti’s use of the oft-maligned Comic Sans font.

S: How is life different now that you've finished your term as ATLAS spokesperson?

FG: It's a different life (laughs). Of course the four years as spokesperson were unique—a great time, a very special scientific and human adventure. Unforgettable.

Now I am back to doing more hands-on work, which is different but is equally interesting and stimulating. I like my “new life.” I feel pretty much like a post-doc, and I am working with many young people.

S: What are your impressions of your time as spokesperson now?

FG: I'm extremely grateful to the ATLAS collaboration for giving me such an important and prestigious opportunity. The past four years have been very intense for the whole LHC community—accelerator, experiments, computing—very demanding, every day a new challenge. For sure we didn’t get bored!

The huge number of satisfactions and accomplishments since the LHC started operation at the end of 2009 reward decades of hard work by the community. People should keep in mind that the Higgs boson was not discovered in a few months.

From a more personal point of view, it was for me very enriching to work with so many competent, motivated, enthusiastic and dedicated ATLAS colleagues, in particular the young people. There is a very strong team spirit in ATLAS, which has allowed us to face in the best way difficulties and challenges and savor together several outstanding accomplishments.

S: What do you consider your best accomplishment as spokesperson?

FG: Frankly, I don’t know. I have tried to do my best for the experiment as every other ATLAS colleague. What we accomplished is the result of this collective work, over the years.

S: Do you feel your nomination for Time magazine’s Person of the Year is an indication that the public doesn't understand how collaborations work?

FG: All the people who have contributed to the LHC should have been runners-up for Time’s Person of the Year. But I guess this would have been unpractical.

I am obviously honored to have been selected by Time, but I consider myself to be there as a representative of a much bigger community, so I share this honor with my ATLAS and CMS colleagues, as well as the LHC accelerator team and all the people who have been working on the LHC project over the years.

I think it's positive that Time magazine has chosen a representative from science and research as one of the runners-up. It’s a very good demonstration that society values knowledge.

S: How has the discovery of the Higgs changed your life?

FG: It has changed it in that I have now much stronger relationships with people outside our field. The discovery of the Higgs boson has raised a big interest in society. I've had the chance to give a few public lectures since the 4th of July. At each time, the attendance is huge, and people ask very good questions that indicate their genuine interest and that they have prepared themselves. I also receive a huge number of mails from young people, in particular teenagers and undergrad students, who would like to know more about the Higgs boson, the LHC, how to become a scientist, etc. It's really very nice to see how much people are interested in fundamental knowledge.

S: I have to ask. Why do you use Comic Sans in your slides?

FG: Because I like it. It's so cute. As you see, I didn't change it [for the Hofstadter Lectures]. I find it a sweet and pleasant font.

S: What do you think of the reactions to your use of the font?

FG: (laughs) I was amazed. It made such a big splash. I learned that a person in the UK is running a campaign to rename Comic Sans to Comic CERN.

S: What future news do you anticipate coming out of the LHC experiments?

FG: Now that we have discovered a new particle, we are going to measure it in detail, so I expect many more nice results about the Higgs boson to come out in the next months.

For the rest, I have no idea. I am serious. The LHC has been conceived and built to address a long list of questions, of which the existence of the Higgs boson is only one. There are many others: the composition of dark matter, the origin of the matter/antimatter asymmetry in the universe, the unification of forces, etc.

So we will continue to work and hopefully we will be able to solve, at least partially, some of these issues. We will see what surprise nature has set aside for us.

I think the best reward will be to find something totally unexpected. So I would say I don't know today what future news to anticipate. But I hope it will be something very intriguing.