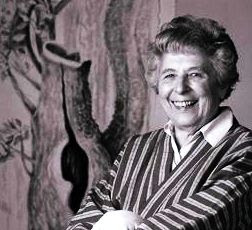 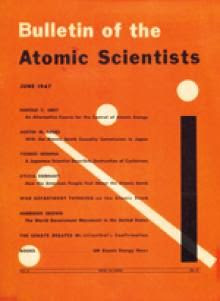 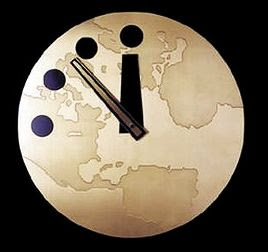 Martyl Langsdorf's artwork symbolized the Nuclear Age with its minute hand near midnight, and presumed annihilation. The Midwestern artist was also known internationally for her abstract landscapes.

Martyl Langsdorf, the artist who created the widely known Doomsday Clock for the first cover of the Bulletin of Atomic Scientists, died March 26 at a rehabilitation facility near her home in suburban Chicago of complications from a lung infection. She was 96.

Since its introduction in 1947, the drawing of the Doomsday Clock has kept watch as international incidents flared. The clock is a symbol of the Nuclear Age, whose minute hand moves closer to midnight — and presumed annihilation — with each major immediate danger.

The clock hands can also move backward, if tensions cool.

The hand has moved only 20 times during the past 65 years. It currently stands at five minutes to midnight.

Langsdorf, who worked in various media including painting, printmaking, drawing, murals and stained-glass design, made the leap from the art world into the controversy over atomic bombs through her husband.

Alexander Langsdorf Jr. was a nuclear scientist from a prominent St. Louis family. During World War II, he helped develop the atomic bomb, then joined other scientists in trying to persuade President Truman not to drop it on Japan. He helped start the Bulletin of the Atomic Scientists, an advocacy group formed in 1945 by Manhattan Project scientists to warn the public of the dangers of nuclear weapons and power.

"She understood the deep anxiety of the scientists in 1947, and the urgency of preventing the spread or use of nuclear weapons," said Kennette Benedict, executive director of the Bulletin since 2005. "With the clock design, she gave the world a symbol that is even more potent today."

Martyl Suzanne Schweig was born March 16, 1917, into a St. Louis family that embraced the arts. Her father, Martin, owned what was the oldest photo studio in St. Louis and photographed famous people. Her mother, Aimee, was an accomplished artist who taught at the private Mary Institute.

Martyl learned to draw during Saturday morning art lessons at the St. Louis Art Museum. By age 11 she was considered a prodigy.

Before the couple moved to Chicago in 1943, her husband and a fellow scientist built a cyclotron at Washington University to secretly produce the first plutonium for the Manhattan Project.

She became internationally known for her abstract landscapes and had some 100 solo exhibitions during her long career, in addition to many group shows. Her works have been displayed in museums throughout the country.

The design of the Doomsday Clock, four dots and two lines, used a recognized object — a clock — and evoked the traditional imagery of the apocalypse (the cry at midnight) and the countdown to zero hour, or a military attack.

"It's such an intuitively tension-building image," graphic designer Michael Bierut, who updated Langsdorf's design in 2007, told the Washington Post. "To be able to reduce something that complex to something so simple and memorable is really a feat of magic."

When the Soviet Union tested its first nuclear weapon in 1949, the scientists who guided the Bulletin moved the hands four minutes closer to midnight.

"The scientists decided to use it imaginatively as a metaphor," Bierut, who is on the Bulletin's board of governors, told the Washington Post. "To wed this almost childish cliche to this fear of the annihilation of the Earth, that's really remarkable."

Martyl Langsdorf designed one of the most enduring visual images of the 20th century, the Doomsday Clock, with its hands ticking toward midnight as a symbol of impending nuclear destruction.

She was already a successful artist when she was asked to design the cover June 1947 issue of the Bulletin of the Atomic Scientists.

Against an orange background, she set a quarter of a clock face, with a black hour hand pointing to the “12” position as a white minute hand approached 11:53.

Even without the accompanying articles about the danger of nuclear weapons, the implication was clear: The fate of the world was in doubt unless an escalating arms race could be stopped before it reached the doomsday hour of midnight.

It was the first and last magazine cover that Langsdorf designed.

Two years later, in 1949, the Soviet Union tested its first nuclear weapon, and the Cold War began in earnest. The scientists who guided the bulletin - including Langsdorf’s husband, nuclear physicist Alexander Langsdorf Jr - reconfigured the image of the Doomsday Clock by moving its hands four minutes closer to midnight.

In one stroke, Langsdorf’s design had been reinvented as a wide-reaching symbol of the age. A powerful idea was expressed in a visual image containing four dots and two lines.

“The scientists decided to use it imaginatively as a metaphor,” Bierut said. “That’s really a complex thing. To wed this almost childish cliche to this fear of the annihilation of the Earth, that’s really remarkable.”

During World War II, Alexander Langsdorf had helped to develop the atomic bomb as a member of the Manhattan Project. After bombs were dropped on Hiroshima and Nagasaki in Japan, leading to the end of the war, he began to have misgivings. He was one of about 70 scientists who signed a letter to President Harry S. Truman, pointing out the “solemn responsibility” of the United States to control the use of nuclear arms.

Langsdorf’s simple visual image entered pop iconography as an element in songs by the Who, Iron Maiden and Bright Eyes. It was featured in novels and nonfiction books and became a near-universal symbol of the dangers lurking in the modern world.
In 2007, Langsdorf recalled a visit to Japan with her husband in the 1970s.

“We were on a train that stopped in Hiroshima and everybody gets off to look at the monument,” she said. “He didn’t get off the train. He refused to. And he had tears in his eyes, he was so upset at that whole thing.”

Martyl Suzanne Schweig was born March 16, 1917, in St Louis. Her mother was an acclaimed artist, and her father was a photographer.

She studied piano and violin before focusing on painting at age 11. As a teenager, she had a private showing and sold a painting to composer George Gershwin, who was visiting St Louis.

As a student at Washington University in St. Louis, she once finished second in a playwriting contest. Third place went to a fellow student named Thomas L. Williams, who became better known as Tennessee Williams.

Langsdorf, who signed her work “Martyl” (pronounced mar-TILL), was also an artist with the Works Progress Administration, a Depression-era program that, among other things, employed artists to paint murals in public buildings. In the early 1940s, she painted a mural highlighting African American history at the Recorder of Deeds Building in Washington.

She and her husband were married in 1941 and moved to Chicago in 1943. After 1953 they lived in a landmark house in Schaumburg, designed by architect Paul Schweikher.

Alexander Langsdorf spent most of his career at the Argonne National Laboratory before his death in 1996.

Langsdorf was resigned to being known as the “clock lady,” but she liked to point out that she had an 80-year career as a painter and printmaker. Her art was included in exhibitions at the Art Institute of Chicago, the Los Angeles County Museum of Art, the St. Louis Art Museum and other prestigious venues.

Her work, which consists largely of landscapes and still lifes, is in the permanent collections of many museums, including the Smithsonian American Art Museum and Hirshhorn Museum and Sculpture Garden in Washington. At the time of her death, she was preparing for a new gallery exhibition in Chicago.

Since 1947, Langsdorf’s Doomsday Clock reappeared often on the cover of the Bulletin of the Atomic Scientists, reflecting the changing state of the world.

From 1991 to 1995, during an era of arms reductions, the hands were pushed back to 11:43. The closest the clock has ever come to midnight was in 1953, when it reached 11:58 after the United States tested its first hydrogen bomb. A panel of scientists now meets each year to set the time of the Doomsday Clock, reflecting newfound worries about climate change and bioterrorism, as well as nuclear arsenals. When the panel released its most recent assessment in January, it concluded that, in doomsday time, it is five minutes to midnight.