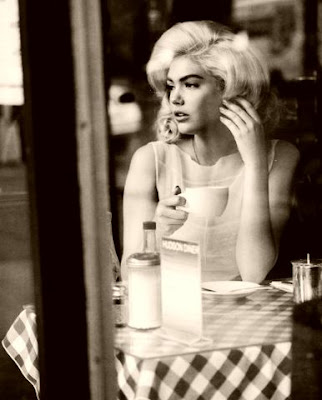 "Artists Who Drink Crazy Amounts of Coffee. (Balzac Was a 50-Cup-a-Day Man.)"

Coffee! It is the great uniting force of my Daily Rituals book. It’s what brings together Beethoven and Proust, Glenn Gould and Francis Bacon, Jean-Paul Sartre and Gustav Mahler. This should hardly be surprising. Caffeine is the rare drug that has a powerful salutary effect—it aids focus and attention, wards off sleepiness, and speeds the refresh rate on new ideas—with only minimal drawbacks. And the ritual of preparing coffee serves for many as a gateway to the creative mood. Balzac wrote:


“Coffee glides into one’s stomach and sets all of one’s mental processes in motion. One’s ideas advance in column of route like battalions of the Grande Armée. Memories come up at the double, bearing the standards which will lead the troops into battle. The light cavalry deploys at the gallop. The artillery of logic thunders along with its supply wagons and shells. Brilliant notions join in the combat as sharpshooters. The characters don their costumes, the paper is covered with ink, the battle has started, and ends with an outpouring of black fluid like a real battlefield enveloped in swaths of black smoke from the expended gunpowder. Were it not for coffee one could not write, which is to say one could not live.”

Now, it's possible that Balzac overdid it. He ended up suffering from stomach cramps, facial twitches, headaches, and high blood pressure, and he died of heart failure age 51. Perhaps a better model is The Wonderful Wizard of Oz author L. Frank Baum, who would get up at about 8 a.m. and eat a hearty breakfast, accompanied by four or five cups of strong coffee with cream and sugar. Or the mathematician Paul Erdös, who fueled his long work hours with espresso shots and caffeine tablets (and amphetamines—more on those in the next entry). “A mathematician,” Erdös liked to say, “is a machine for turning coffee into theorems.” Or there's David Lynch, who, before he became an international spokesperson for Transcendental Meditation, was a devoted acolyte of a certain Los Angeles diner:


“For seven years I ate at Bob’s Big Boy. I would go at 2:30, after the lunch rush. I ate a chocolate shake and four, five, six, seven cups of coffee—with lots of sugar. And there’s lots of sugar in that chocolate shake. It’s a thick shake. In a silver goblet. I would get a rush from all this sugar, and I would get so many ideas! I would write them on these napkins. It was like I had a desk with paper. All I had to do was remember to bring my pen, but a waitress would give me one if I remembered to return it at the end of my stay. I got a lot of ideas at Bob’s.”

Other artists drank moderate amounts of coffee but had elaborate preparation rituals. Beethoven's breakfast was coffee, which he made himself with great care—he determined that there should be 60 beans per cup, and he often counted them out one by one for a precise dose. The Danish philosopher Søren Kierkegaard "had his own quite peculiar way of having coffee," according to the biographer Joakim Garff. "Delightedly he seized hold of the bag containing the sugar and poured sugar into the coffee cup until it was piled up above the rim. Next came the incredibly strong, black coffee, which slowly dissolved the white pyramid." Then he gulped the whole thing down in one go.

But, wait, what about tea? I did not run across any reckless tea-binging artists in my research, although Samuel Johnson was said to drink many cups a day. The American composer John Adams told me that he works in his studio from 9 a.m. until 4 or 5 in the afternoon, taking breaks to make “endless cups of green tea.” Simone de Beauvoir started her day with tea, and Tolstoy took a cup with him to his studio after breakfast. And just the other day the Awl provided a glimpse of the singer Morrissey's daily ritual: "As soon as I wake up, I must have tea."

Just be careful not to let the coffee (or tea) be the only thing fueling your creative work. It should be a means of getting the ideas flowing, not a substitute for having the ideas in the first place. As Balzac noted, “Many people claim coffee inspires them, but, as everybody knows, coffee only makes boring people even more boring.”
Posted by Mercury at 1:25 PM