Who [or what] are the true explorers? 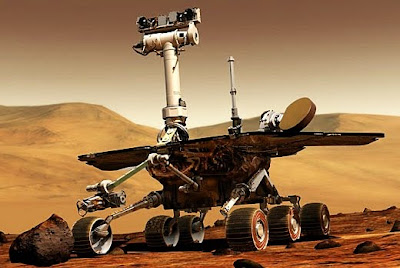 I'm not too sure that this is a real question. What difference does it make? And, doesn't it all hinge on definition? And down the road will the question be asked again when artificial intelligence is common place?

"Should NASA's Mars Rover be compared to Columbus?"

All or none, suggest two astronomers in the current Space Policy journal, arguing that how we define "exploration" may set the success or failure of NASA's future.

Right now, that future looks very much at risk with the blue-ribbon "Augustine Commission" panel report last month calling for either adding about $3 billion a year to the agency's coffers or calling off the whole astronaut thing.

"For too long we have looked at the history of exploration selectively, seeking to find the antecedents which justify our own vision of exploration: as science, as human adventure, as geopolitical statement," write Daniel Lester of the University of Texas, Austin, and Michael Robinson of Hillyer College in West Hartford, Conn. "This is a definitional fight which cannot be won."

So, the astronomers call for redefining exploration to include endeavors such as the Hubble space telescope as much as future Mars astronauts picking up pebbles in the Red Planet. That may sound like space scientists whining for more money (where they already get about $6 billion of NASA's $18 billion budget), but defining exploration too narrowly as just humans in space risks further trapping the space agency, they warn, in the budget bind that resulted when the Apollo moon missions ended in the 1970's and funding dropped. The last few flights of the space shuttle are already booked, and its rocket replacement is looking further and further away with the federal deficit deepening.

NASA leans heavily on the word "exploration" in its strategic plans, the pair write, particularly after the 2003 Columbia tragedy, which killed seven astronauts, who were cited as explorers in the accident investigations report. Further, the Bush Administration's 2004 "Vision for Space Exploration" plans, which called for astronauts returning to the moon by 2020, made similar appeals to the idea of exploration.

"The historical record offers a rich set of examples of what we call exploration," Lester and Robinson note. "Christopher Columbus sailing to the New World, Roald Amundsen driving his dogs towards the South Pole, and Neil Armstrong stepping into the soft dust of the Moon."

But is Columbus's discovery — an accident — really exploration, they ask? Or Amundsen's trip to the South Pole, a geometric point well understood for millennia? Or even Armstrong taking an 8-day trip to a rock already visited by probes for years before his arrival?

A 1990 blue-ribbon panel on NASA's future (also led by the same Norm Augustine, then head of the defense industry's Martin Marietta corporation) made the case for astronaut flights, noting "the involvement of humans is the essence of exploration." But, "Exploration without science is merely tourism," Harvard astronomer Robert Kirshner argued in 2005, speaking as head of the American Astronomical Society. On the other hand, Planetary Society chief Louis Friedman says, "Exploration" = "Adventure" + "Discovery," and doesn't have to involve science. "To him, astronomy with telescopes is perhaps not a form of exploration at all.," write the Space Policy report authors.

"Is it all about rocks?" ask Lester and Robinson. NASA in its exploration plans, from the moon to Mars to (possibly) asteroids, follows the tradition of explorers planting flags on new territory. Werner von Braun, the German war-rocketeer-turned-NASA-engineer, envisioned just such an exploration path, most famously displayed in Collier's magazine articles from 1952 to 1954, after a childhood immersed in thrilling news report of polar explorers. "Renaissance voyagers during the 'Age of Discovery' viewed other lands — Asia, Africa, and the Spice Islands — as the goal of their voyages. Oceans, on the other hand, were treated as highways rather than habitats, a medium to traverse rather than to be investigated," they write. Polar explorers looked for snow piles to plant flags on, and deep sea explorers sought the ocean's sandy floors. "This penchant for visiting rocks in the name of 'exploration' leaves many kinds of space science at a disadvantage," the astronomers write.

NASA's $79 million Lunar Crater Observation and Sensing Satellite scientists this month reported water frozen in lunar craters, a finding that has revived hopes for human moon outposts. But Lester and Robinson note, "From scientific and budgetary points of view, one could make a case that NASA should abandon the human lunar outpost idea altogether and invest its money in telerobotic exploration of the Moon, a project that would cost a fraction of a manned outpost. The same can be said for the exploration of Mars."

That's nice, they say, but then add, "However impressive have been the gains of robotic exploration, it is unlikely that Congress or NASA will abandon human space flight on purely practical grounds to focus solely on scientific goals. If human space flight has offered poor returns for science, it has paid off handsomely in symbolic and geopolitical terms." Landing a man on the moon stands as a signal U.S. achievement, one referenced as recently as President Obama's acceptance speech last year.

So what to do? First we should accept that exploration means different things to different people, they argue, and then move on to a "hybrid" space exploration program that incorporates astronauts, robots and nations together in efforts that make economic sense to a public in the midst of a deep recession.

"That exploration has deep roots in human history is clear. Yet meanings of exploration continue to change. The models of Apollo, the Space Shuttle and the International Space Station — all conceived in an era before advanced telerobotics — now have limited value in predicting the future course of space exploration," the pair argue. "We now face a vision of exploration that is different from that of our ancestors."
Posted by Mercury at 7:00 AM