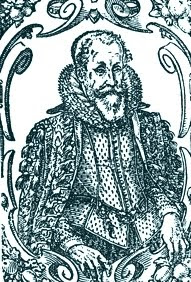 "When students of the world's first chemistry professor came into the lab, they had to leave their swords behind, refrain from spitting on the floor, and keep whatever experiments they were doing a secret. Among the strict rules of conduct, linen aprons were a must, and students were allowed to ask questions only "with modesty and without bothering the teacher,"...." That was 400 years ago at Philipps University, in Marburg, Germany. Now, it is check your 9mm and turn off cell phones. Philipps University is considered the first university to have the world's first chemistry professorship...Johannes Hartmann.

"The Dawn Of Academic Chemistry"

Chemical & Engineering News
When students of the world's first chemistry professor came into the lab, they had to leave their swords behind, refrain from spitting on the floor, and keep whatever experiments they were doing a secret. Among the strict rules of conduct, linen aprons were a must, and students were allowed to ask questions only "with modesty and without bothering the teacher," according to archival documents.

As Philipps University, in Marburg, Germany, celebrates the 400th anniversary of the world's first chemistry professor post, it's safe to say that the spirit of some of these medieval rules still applies in chemistry labs worldwide. The man who wrote the regulations was Johannes Hartmann, who got the first chemistry post in 1609. Unlike many of the scholars of that era, Hartmann had neither a noble family nor a wealthy one. He was a weaver's son, who initially apprenticed as a bookbinder before embarking on a path to academic chemistry.

Back in the early 1600s, alchemy was still ubiquitous, but the sciences were also making their debut in academia. Professorships in medicine, surgery, and pharmacy had already been established at a few universities in Europe. Although pharmacy research in those days certainly had commonalities with the burgeoning field of chemistry, the Marburg appointment in 1609 was the first "by name" chemistry faculty appointment, says Jonathan Simon, a science historian at the University of Lyon, in France, a view echoed by five other historians whom C&EN interviewed.

The fact that Marburg, a rather small town in central Germany, hosted the first chemistry academic post "is not as odd as it sounds," says Lisa Rosner, a professor of history at Stockton College, in New Jersey. In those days, "Marburg was a center of the radical Reformation, which intersected in various interesting ways with innovative chemical ideas," she says. Indeed, Marburg's Philipps was Germany's first protestant academic institution.

Furthermore, Marburg was under control of a nobleman named Moritz von Hessen, who was often called "the scholar," notes Christoph Friedrich, a pharmacy historian at Philipps. Von Hessen was a Renaissance man, versatile in several languages and knowledgeable in fine arts, astronomy, and alchemy. His court adopted the teachings of Paracelsus, a medical doctor from the 1500s who is probably best known for developing laudanum, an opium-based painkiller. Paracelsus was also the first known person to use inorganic substances as remedies in addition to giving herbs as drugs, Friedrich says.

The route toward the first academic chemistry post started when Hartmann won a scholarship to study mathematics and then was hired by von Hessen to be a mathematician and astronomer in his court. Working in von Hessen's court was Hartmann's lucky break. Not only was he exposed to the medicinal chemistry notions of Paracelsus, but von Hessen also helped Hartmann get a professorship in mathematics, Friedrich says.

While working as a professor in mathematics at Phillips, Hartmann studied medicine and then approached his benefactor, von Hessen, with the idea of establishing a professorship in the then newfangled scientific area called chemiatrics. The idea came to fruition in 1609. Hartmann set up his chemistry labs in the university's former "convent of the discalced Carmelites," a religious order that favored being barefoot, or wearing sandals at most.

In the new lab, Hartmann and his colleagues developed special cures for diseases of the ears, nose, and mouth and so-called expelling remedies such as laxatives, emetics (which induce vomiting), diuretics, and diaphoretics (which induces sweating), Friedrich says. Many of his remedies are published in the book "Praxis Chymiatrica" and were fired minerals or metals.

Hartmann and his colleagues also tried extracting substances from plants with water and oils, using ovens for distillation and sublimation and other instruments such as bulbs. They carefully monitored temperature by keeping an eye on the color of the fire in the oven because thermometers were not invented yet. This was similar to pharmacy research at the time, "but the rather precise experimental conditions, which were measured and monitored with newly invented instruments, signaled the beginning of a new scientific discipline," says Gernot Frenking, a chemistry professor at Philipps. "That's chemistry."

Although Hartmann's first batch of chemistry students numbered only six, by 1616 that total had risen to 27 or 28, Friedrich notes. The students came from all over Germany, as well as from Switzerland, France, England, Denmark, and Poland.

Researchers congregated on Oct. 30 in Marburg for a conference to celebrate the 400th anniversary. Gerhard Ertl, 2007 Chemistry Nobel Laureate, and Humboldt Foundation President Helmut Schwarz were among the high-profile scientists scheduled to give lectures at the session. "I do hope that we as chemists are still as curious as our predecessors were," Schwarz tells C&EN.

In keeping with one of Hartmann's lab regulations, attendees of the anniversary conference had to leave their swords behind for the occasion but were encouraged to speak about lab results openly.
Posted by Mercury at 5:13 AM