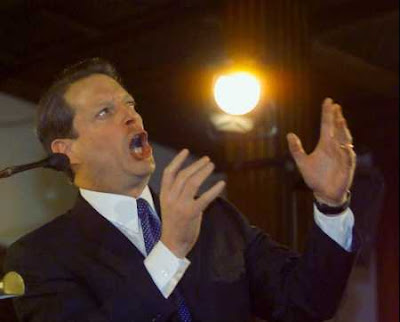 One wonders if this wasn't a well-planned scheme to make a lot of money...advocate global warming, invest in "green" enterprises, wait for government stimulus, rake in the "greenbacks".

The New York Times
WASHINGTON — Former Vice President Al Gore thought he had spotted a winner last year when a small California firm sought financing for an energy-saving technology from the venture capital firm where Mr. Gore is a partner.

Mr. Gore and his partners decided to back the company, and in gratitude Silver Spring retained him and John Doerr, another Kleiner Perkins partner, as unpaid corporate advisers.

The deal appeared to pay off in a big way last week, when the Energy Department announced $3.4 billion in smart grid grants. Of the total, more than $560 million went to utilities with which Silver Spring has contracts. Kleiner Perkins and its partners, including Mr. Gore, could recoup their investment many times over in coming years.

Silver Spring Networks is a foot soldier in the global green energy revolution Mr. Gore hopes to lead. Few people have been as vocal about the urgency of global warming and the need to reinvent the way the world produces and consumes energy. And few have put as much money behind their advocacy as Mr. Gore and are as well positioned to profit from this green transformation, if and when it comes.

Critics, mostly on the political right and among global warming skeptics, say Mr. Gore is poised to become the world’s first “carbon billionaire,” profiteering from government policies he supports that would direct billions of dollars to the business ventures he has invested in.

Representative Marsha Blackburn, Republican of Tennessee, asserted at a hearing this year that Mr. Gore stood to benefit personally from the energy and climate policies he was urging Congress to adopt.

Mr. Gore says that he is simply putting his money where his mouth is.

In an e-mail message this week, he said his investment activities were consistent with his public advocacy over decades.

“I have advocated policies to promote renewable energy and accelerate reductions in global warming pollution for decades, including all of the time I was in public service,” Mr. Gore wrote. “As a private citizen, I have continued to advocate the same policies. Even though the vast majority of my business career has been in areas that do not involve renewable energy or global warming pollution reductions, I absolutely believe in investing in ways that are consistent with my values and beliefs. I encourage others to invest in the same way.”

Mr. Gore has invested a significant portion of the tens of millions of dollars he has earned since leaving government in 2001 in a broad array of environmentally friendly energy and technology business ventures, like carbon trading markets, solar cells and waterless urinals.

He has also given away millions more to finance the nonprofit he founded, the Alliance for Climate Protection, and to another group, the Climate Project, which trains people to present the slide show that was the basis of his documentary “An Inconvenient Truth.” Royalties from his new book on climate change, “Our Choice,” printed on 100 percent recycled paper, will go to the alliance, an aide said.

Other public figures, like Speaker Nancy Pelosi and Robert F. Kennedy Jr., who have vocally supported government financing of energy-saving technologies, have investments in alternative energy ventures. Some scientists and policy advocates also promote energy policies that personally enrich them.

As a private citizen, Mr. Gore does not have to disclose his income or assets, as he did in his years in Congress and the White House. When he left government in early 2001, he listed assets of less than $2 million, including homes in suburban Washington and in Tennessee.

Since then, his net worth has skyrocketed, helped by timely investments in Apple and Google, profits from books and his movie, and scores of speeches for which he can be paid more than $100,000, although he often speaks at no charge.

He is a founder of Generation Investment Management, based in London and run by David Blood, a former head of Goldman Sachs Asset Management (the firm was quickly dubbed Blood and Gore). Mr. Gore earns a partner’s salary at Kleiner Perkins. He has substantial personal finances invested at both firms, officials of the companies said.

He also serves as an adviser to high-profile technology companies including Apple and Google, relationships that have paid him handsome dividends over the last eight years.

Mr. Gore’s spokeswoman would not give a figure for his current net worth, but the scale of his wealth is evident in a single investment of $35 million in Capricorn Investment Group, a private equity fund started by his friend Jeffrey Skoll, the first president of eBay.

Ion Yadigaroglu, a co-founder of Capricorn, said that Mr. Gore does not sit on the fund’s investment committee, but obviously agrees with the partners’ strategy of putting long-term money into promising ventures in energy, technology and health care around the globe.

“Aspirationally,” said Mr. Yadigaroglu, who holds a doctorate from Stanford in astrophysics, “we’re trying to make more money than others doing the same thing and do it in a way that is superior in ethics and impacts.”

Mr. Gore has said he invested in partnerships and funds that try to identify and support companies that are advancing cutting-edge green technologies and are paving the way toward a low-carbon economy.

He has a stake in the world’s pre-eminent carbon credit trading market and in an array of companies in bio-fuels, sustainable fish farming, electric vehicles and solar power.

Mr. Gore also has substantial interests in technology, media and biotechnology ventures that have no direct tie to his environmental advocacy, an aide said.

Mr. Gore is not a lobbyist, and he has never asked Congress or the administration for an earmark or policy decision that would directly benefit one of his investments. But he has been a tireless advocate for policies that would move the country away from the use of coal and oil, and he has begun a $300 million campaign to end the use of fossil fuels in electricity production in 10 years.

But Marc Morano, a climate change skeptic who until recently was a top aide to Senator James M. Inhofe, Republican of Oklahoma, said that what he saw as Mr. Gore’s alarmism and occasional exaggerations distorted the debate and also served his personal financial interests.

Mr. Gore has testified numerous times in support of legislation to address climate change and to revamp the nation’s energy policies.

He appeared before the House Energy and Commerce Committee in April to support an energy and climate change bill that was intended to reduce global warming emissions through a cap-and-trade program for major polluting industries.

Mr. Gore, who shared the 2007 Nobel Peace Prize for his climate advocacy, is generally received on Capitol Hill as something of an oracle, at least by Democrats.

But at the hearing in April, he was challenged by Ms. Blackburn, who echoed some of the criticism of Mr. Gore that has swirled in conservative blogs and radio talk shows. She noted that Mr. Gore is a partner at Kleiner Perkins, which has hundreds of millions of dollars invested in firms that could benefit from any legislation that limits carbon dioxide emissions.

“I believe that the transition to a green economy is good for our economy and good for all of us, and I have invested in it,” Mr. Gore said, adding that he had put “every penny” he has made from his investments into the Alliance for Climate Protection.

“And, Congresswoman,” he added, “if you believe that the reason I have been working on this issue for 30 years is because of greed, you don’t know me.”
Posted by Mercury at 5:48 AM