Rocket emissions and the environment 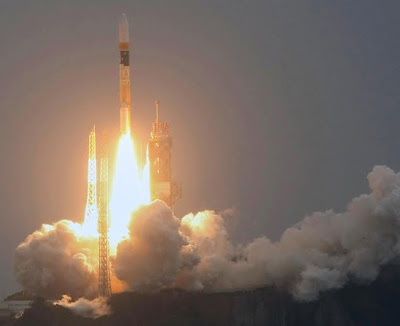 All rockets and the Shuttles do pollute.

What's the environmental impact of going into space?

Slate
We hear so much about the environmental impacts of transportation. What about space travel? How do rockets affect the atmosphere?

There's a simple reason why we hear a lot more about cars, ships, and planes than we do about rocket ships: There are lot more of them. Each flight into space does have a small impact on the planet it leaves behind, but—for the moment, at least—these launchings are very rare. Only a couple of rockets blast off every week around the world. As a result, space travel doesn't register on most environmentalists' radars.

One issue that might deserve some attention has to do with the depletion of stratospheric ozone, a topic we discussed a few months back. Rocket engines emit reactive gases that cause ozone molecules to break apart. They also discharge microscopic particles of soot and aluminum oxide, which may increase the rate at which those gases wreak havoc. Each variety of rocket propellant delivers its own blend of ozone-depleting substances: Solid propellants, for example, are more damaging than liquid ones, though exactly how much is unclear. Engine design matters, too. To make matters worse, spacecraft dump some of these pollutants directly into the upper and middle stratosphere, where they can start causing damage immediately.

Despite all this, spacecraft contribute very little to the global ozone problem. In a recent paper on the topic, researcher Martin Ross and three co-authors estimated that rocket launches are responsible for roughly 1 percent of the total ozone depletion that can be attributed to human causes. That percentage may rise, however, as more traditional pollutants, like CFCs, start to fade from the atmosphere (thanks to the 1987 Montreal Protocol). At the same time, the number of launches—for purposes of exploration, tourism, and space-based solar power—is expected to increase. One of the study's co-authors has been quoted as saying, "If left unregulated, rocket launches by the year 2050 could result in more ozone destruction than was ever realized by CFCs."

All that stratospheric damage may increase rates of skin cancer and cataracts, but what effect might rockets have on global climate change? The exhaust from space-ship engines does add several kilotons of carbon dioxide to the atmosphere every year. But that's just a smidgen compared with the several hundred kilotons produced by aircraft, as Ross and his co-authors point out. Aircraft, in turn, are responsible for just 2 percent to 5 percent of the world's CO2 emissions. Even with major growth in the space industry, the authors say, it's unlikely that rockets will become a significant issue vis-à-vis climate change.

One wild card, though, are those microscopic particles we mentioned earlier—soot and aluminum oxide. They don't last very long in the stratosphere—only a few years, as opposed to centuries for carbon dioxide—but on a per-unit-of-mass basis, they can be very effective at changing the radiation balance in the atmosphere. The problem is, it's not always clear how they'll change that balance. Bits of aluminum oxide, for example, reflect the visible light from the sun back into space, which cools the Earth. But those same particles can also absorb infrared radiation emanating from the planet's surface, essentially trapping heat the way a greenhouse gas does. Soot, too, can help warm or cool the planet, depending on the size, number, and location of the particles.

Atmospheric scientists do have the models to calculate what the overall climate effects of a given launch might be, even taking the fickle particles into consideration. What they don't have, Ross says, are good enough data on what's actually in those rocket plumes, particularly when it comes to engines using liquid propellants or the new "hybrid" propellants (which use a combination of a solid fuel and a liquid oxidizer).

While this research proceeds, it's worth taking a moment to consider how rocket launches pollute the environment just beyond our borders—namely, the otherwise pristine wilds of outer space. Space journeys leave behind all kinds of debris, including old batteries, jettisoned components, and human refuse. NASA estimates that there are upward of 500,000 pieces of debris larger than one centimeter currently orbiting the planet—not to mention tens of millions of really tiny particles, which can damage sensitive equipment despite their diminutive size. One astrophysicist recently compared our celestial junkyard to a massive Superfund site. If we really want future generations to have the option of enjoying the final frontier, it's worth thinking about how to keep the place clean for them.