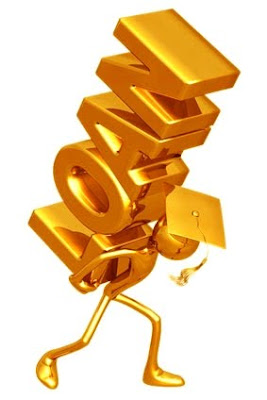 No wonder higher education loans are drifting from private to government sources--they don't want the risks of defaults;

The Kansas City Star
College students are facing a sea change in borrowing to pay for their degrees — unfortunately, many would still be drowning in debt.

The change, perhaps as soon as July, would end the Federal Family Education Loan program that has dominated the federal student loan pool for more than 40 years.

Banks and other private sources would be cut out of the process by the Student Aid and Fiscal Responsibility Act, passed in September by the U.S. House. The measure still must considered by the Senate.

Colleges that once kept a long list of lenders are converting to the Direct Loan Program, in which student loans come directly from the government.

The trend was accelerated by many private lenders dropping out of the business when the economy tanked. That led Congress to pass temporary legislation — expiring in June — to assure that students and families still would be able to get loans for school.

In the last two years, students already were relying more on federal loans. The volume of loans from private sources fell by 52 percent in the 2008-2009 school year, according to a recent report by the College Board, a nonprofit organization that watches trends in higher education.

“Moving to direct lending will … eliminate the uncertainty families have experienced due to the turmoil of the financial markets,” said Secretary of Education Arne Duncan.

That’s all well and good, said Tony George, director of financial aid at the University of Missouri-St. Louis, which is preparing to switch to the Direct Loan Program by December. But the cost of borrowing would remain the same as under the old system.

“Will students get any better interest rates with direct lending? No.”

The balance of outstanding federal loans assumed by students or their parents continues to grow. By 2007-08, two-thirds of four-year undergraduate students had some debt along with their degrees. The average cumulative debt incurred was $27,803, according to the National Center for Education Statistics.

During the same time, 56 percent of graduate education students owed, with the average cumulative debt $40,297. The range was $119,400 for those with medical degrees to $29,975 for those with a master of arts degree.

“Students are big fans of direct lending,” said Amanda Shelton, a member of the Missouri Students Association, which represents the undergraduates at the University of Missouri in Columbia. “But direct lending does not solve the student loan debt problems.

“We would like a lot more grant money, more work study, financial literacy training,” Shelton said. “I need student loans, but I have not taken out any because I remain cognizant of the negative reality of student loans — they bind you to find an excellent job out of college, and in this economy that is next to impossible.”

For the last 10 years, college costs on average rose faster than inflation. Published tuition and fees at public four-year colleges and universities rose at an average annual rate of 4.9 percent beyond general inflation from 1999-2000 to 2009-10, more rapidly than in either of the previous two decades, according to the College Board.

Now some 3,000 other colleges across the U.S. are gearing up to make the switch, including the Metropolitan Community College-Kansas City and Fort Hays State in Kansas.

“I always felt that bankers are professional lenders and why should we get into that game. But it looks like the government is going to force it on us,” said Ed Hammond, Fort Hays State president.

Proponents estimate saving more than $80 billion over 10 years by eliminating the federal subsidies paid to private lenders. They say the money should go into college funding and more grants to students — raising the maximum Pell Grant to $5,500 in 2010-2011.

“President Obama has set a goal for America to once again have the highest proportion of college graduates by the end of the next decade,” Duncan said.

“To get there, we need to increase college access and do a much better job at helping students stay the course and complete their college education.”

The proposed legislation would provide a variety of flexible repayment options. And more grant money is promising, too.

Neotashia Jackson, 32, a single parent and education major at UMKC, works 15 hours a week in the university’s financial aid office. Jackson borrowed all the money going for education, as well as child care for her 2-year-old daughter, rent and food.

“Yes, I’m worried. But the way I see it, I was a licensed cosmetologist and to better myself I had to increase my skill,” she said. “I woke up one day and said, ‘Oh my gosh, how am I going to pay for this?’ ”

“I just hope that when I graduate the government will help me pay back some of this debt,” Jackson said.

Jackson is just the kind of student Cindy Butler, director of financial aid at MCC-Kansas City, worries about under direct lending.

Financial aid offices such as Butler’s this summer were overwhelmed by the crush of federal aid requests from financially strapped students. Because staff was cut under recessionary pressures, she said, “We are not staffed to give students financial counseling and to do default management after they graduate; the private lenders did that.”

Then there is this worry, said Jan Brandow, financial aid director at UMKC: “About 70 percent of the schools are not on direct lending.” If they wait until the last minute to switch and flood the government’s electronic loan communication system, it could collapse under the volume.

Last week Duncan sent a letter to thousands of colleges and universities urging them get ready to use the Direct Loan Program by summer.

But U.S. Sen. Claire McCaskill, a Missouri Democrat, said she thought schools would have plenty of time to change to the Direct Loan Program.

“I would be shocked if something like this were to become effective in the same year that it is passed,” McCaskill said. “It would be more like 2011. If I had to guess or die, the Senate is not likely to even pick up the student aid bill until after it’s done with health care reform.”

[Enter "higher education" in search box for related material.]
Posted by Mercury at 6:46 AM