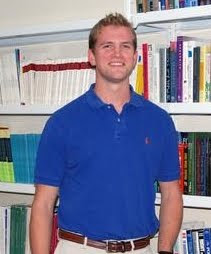 I have been informed that this enterprise has been curtailed and that Matthew Trevithick has become involved in activities at another Mideastern university, thus the request for materials mentioned below are no longer solicited.

Matthew Trevithick spent his college years at Boston University learning about the Middle East and its people.

Now, the Hingham native is working in Iraq to educate some of those people.

“It’s good to be on the ground in the Middle East, because you have to experience it,” the 24-year-old said. “You can’t just be in America and talk about it.”

Trevithick, who graduated in 2008 with a degree in international relations, is the librarian at a new university, American University of Iraq. He is collecting books and working to establish a library for the school, which is Sulaimani, in Iraq’s Kurdish region.

He arrived at American University three months ago after working at the Woodrow Wilson International Center in Washington, D.C., and the Center for Contemporary Arab Studies at Georgetown University.

Trevithick started at the American University of Iraq as an assistant to the provost, primarily writing handbooks and manuals. But like many other employees at this upstart university, he stepped in to fill a position when asked. The liberal arts school had no librarian, and Trevithick accepted the assignment in addition to his other duties.

“This is an all-hands-on-deck enterprise; you don’t just teach a class and go home,” he said. “You ... are constantly working and doing different jobs.”

The American University of Iraq opened in 2007 to offer a Western-style liberal arts education. Classes are taught in English and students study philosophy, computer science, business management, and European and American history. About 400 students are enrolled.

Iraqi President Jalal Talabani is chairman of the university’s board of regents, which includes Nechirvan Barzani. The two men are the top Kurdish leaders in Iraq, heading opposing political parties.

Trevithick’s goal is to make the library as large and dependable as the ones at universities in America.

“At the end of the day, the library needs books, and that’s been one of the bigger challenges – getting the raw books here,” Trevithick said. “The outpouring support is always really high, but it’s also hard to get people to spend the money required to send a few books to Iraq.”

Trevithick started contacting electronic databases such as Lexis Nexis, JSTOR and ProQuest to secure their programs. Now he is conducting a donation drive, asking libraries in the United States to donate books. He is using his bedroom at his parent’s Hingham home as a storage area for donated books that will be sent overseas.

Newcomb said the donations include books on Christianity, economics and political theory, copies of the U.S. Constitution, and books by Tom Brokaw and Studs Terkel.

“I think people like the idea that they can contribute to learning and see it as a positive way for Americans to support Iraq,” Newcomb said.

About 250 books have been donated from all across the United States, but Trevithick still needs to find a donor to pay to ship the books to Iraq.

He will be returning to Hingham in early December for the holidays. On Dec. 17, he will speak at the Hingham Public Library about Iraq, and he hopes to additional donations.

I have been informed that this enterprise has been curtailed and that Matthew Trevithick has become involved in activities at another Mideastern university, thus the request for materials mentioned above are no longer solicited.