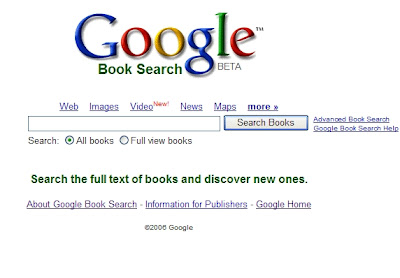 Go for it Google. Google Books has only one significant competitor...Internet Archive .

PhysOrg.com
Google's ambitious plan to scan millions of old, out-of-print books, many of them forgotten in musty university libraries, has turned into one of the biggest controversies in the young company's history.

A broad array of opponents, ranging from Google competitors Microsoft and Amazon to libraries and copyright scholars, has joined forces to oppose Google's proposal to create a comprehensive online repository of the books and split the revenue from access to that catalog with authors and publishers.

Facing a November deadline to revamp the proposal, which Google struck with the book-publishing industry after a class-action lawsuit, the company with the unofficial motto "Don't Be Evil" is fighting the perception among some that the plan is an unseemly power play to seize the lucrative dominance of digital books.

Company co-founder Sergey Brin has said repeatedly in recent weeks that Google is primarily acting with the public good in mind to preserve the world's cultural heritage in old books.

"I've been surprised at the level of controversy there," Brin said at a recent Internet conference in San Francisco. "Because digitalizing the world's books to make them available, there's been nobody else who's attempted it at our scale."

The issue has clearly become more prominent because of Google's vast ambitions -- its dominant search index to more than a trillion of web pages, and its march into digital maps, mobile phones, online video and other sectors of the Internet.

The controversy has shown Google is not that different from other profit-driven corporations, said Siva Vaidhyanathan, a professor of media studies and law at the University of Virginia.

"It really took something this big and grand to show that Google does have problems, and does have vulnerabilities, and can be exploitative," Vaidhyanathan said. "I'm as surprised as anybody that this turned out to be the moment in which Google's true nature came to light."

Google says negotiations are on track to have a revamped proposal ready before the Nov. 9 court deadline. While the search giant also ran afoul of the Justice Department last year over a proposed advertising partnership with Yahoo, even Google acknowledges public scrutiny has grown.

"It's absolutely partially about Google's size," said Daniel Clancy, engineering director of Google Book Search and a lead negotiator with authors and publishers. "If this settlement came out three years ago, what would have been in the press would be very different."

After more than 500 years where most human knowledge was stored in books, the controversy about digital books also "is a big Rorschach test, if you will, for the concerns people have about a digital future," Clancy said.

Google has insisted that its digital books plans, however they ultimately emerge from the ongoing talks, will leave room for competitors.

In an op-ed article in The New York Times, Brin said Google hoped "to unlock the wisdom held in the enormous number of out-of-print books, while fairly compensating the rights holders."

Brin did not even mention the Justice Department's concerns about competitive disadvantage in the article.

The department's filing in the case argues that "other digital distributors may be effectively precluded from competing with Google in the sale of digital library products and other derivative products to come."

For opponents like Pam Samuelson, a copyright expert at the University of California, Berkeley, who helped organize opposition to the digital books plan, Brin's omissions rankle.

"To me that sounds like they don't care what the Department of Justice thinks. It sounds a little like hubris to me," Samuelson said. "Google has done a great job of shining the spotlight on things about the settlement that people would find attractive, but they don't tell you some of the stuff that would be most worrisome about it."

Google's partnership with authors and publishers to scan old books is not the future of publishing, Clancy said. "We've viewed the settlement as a solution into the past for the books that would otherwise be left behind in this digital revolution."

While Google would share a majority of its revenue from old books with authors and publishers, it is working on a different service for books published in the future.

That future is "Google Editions," an online service planned next year that will allow readers to buy digital books from an array of booksellers that can be read on any device with a web browser, including smart phones.

Given Google's growth, Clancy said journalists are more apt to write stories about "Big Google" controlling the world's knowledge than what he said is the company's more limited vision for old books.

"One company controlling a universal digital library, that's very scary," Clancy said. "But when you think of one company trying to bring digital books back to life so they are more accessible, that's a lot less scary."
Posted by Mercury at 1:54 PM

i have found it very useful rereading such luminaries as Anatole France and his book Penguin Island. it is very convenient to reacquaint myself with certain ideas within chapters. an amazing age we live in.