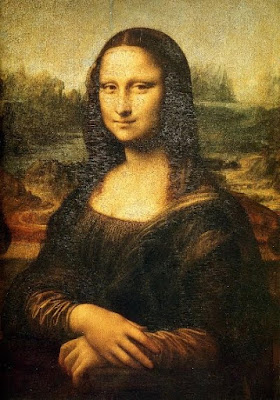 Leonardo's Mona Lisa's smile is being scrutinized by scientists and claiming that the "smile" significance is a function of the human eye.

The secret behind Mona Lisa's enigmatic smile has been explained by scientists who believe it changes depending on which part of the eye sees it first.

Newsweek
One of the charms of the world's most famous painting is that she appears radiant one moment and then serious and sardonic the next.

Now scientists claim to have come up with an answer to her changing moods - our eyes are sending mixed signals to the brain.

They believe Mona Lisa's smile depends on what cells in the retina pick up the image and what channel the image is transmitted through in the brain.

Different cells in the eye are designed to pick up different colours, contrasts, backgrounds and foregrounds. Some deal with central vision while others with peripheral.

Depending on what cells picks up the image first depends on what channel they are sent to the brian for interpreting.

These channels encode data about an object's size, clarity, brightness and location in the visual field.

"Sometimes one channel wins over the other, and you see the smile, sometimes others take over and you don't see the smile," said Dr Luis Martinez Otero, a neuroscientist at Institute of Neuroscience in Alicante, Spain, who conducted the study, told New Scientist.

To get a fuller picture of the reasons behind Mona Lisa's vanishing smile, Dr Martinez Otero varied different aspects of the Mona Lisa that are processed by different visual channels, and then asked volunteers whether they saw a smile or not.

To start with, the duo asked volunteers to look at the painting in varying sizes from varying distances. They found the closer you were the more likely you were to see the smile.

Next, Dr Martinez Otero's team compared how light affects our judgement of Mona Lisa's smile. Two kinds of cells determine the brightness of an object relative to its surroundings - "on-centre" cells, which are stimulated only when their centres are illuminated, and allow us to see a bright star in a dark night; and "off-centre" cells, which turn on only when their centres are dark, and allow us to pick out words on a printed page.

Dr Martinez Otero jammed these channels by showing another set of volunteers either a black or white screen for 30 seconds followed by a shot of the Mona Lisa. The black would mute off centre cells while the light on-centre.

Eye gaze also affects how volunteers see the smile, Martinez Otero says. His team used software to track where in the painting 20 volunteers gazed while they rated whether or not Mona Lisa's smile became more or less apparent.

With a minute to gaze at the painting, volunteers tended to focus on the left side of her mouth when judging her as smiling – further evidence that dead-centre vision picks out the smile.

When volunteers had only a fraction of a second to discern her smile, their eyes tended to focus on her left cheek, hinting that peripheral vision plays a role, too.

So did Leonardo intend to sow so much confusion in the brains of viewers, not to mention scientists? Absolutely, Martinez Otero contends. "He wrote in one of his notebooks that he was trying to paint dynamic expressions because that's what he saw in the street."

The research was originally presented at the Society for Neuroscience's annual meeting in Chicago.

In 2000, Margaret Livingstone, a neuroscientist at Harvard Medical School with a side interest in art history, showed that Mona Lisa's smile is more apparent in peripheral visionMovie Camera than dead-centre vision.
Posted by Mercury at 7:34 AM