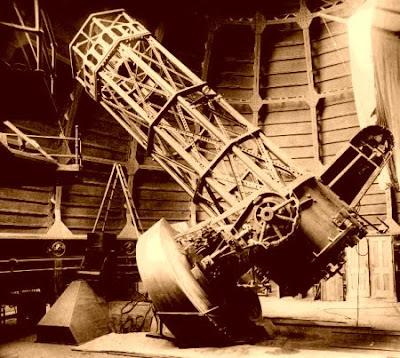 60-inch Telescope
"Superintendent who helped save Mt. Wilson Observatory is raising funds to preserve it"

Los Angeles Times
As the Station fire raged, Dave Jurasevich slept at the facility, working with firefighters to protect the site. Now he's seeking donations for repairs and to improve fire protection there.

Every morning for 19 days, Dave Jurasevich awoke on Mt. Wilson to sunrises darkened by smoke and ash.

Every night, the superintendent of the Mt. Wilson Observatory slept at the site he hoped to protect. He was too worried to catch more than three or four hours of rest a night. When he did sleep, he bedded down on a mattress on the floor of a small office. He was usually hungry. Firefighters slept in the next room.

During those days and nights that Jurasevich, 59, stayed at the observatory in August and September, the fire tore through the Angeles National Forest, burning more than 160,000 acres and becoming the largest wildfire in L.A. County history.

The observatory was seriously threatened three times, he said, but he stayed to help protect a "priceless" structure replete with scientific history.

Now, Jurasevich speaks to community groups about his experiences during the fire and asks for donations to help repair the damaged grounds and improve fire protection. The nonprofit observatory receives most of its funding through private sources, grants and a few site fees.

He sprinkles his presentations with anecdotes: How ash fluttered like snow when the fire began; how he was evacuated from the observatory twice before deciding to stay; how shortly after he recovered from double pneumonia, smoke from the fire gave him bronchitis. His voice still fades from time to time.

"That's a date that is forever burned into my mind," he said. "It will stay with me until the day I die."

Jurasevich, who has been superintendent for three years, was not alone atop the 5,800-foot peak in the San Gabriel Mountains. His assistant, an electrician and the manager of the high-tech telescopes stayed with him, as did several dozen firefighters, including some elite hotshot firefighters assigned to protect the building.

Early on, a fire chief asked him to rank which buildings to save. More than 40 structures sit on the 40-acre site.

Founded in 1904, the Mt. Wilson Observatory has been the birthplace for landmark scientific discoveries, including astronomer Edwin Hubble's finding that the Milky Way is not the only galaxy in the universe and that the universe itself is continually expanding.

Shortly after the fires began, it was clear the observatory might be threatened. It was evacuated twice, but when Jurasevich returned the third time, he decided to stay to help firefighters around the grounds.

Once his decision was made, the fire's ferocity made it too dangerous to leave.

"If we're worried, concerned, there's nothing we can do," said Enlee Lin, Jurasevich's wife of 19 years. "Like all the soldiers in Iraq, all the families here, it's a general feeling: There's nothing you can do about it, just know he is doing his job."

Lin watched the fire from their Alhambra home and tried not to think about him being there. Their two children -- Aaron, 14, and Rachel, 16 -- were a welcome distraction, but at night, she would wait for her husband to call.

During the day, the firefighters cut fire lines and set backfires. Jurasevich helped where he could. Some nights, when it was clear, he would take the firefighters up to the 60-inch telescope and show them planets and constellations.

Jurasevich said he was never in danger. If the flames had engulfed the observatory, he could have taken shelter in the corrugated steel dome that houses the 100-inch Hooker telescope.

The office where he slept was not far from the dome.

In the end, no structures were damaged.

"I'm not a brave man," he said. "I never feared for my life. I knew that dome was a safe haven if that fire ever got to us."

there are still heroes amongst us and that is the good news....