Crocs in the Sahara 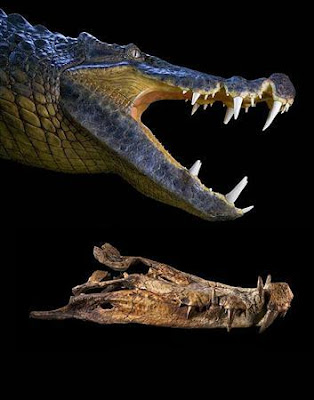 Now wouldn't this give Steve Irwin a smile.

divided up among a half-dozen species of unusual and perhaps intelligent crocodiles, researchers reported on Thursday.

They have given some of the new species snappy names -- BoarCroc, RatCroc, DogCroc, DuckCroc and PancakeCroc -- but say their findings help build an understanding of how crocodilians were and remain such a successful life form.

They lived during the Cretaceous period 145 million to 65 million years ago, when the continents were closer together and the world warmer and wetter than it is now.

"We were surprised to find so many species from the same time in the same place," said paleontologist Hans Larsson of McGill University in Montreal who worked on the study.

"Each of the crocs apparently had different diets, different behaviors. It appears they had divided up the ecosystem, each species taking advantage of it in its own way."

Larsson and Paul Sereno of the University of Chicago, funded by National Geographic, studied the jaws, teeth and what few bones they had of the crocodiles. They also did CT scans, which are computer-enhanced x-rays, to see inside the skulls.

Two of the species, DogCroc and DuckCroc, had brains that looked different from those of modern crocodiles.

"They may have had slightly more sophisticated brain function than living crocs because active hunting on land usually requires more brain power than merely waiting for prey to show up," Larsson said in a statement.

RatCroc, a new species formally named Araripesuchus rattoides, was found in Morocco and would have used its buck-toothed lower jaw to grub for food.

DuckCroc represents new fossils found in Niger from a previously known species called Anatosuchus minor. It would have eaten grubs and frogs with its broad snout.

The more ferocious BoarCroc was also 20 feet long but ran upright and had a jaw built for ramming, with three pairs of knife-like teeth.

Some walked upright with their legs under the body like a land mammal instead of sprawled out to the sides, bellies touching the ground.

"Their amphibious talents in the past may be the key to understanding how they flourished in, and ultimately survived, the dinosaur era," Sereno wrote in a separate article for National Geographic.
Posted by Mercury at 7:23 AM