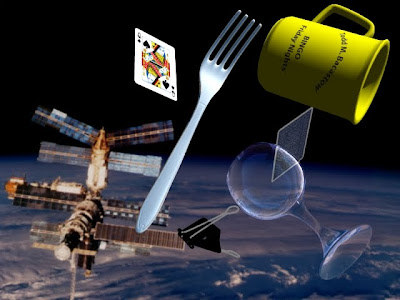 Reuters
LONDON--A growing storm of debris flying around in space is dramatically increasing the risk of orbital crashes, and steps to avoid them will add greatly to the costs of future space flight, British space experts say.

Their study into the future of space travel predicts that "close encounters" in orbit will rise by 50 percent in the next 10 years and by 250 percent by 2059 to more than 50,000 a week.

"The time to act is now, before the situation gets too difficult to control," said Hugh Lewis of the University of Southampton's school of engineering science, who led the study. "The number of objects in orbit is going to go up, and there will be impacts from that."

The U.S. military said on Tuesday it is tracking 800 satellites on a daily basis for possible collisions and expects to be able to track 500 more by the year's end.

Lewis's team looked back to the beginning of the space age, when the Soviet Union launched Sputnik 1 in 1957, to analyze how cluttered space has become since then and how much more so it is likely to be in future.

While the number of close encounters -- defined as objects passing within 5 km of each other -- is set to rise sharply, Lewis said the main effect would not necessarily be an increase in crashes, but in the number and cost of steps to avoid them.

His study estimated that satellite operators will have to make five times as many collision avoidance moves in 2059 as they will in 2019 -- each of them a strategic operation that takes time, skill and money.

Lewis was unable to put a price on avoidance steps, but said they would need to be high priorities in future space budgets.

Space junk -- or "orbital debris" -- can take many forms, ranging from used-up parts and defunct satellites, to fragments of space vehicles, particles from explosions and even flakes of paint and dust.

The amount of space debris remained relatively manageable for the first part of the space age, but two major events in recent years dramatically changed the scene, he said.

In 2007, China destroyed one of its own defunct satellites with a missile -- spewing a shower of debris. And in February, two large satellites -- a telecoms satellite owned by Iridium and a defunct Russian military satellite -- collided above the Russian Arctic and were destroyed.

"Those two events generated an enormous number of fragments, contributing about 40 percent to the total number of objects in orbit now," Lewis said in a telephone interview.

"When you look forward and see collisions are predicted, you need to anticipate that each of these...will contribute to the problem in a significant way, which is obviously very worrying."

A tiny piece of space junk about 1 cm long forced astronauts briefly to evacuate the International Space Station in March when it came too close.

"It's all about speed," said Lewis. "For things to be on orbit, typically they are moving at speeds of around 7.5 km per second -- that's relative speed of 15 km per second for things heading toward each other. So you only need something the size of a marble to completely destroy a spacecraft."

well that does it....i am canceling my trips aboard the space station. but seriously tho this is alarming considering the amount of money that goes up. i already have problems with some of these expenses we call space exploration. maybe it is time, except for communication satellites, we need to move our interests out of orbit.

I never thought of it like that, but it really is true.

What is "really true"?