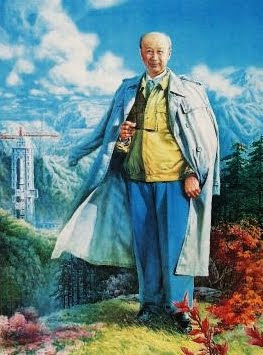 Qian Xuesen
December 11th, 1911 to October 31st, 2009
Let's see...how does the infallible logic of post World War II logic go...Qian Xuesen is a Chinese living in the United States, all Chinese are Communists, therefore Qian Xuesen is a Communist, a threat and must be deported. Sound reasoning.

Deported in 1955 on suspicion of being a Communist, the aeronautical engineer educated at Caltech became known as the father of China's space and missile programs.

The Los Angeles Times
Qian Xuesen, a former Caltech rocket scientist who helped establish the Jet Propulsion Laboratory before being deported in 1955 on suspicion of being a Communist and who became known as the father of China's space and missile programs, has died. He was 98.

Qian, also known as Tsien Hsue-shen, died Saturday in Beijing, China's state news agency reported. The cause was not given.

Honored in his homeland for his "eminent contributions to science," Qian was credited with leading China to launch intercontinental ballistic missiles, Silkworm anti-ship missiles, weather and reconnaissance satellites and to put a human in space in 2003.

The man deemed responsible for these technological feats also was labeled a spy in the 1999 Cox Report issued by Congress after an investigation into how classified information had been obtained by the Chinese.

Qian, a Chinese-born aeronautical engineer educated at Caltech and the Massachusetts Institute of Technology, was a protege of Caltech's eminent professor Theodore von Karman, who recognized him as an outstanding mathematician and "undisputed genius."

Qian's research contributed to the development of "jet-assisted takeoff" technology that the military began using in the 1940s.

He was the founding director of the Daniel and Florence Guggenheim Jet Propulsion Center at Caltech and a member of the university's so-called Suicide Squad of rocket experimenters who laid the groundwork for testing done by JPL.

But his brilliant career in the United States came to a screeching halt in 1950, when the FBI accused him of being a member of a subversive organization. Qian packed up eight crates of belongings and set off for Shanghai, saying he and his wife and two young children wanted to visit his aging parents back home. Federal agents seized the containers, which they claimed contained classified materials, and arrested him on suspicion of subversive activity.

Qian denied any Communist leanings, rejected the accusation that he was trying to spirit away secret information and initially fought deportation. He later changed course, however, and sought to return to China.

Five years after his arrest, he was shipped off in an apparent exchange for 11 American airmen captured during the Korean War.

"I do not plan to come back," Qian told reporters. "I have no reason to come back. . . . I plan to do my best to help the Chinese people build up the nation to where they can live with dignity and happiness."

Welcomed as a national hero in China, where the Communist regime had defeated the Nationalist forces, Qian became director of China's rocket research and was named to the Central Committee of the Communist Party. China, whose scientific development lagged during the Communist revolution, quickly began making strides.

Qian was born in the eastern city of Hangzhou, and in 1934 graduated from Jiaotong University in Shanghai, where he studied mechanical engineering. He won a scholarship to MIT and, after earning a master's degree in aeronautical engineering there, continued his doctoral studies at Caltech.

He taught at MIT and Caltech and, having received a security clearance, served on the Scientific Advisory Board that advised the U.S. military during and after World War II.

Qian returned to Caltech in 1949 and a year later faced the accusation by two former members of the Los Angeles Police Department's "Red Squad" that he was a card-carrying member of the Communist Party.

He admitted that while a graduate student in the 1930s he had been present at social gatherings organized by colleagues who also were accused of party membership, but he denied any political involvement.

Few can agree on the question of whether Qian was a spy. An examination of the papers Qian packed away failed to turn up any classified documents. Colleagues at Caltech firmly stood behind him, and he continued to do research there after he lost his security clearance. In fact, the university gave him its distinguished alumni award in 1979 in recognition of his pioneering work in rocket science.

Although federal officials started deportation procedures in 1950, he was prevented from leaving the country because it was decided that he knew too much about sensitive military matters that could be of use to an enemy.

For years, Qian was in a sort of limbo, being watched closely by the U.S. government and living under partial house arrest. Eventually he quit fighting his expulsion and actively worked to return to China. Some associates said that he was insulted because his loyalty to this country was questioned and that he initially wanted to clear his name.

Once he returned home in 1955, he threw himself into his research with what some saw as calculated revenge.

"It was the stupidest thing this country ever did," former Navy Secretary Dan Kimball later said, according to Aviation Week. "He was no more a Communist than I was, and we forced him to go."

Qian survived the Cultural Revolution of the 1960s, when many Chinese intellectuals lost their positions, probably because his scientific research and development for military purposes was considered too vital to suspend.

He is said to have supported the government's crushing of the rebellion in Tiananmen Square in 1989. And he never returned to the United States.

Wikipedia entry
Posted by Mercury at 5:05 AM