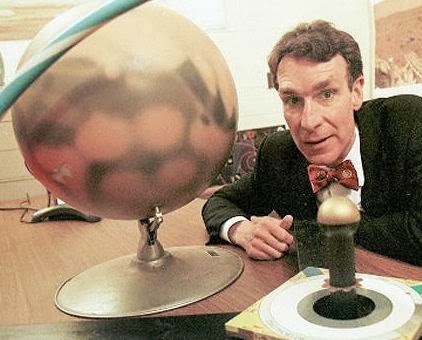 Seems like a waste of time...each side is entrenched.

Bill Nye, science education advocate and TV personality, will visit Kentucky in February to debate Ken Ham, the founder of the Creation Museum. The event will be titled, 'Is Creation A Viable Model of Origins?'

Bill Nye "The Science Guy" is set to visit Kentucky to debate evolution and biblical creation with the founder of the Creation Museum.

Ken Ham wrote on his Facebook page Thursday that he will square off Feb. 4 with Nye, the former host of a popular science TV show for youths.

The event is likely to attract plenty of attention in scientific and faith circles, as Nye is a high-profile advocate of science education and Ham is a respected leader among Christians who believe the Bible's origin story is a factual account of the Earth's beginnings.

Ham had been hoping to attract the star of TV's "Bill Nye The Science Guy" to the northern Kentucky museum after Nye said in an online video last year that teaching creationism was bad for children. The video was viewed nearly 6 million times on YouTube.

"Having the opportunity to hold a cordial but spirited debate with such a well-known personality who is admired by so many young people will help bring the creation-evolution issue to the attention of many more people, including youngsters," Ham said in a release Thursday.

The Creation Museum has been lauded by supporters and prodded by scientists for exhibits that assert the Earth was created in a few days about 6,000 years ago. It also has displays with dinosaurs and humans living alongside each other, in contradiction to scientific findings that the two species were separated by more than 60 million years.

Nye said in an Associated Press interview in September that steering children away from evolution and teaching creationism would hurt scientific advances. Science has demonstrated that the Earth is billions of years old, and "if that conflicts with your beliefs, I strongly feel you should question your beliefs," he told the AP.

Nye, who is executive director of the Planetary Society, said in that interview that he would be willing to travel to Kentucky and debate Ham if the museum paid his travel expenses.

An email message sent to Nye's assistant was not returned Thursday. Nye agreed to participate in the debate early last month, said Mark Looy, vice president of outreach for Answers in Genesis, the ministry that operates the Creation Museum.

Ham said some "mocking, strident evolutionists" have invited him and other Creation Museum staff to debates in the past, but they have declined. Ham wanted to engage with Nye because, "as a serious advocate for his beliefs, Nye's opinions carry weight in society," Ham said in the release.

The event will be titled "Is Creation A Viable Model of Origins?" Tickets to the evening event at the museum's Legacy Hall will be $25.
Posted by Mercury at 4:07 PM