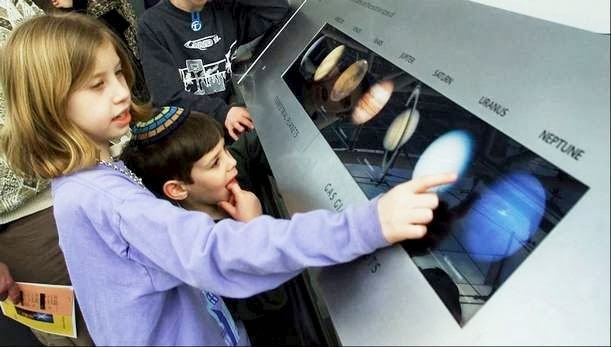 Tova Hagler, 10, left, reads through the names of the planets with her brother, Yaakov, 5, as they walk through the Scales of the Universe exhibit at the Rose Center for Earth and Space at the American Museum of Natural History in New York. Pluto was considered a planet from 1930 to 2006, but is now classified as a trans-Neptunian object.

"The IAU confirms three requirements for planet status: the object must orbit around the sun directly; it has to be big enough so its gravity squeezes into a ball; and it has to have cleared out most other objects in its orbit."

Maybe those criteria need to be changed.


"New rules mean Pluto is no longer a planet"

New rules are announced all the time for things like professional sports, driving and politics. Astronomy is no different. In fact, new rules are the reason why Pluto, which had planet status from 1930 to 2006, was demoted to the lesser level of trans-Neptunian object.

"When scientists sharpened the definition of a planet, they realized that Pluto has a lot more in common with the 'Trans-Neptunian objects' than the regular planets," said Dr. Geza Gyuk, director of astronomy at Chicago's Adler Planetarium.

In the early 1900s, a miscalculation led scientists to believe there was something beyond the eight planets in our solar system, so they scoured the skies to locate and identify this mysterious planet. Dubbed Planet X, this space object was presumably the cause of discrepancies in the orbits of Neptune and Uranus, causing them to tug or weave outside of a predictable orbit.

Percival Lowell, the benefactor for the Lowell Observatory at the University of Arizona in Flagstaff, hoped the discovery of Planet X would resolve the unexplained variations.

New on the job in 1930, Clyde W. Tombaugh, a 23-year-old astronomer at the Lowell Observatory, examined photos taken over time and quickly realized that beyond Neptune, an oversized space object existed at the outer reaches of our universe. He named it Pluto.

"When they found Pluto, it was natural to consider it a planet," Gyuk explained. "As it turns out, the measurements of Neptune's orbit were incorrect. There weren't any unexplained tugs after all, and Pluto turned out to be vastly less massive than originally thought."

This and other data led scientists to develop new rules for defining planets.

"In the 1990s and early 2000s, astronomers started discovering a whole bunch of other objects out there that were a lot like Pluto — strange orbits, about the same size, etc.," Gyuk said. "But all of these couldn't be planets, could they?"

The International Astronomical Union, or IAU, is the authority that names and identifies objects in the solar system. The IAU confirms three requirements for planet status: the object must orbit around the sun directly; it has to be big enough so its gravity squeezes into a ball; and it has to have cleared out most other objects in its orbit.

"The eight major planets fall into this definition," Gyuk said. "The asteroids don't, even if some are large enough to the spherical. Pluto and its gang share similar orbits so they aren't planets. Instead, the IAU has classified them as dwarf planets."
Posted by Mercury at 2:35 PM

Don't say "Sayonara" to planet Pluto just yet, as those so-called "rules" never had consensus among the astronomy community. Here is my response to the article:

Unfortunately, Ms. Babowice is telling only part of the story here. First, our solar system does NOT have only eight planets. Second and most importantly, the so-called "new rules" she refers to actually represent only one viewpoint in the world of astronomy and are contested by a large number of astronomers who continue to reject them more than seven years later.

The overwhelming majority of the Trans-Neptunian Objects Gyuk mentions are tiny, shapeless iceballs. Pluto actually has much more in common with the larger planets than with these iceballs. For one, Pluto is much bigger. It is estimated to be 70 percent rock while these other objects are mostly ice. Pluto has the same complex structure as the larger terrestrial planets. It has geology and weather--including an atmosphere--and is differentiated into core, mantle, and crust, just like Earth is. The only difference between Pluto and the larger terrestrial planets is that Pluto is smaller.

And Pluto has an odd orbit...ecliptic.

Many astronomers reject the "rule" that an object has to clear out its orbit to be considered a planet. These astronomers, known as geophysicists, define a planet more broadly, as any non-self-luminous spheroidal body orbiting a star or free-floating in space. Pluto is well beyond the threshold for being rounded by its own gravity--unlike the majority of those Trans-Neptunian Objects. A few TNOs also are large enough to be rounded by their own gravity, such as Eris, and they too are small planets. However, they do not share their orbits with Pluto. The Kuiper Belt is a very big place. Additionally, no object larger than Pluto has ever been found there. Eris, initially thought to be larger than Pluto, was determined in 2010 to be marginally smaller though 25 percent more massive. The latter means it is even more rocky than Pluto and therefore more planet-like.

Also, no planet in the solar system fully clears its orbit, as all planets have asteroids in their orbital paths. Neptune does not clear its orbit of Pluto.

An asteroid cannot be spherical. If an object is large enough to be spherical, it is a small planet, as it is structurally and compositionally much more complex than any asteroid, which is essentially a rubble pile. This is why Ceres is really a small planet. The Dawn mission has shown that even Vesta, which is not completely spherical, is more planet than asteroid, to the point that scientists on the mission are referring to Vesta (which is much smaller than Pluto) as "the smallest terrestrial planet."

Thank you for posting the rest of my comment. For some reason, the site would not let me post comments beyond a certain length.