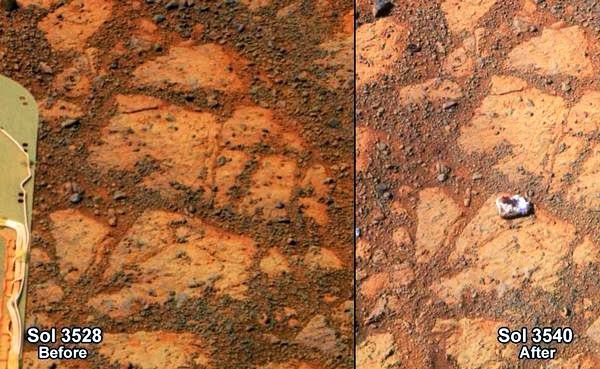 The saga of the jelly doughnut-shaped rock on Mars has taken a strange turn -- to a federal court.

On Monday, Rhawn Joseph, who describes himself as a neuroscientist and astrobiologist, filed court papers demanding that NASA do more to investigate the mysterious rock.

"NASA's rover team inexplicably failed to perform the basic demands of science, which is re-search, look again," he wrote in a petition for a writ of mandamus filed with the U.S. District Court in San Francisco. "The refusal to release high resolution photos is inexplicable, recklessly negligent and bizarre."

He asks the judge to order NASA to closely photograph the rock from several angles, thoroughly examine it, and share that information with the public.

The rock is mysterious for a few reasons. It has a depressed, bright red center and a white exterior (hence the comparisons to a jelly doughnut). More important, scientists working with the Opportunity rover have acknowledged that its chemical composition is unlike anything else they have seen on Mars -- lots of sulfur, manganese, and magnesium.

But most puzzling is that it just showed up, seemingly out of nowhere. The rock appeared in an image taken 12 days after one made at the same location that did not show such a rock.

Steven Squyres, the principal investigator for the Mars Exploration Rover Mission, said he doesn't think the rock's appearance is especially exotic. He and his team have theorized that it may have been dislodged when Opportunity made what he called a pirouette just up the hill from where the rock showed up.

"It drove in such a fashion that it would drag the right front wheel kind of chattering across the ground, and we think that in that process, it kind of tiddlywinked the rock out of the ground and moved it into a location where we can see it," he said at a news briefing last week.

But Rahwn Joseph has his own theories. In the court papers, he suggests that the rock may not be a rock at all, but rather a fungus-like organism. If so, that would mean Opportunity has discovered life on Mars.

In a Jan. 17 post on the website Cosmology: Journal for the Advancement of Theoretical Science, Joseph makes the case that the formation is "a fully grown bowl-shaped organism resembling Apothecia," which are "a mixture of fungus and cyanobacteria."

Joseph is the author of several books, including "Biological UFOs: Evidence for extraterrestrial extremophiles and life in space" (2012) and "Astrobiology: The Origin of Life and the Death of Darwinism" (2001).

NASA officials have not yet responded to a request for comment about the court filing, but at the news conference last week, Squyres said the Opportunity team is continuing to investigate the rock.

"This is an ongoing story of discovery," he said.
Posted by Mercury at 2:28 PM