Laura Dekker and new film of her voyage..."Maidentrip" 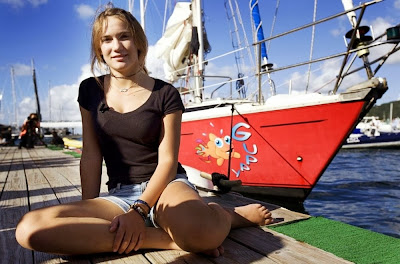 A film follows the journey of Laura Dekker as she attempts to circumnavigate the globe.

In 2010, 14-year-old Laura Dekker took to the seas in her sailboat, Guppy, on a quest to become the youngest person to sail around the world alone. Maidentrip, a forthcoming feature-length documentary, follows Dekker on her voyage, told largely through footage that Dekker shot while at sea. Far from her family and without a support team, Dekker goes where the wind takes her. In an exclusive excerpt of the film above, Dekker sails from French Polynesia to Australia.

In 2009, when Dekker first announced plans to sail the world, Dutch authorities prevented her from setting sail for a year. “Of course there are people who say you’re crazy, but it’s a dream. A great, great dream. I want to sail, I want to go around the world. I want to see all the places and not always the stupid same thing,” says Dekker at the start of the film. “I lived my first five years at sea and ever since, all I’ve wanted is to return to that life.” In January 2012, after 17 months at sea, Laura successfully completed her voyage.

In an interview with The Atlantic’s Video channel, filmmaker Jillian Schlesinger discusses the film:

The Atlantic: Why do you think Dekker’s voyage has been such a polarizing subject? After she finished sailing, and with Maidentrip on the festival circuit, has the conversation changed?

Jillian Schlesinger: I think anytime a young person is doing something so far outside the realm of what is considered normal and conventionally accepted, it ruffles a lot of feathers. Some people applaud and stand up for it, others call it insane and irresponsible. Everyone brings their own experiences and values to considering it, however I noticed the more I read the more it seemed Laura's own voice was missing from the conversation about her voyage. Consequently, many opinions may have been formed without examining Laura's unique circumstances and worldview. The film allows people into an extraordinarily remote and unique world. It's hard to imagine being more at home and secure at sea than on land, but that is Laura's reality. I think having Laura's voice and perspective represented in the broader conversation about her story, free from the hyper-sensationalized media filter, has changed the conversation in many ways, especially challenging a lot of misguided, gender-biased language used to talk about her story early on. And now that the trip is in the past and she succeeded, that certainly changes things dramatically.

How did you come to meet Dekker and make the film?

I read about Laura in the New York Times in 2009 and immediately wanted to make the film. I spent some time thinking about the concept and approach and then reached out to Laura with a detailed illustrated proposal and a long personal letter about my experience and intentions. Laura connected to something in my proposal, responded, and we began discussing the details of how we would make this thing happen.

What were the biggest challenges in making Maidentrip a reality?

This was a very challenging first film to make, but I'm glad I didn't go into it with that mindset. Most of the creative and logistical challenges were really exciting, like the challenge making a film about something unfolding as it's being documented and happening largely outside of your presence and outside of your control. It required a lot of trust—trust in Laura, in other collaborators, in the universe. It's crazy now to look back on how it all came together, but at the time it was all unfolding, it seemed so hard to imagine that it would eventually become something that people could see and react to.

What was your relationship with Dekker like during filming? How involved was she from a creative standpoint?

Laura's creative input and our collaborative working relationship were essential to every stage of the filmmaking process . I would say our relationship has been much more of a deep friendship and creative partnership than what I imagine to be a typical filmmaker-subject bond, if there even is one. When I would go to meet her in various ports along her route, the filming was always a secondary consideration to our many adventures. While we often had a camera in tow, the spirit of our collaboration was much more akin to two friends working on a project together, rather than me, the filmmaker, making a film about Laura, the subject.

What is Dekker up to today?

Laura is living on her own in New Zealand, doing a bit of traveling and speaking about her experiences. She recently got her driver's license. She's also busy plotting her next adventure.

Maidentrip is a film directed by Jillian Schlesinger and produced by Schlesinger and Emily McAllister, with support from Louis Venezia. The design and animation were created by Moth Collective.

The auspicious voyage has begun--Laura Dekker has set sail


Abby Sunderland and a parent's perspective
Posted by Mercury at 3:23 PM