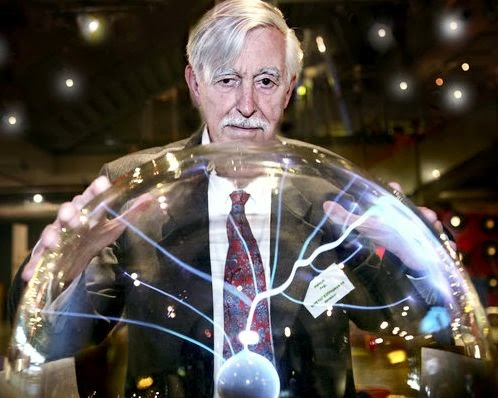 Halton C. Arp, a prodigal son of American astronomy whose dogged insistence that astronomers had misread the distances to quasars cast doubt on the Big Bang theory of the universe and led to his exile from his peers and the telescopes he loved, died on Dec. 28 in Munich. He was 86.

The cause was pneumonia, said his daughter Kristana Arp, who said he also had Parkinson’s disease.

As a staff astronomer for 29 years at Hale Observatories, which included the Mount Wilson and Palomar Mountain observatories in Southern California, Dr. Arp was part of their most romantic era, when astronomers were peeling back the sky and making discovery after discovery that laid the foundation for the modern understanding of the expansion of the universe.

But Dr. Arp, an artist’s son with a swashbuckling air, was no friend of orthodoxy. A skilled observer with regular access to a 200-inch telescope on Palomar Mountain, he sought out unusual galaxies and collected them in “The Atlas of Peculiar Galaxies” (1966), showing them interacting and merging with loops, swirls and streamers that showed the diversity and beauty of nature.

But these galaxies also revealed something puzzling and controversial. In the expanding universe, as discovered by Edwin Hubble in 1929, everything is moving away from us. The farther away it is, the faster it is going, as revealed by its redshift, a stretching of light waves — like the changing tone of an ambulance siren as it goes past — known as a Doppler shift.

Dr. Arp found that galaxies with radically different redshifts, and thus at vastly different distances from us, often appeared connected by filaments and bridges of gas. This suggested, he said, that redshift was not always an indication of distance but could be caused by other, unknown physics.

The biggest redshifts belonged to quasars — brilliant, pointlike objects that are presumably at the edge of the universe. Dr. Arp found, however, that they were often suspiciously close in the sky to relatively nearby spiral galaxies. This suggested to him that quasars were not so far away after all, and that they might have shot out of the nearby galaxies.

If he was right, the whole picture of cosmic evolution given by the Big Bang — of a universe that began in a blaze of fire and gas 14 billion years ago and slowly condensed into stars, galaxies and creatures over the eons — would have to go out the window.

A vast majority of astronomers dismissed Dr. Arp’s results as coincidences or optical illusions. But his data appealed to a small, articulate band of astronomers who supported a rival theory of the universe called Steady State and had criticized the Big Bang over the decades. Among them were Fred Hoyle, of Cambridge University, who had invented the theory, and Geoffrey Burbidge, a witty and acerbic astrophysicist at the University of California, San Diego. Dr. Arp survived both of them.

“When he died, he took a whole cosmology with him,” said Barry F. Madore, a senior research associate at the Carnegie Observatories in Pasadena, Calif.

Halton Christian Arp was born on March 21, 1927, in New York City, the only son of August and Anita Arp. His father was an artist and his mother ran institutions for children and adolescents. Halton grew up in Greenwich Village and various art colonies and did not go to school until fifth grade. After bouncing around public schools in New York, he was sent to Tabor Academy, on Buzzards Bay in Massachusetts, a prep school for the United States Naval Academy.

After a year in the Navy, he attended Harvard, where he majored in astronomy. He graduated in 1949 and went on to obtain a Ph.D. in 1953 at the California Institute of Technology, which had started an astronomy graduate program to prepare for the advent of the 200-inch telescope.

At Harvard, he became one of the best fencers in the United States, ultimately competing in world championship matches in Paris in 1965. Cutting a dashing figure, he would adopt a fencer’s posture when giving talks. “He would strut across the stage and then strut back, as if he were dueling,” Dr. Madore said.

Dr. Arp became a staff astronomer at the Hale Observatories after stints as a postdoctoral fellow at the Carnegie Institution for Science and Indiana University. His breakthrough occurred, as he recalled, on a rainy night at Palomar in 1966, when he decided to investigate a chance remark by a colleague that a lot of his peculiar galaxies had radio sources near them in the sky. Looking them up in the Palomar library, he realized that many of those radio sources were quasars that could have been shot out of a nearby galaxy, an idea first explored by the Armenian astronomer Victor Ambartsumian a decade earlier.

“It is with reluctance that I come to the conclusion that the redshifts of some extragalactic objects are not due entirely to velocity causes,” Dr. Arp wrote in a paper a year later.

He combed the sky for more evidence that redshifts were not ironclad indicators of cosmic distance, knowing that he was striking at the heart of modern cosmology. He turned out to be an expert at finding quasars in suspicious places, tucked under the arm of a galaxy or at the end of a tendril of gas.

One of the most impressive was a quasarlike object known as Markarian 205, which had a redshift corresponding to a distance of about a billion light years but appeared to be in front of a galaxy only 70 million light years away.

The redshift controversy came to a boil in 1972, when Dr. Arp engaged in a debate, arranged by the American Association for the Advancement of Science, with John N. Bahcall, a young physicist at the Institute for Advanced Study. Timothy Ferris described the event in his book “The Red Limit” (1977): “When the debate was over, it was difficult not to be impressed with Arp’s sincerity and his love for the mysterious galaxies he studied, but it was also difficult to feel that his case had suffered anything short of demolition.”

As Dr. Arp’s colleagues lost patience with his quest, he was no longer invited to speak at major conferences, and his observing time on the mighty 200-inch telescope began to dry up. Warned in the early 1980s that his research program was unproductive, he refused to change course. Finally, he refused to submit a proposal at all on the grounds that everyone knew what he was doing. He got no time at all.

Dr. Arp took early retirement and joined the Max Planck Institute for Astrophysics near Munich, where he continued to promote his theories. He told his own side of the redshift story in a 1989 book, “Quasars, Redshifts and Controversies.”

ATLAS OF PECULIAR GALAXIES
Posted by Mercury at 3:48 PM