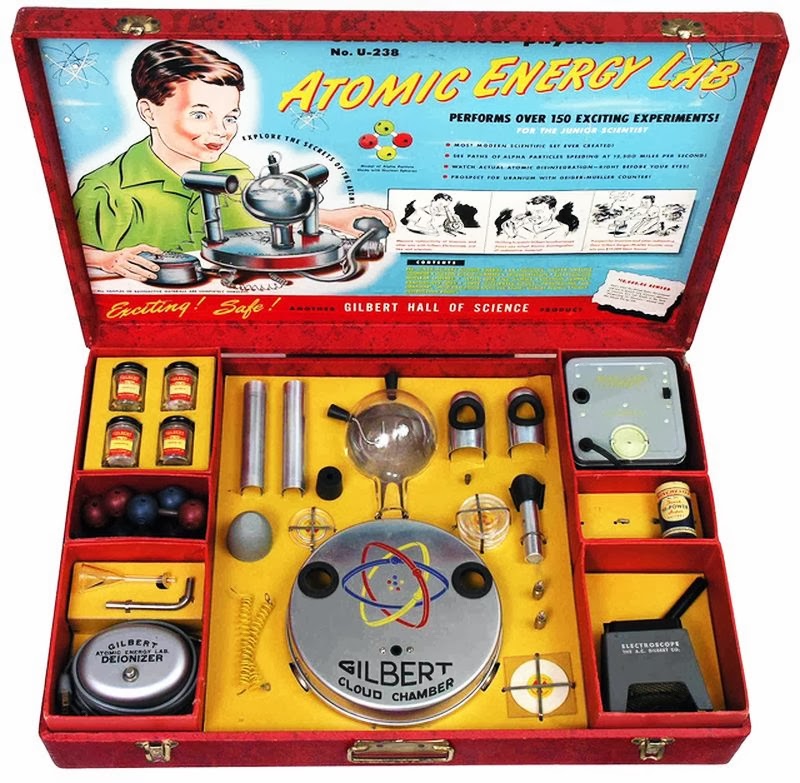 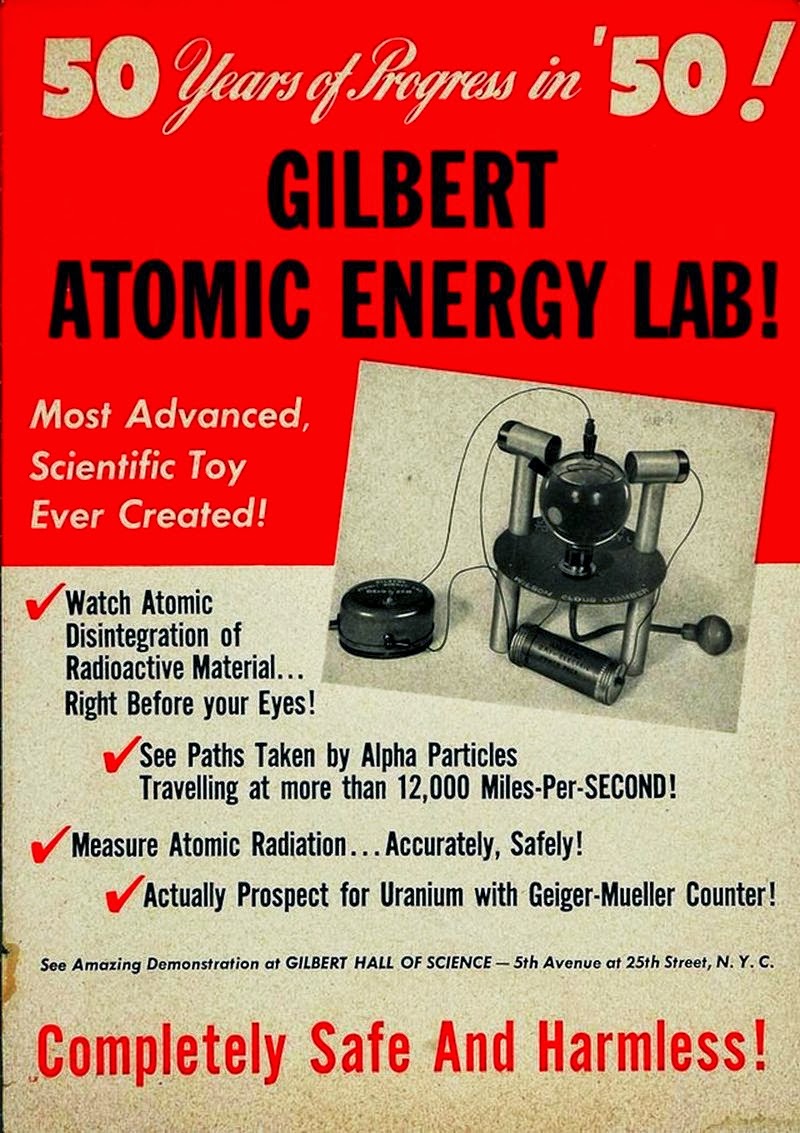 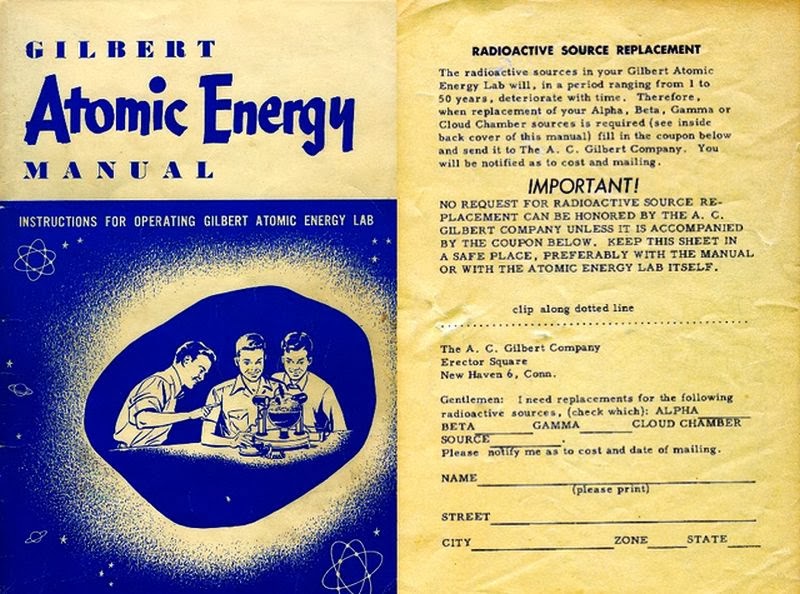 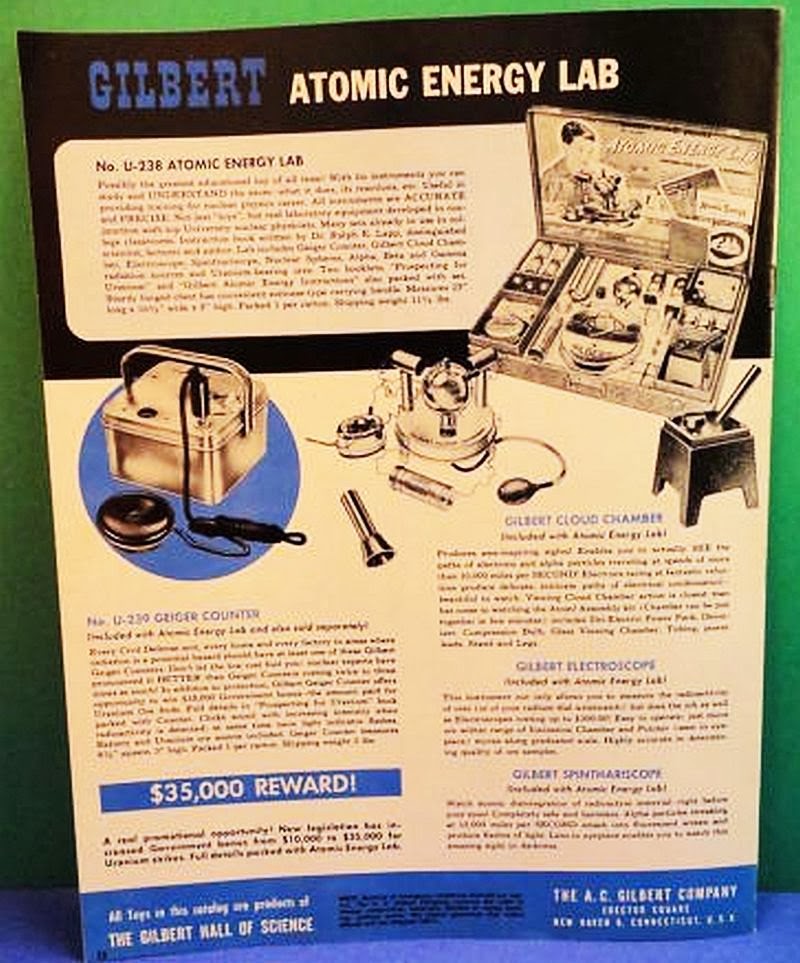 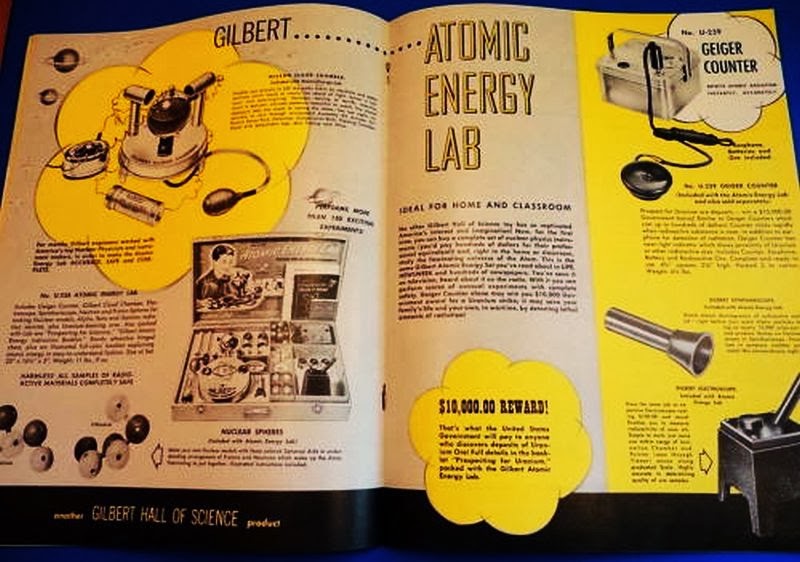 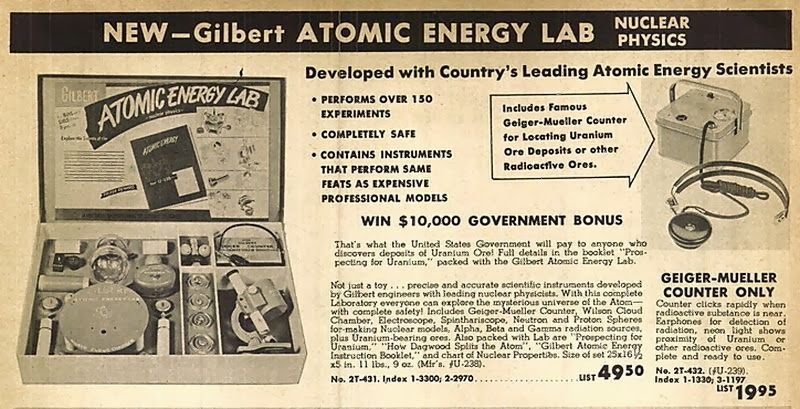 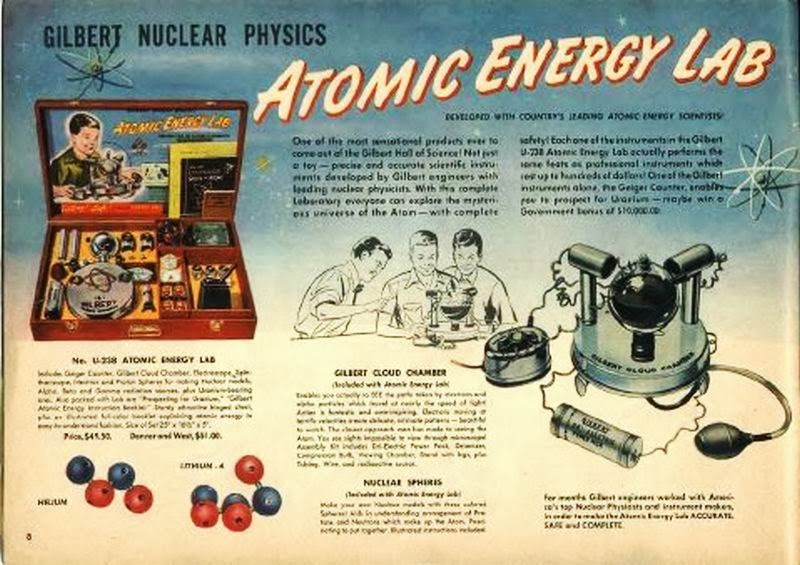 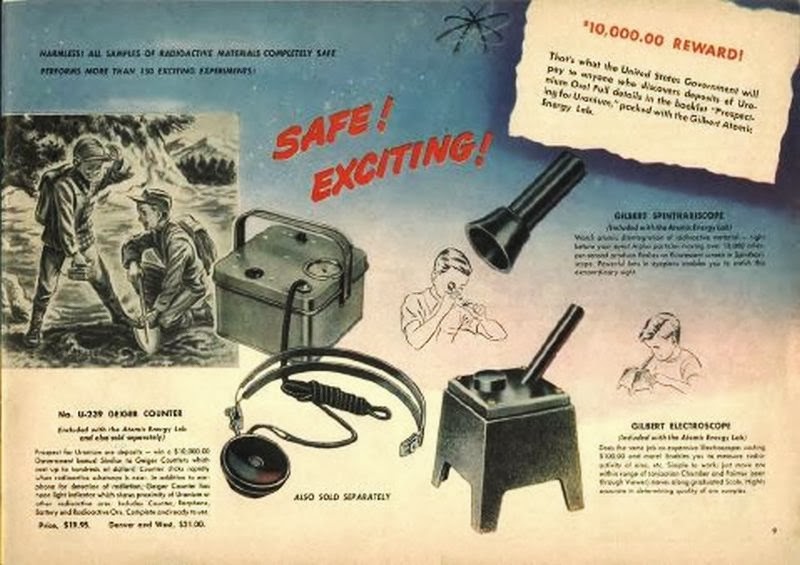 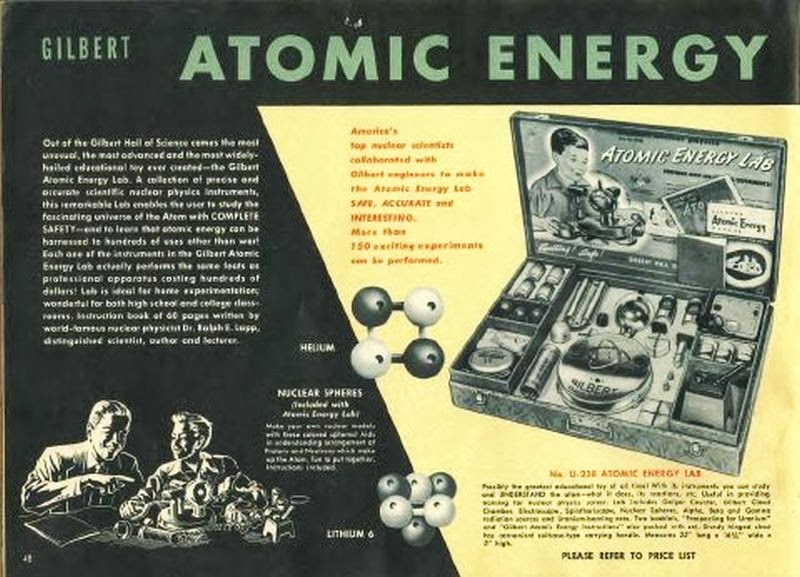 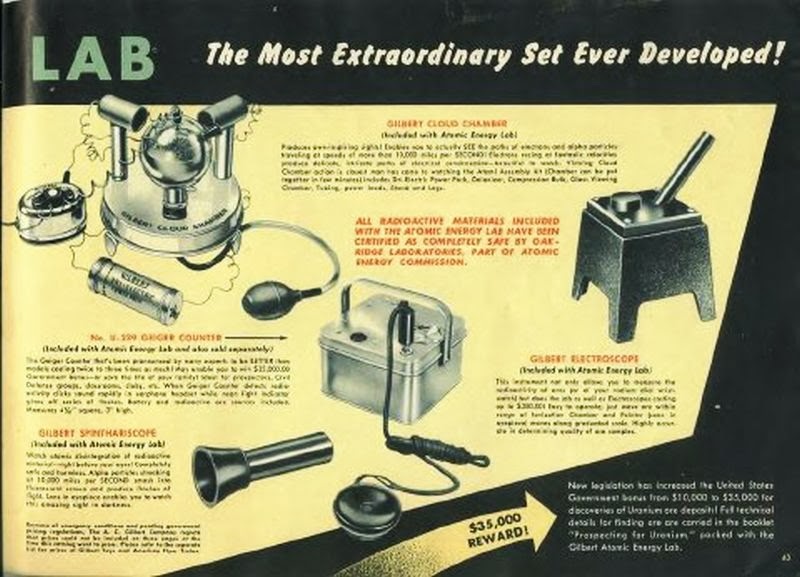 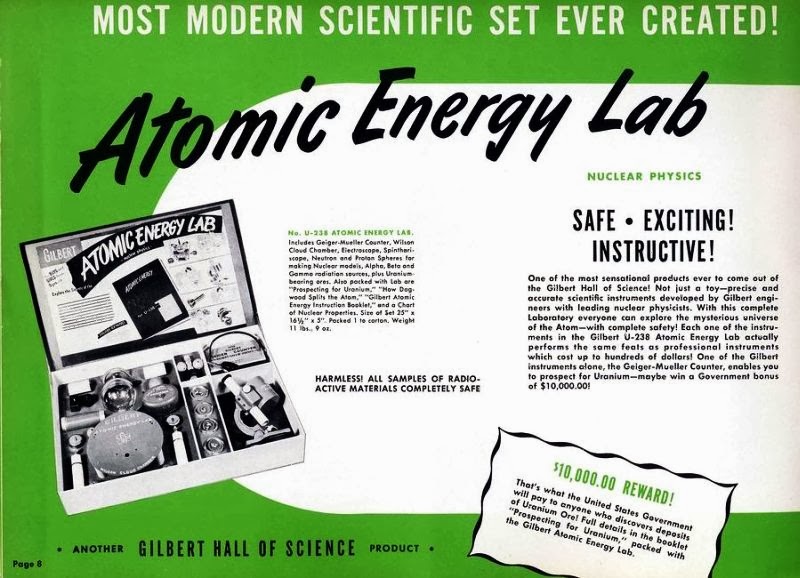 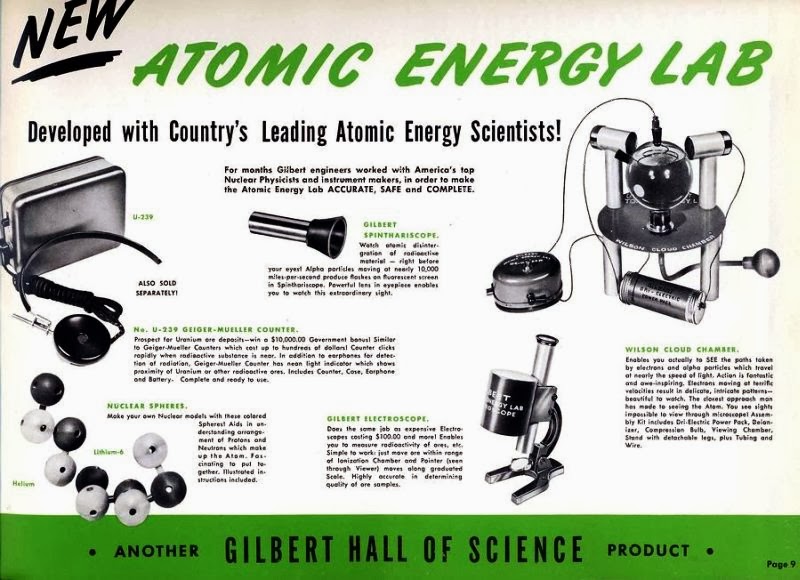 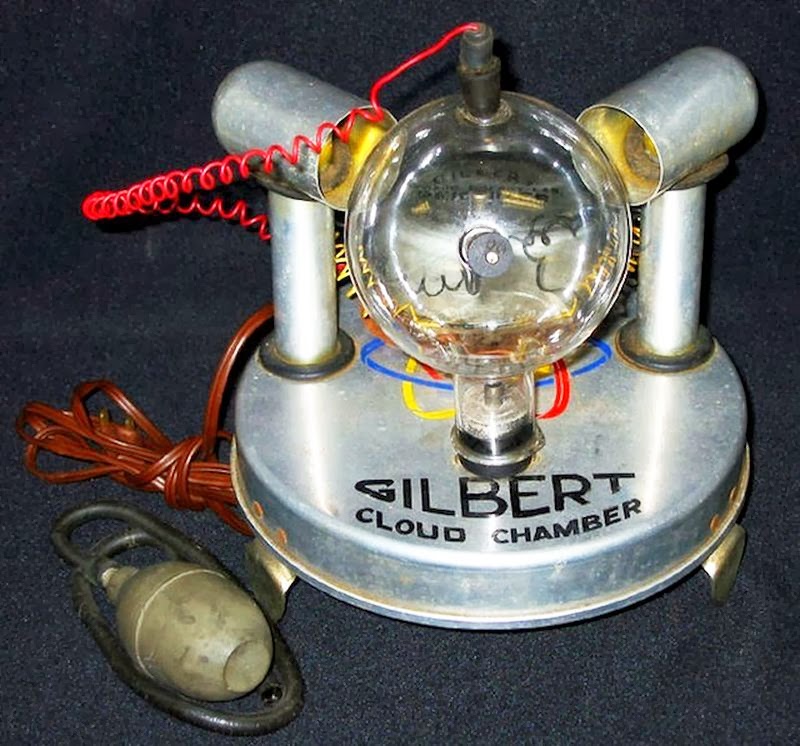 An excerpt from A. C. Gilbert's autobiography:
The Man Who Lives In Paradise...

The most spectacular of our new educational toys was the Gilbert Atomic Energy Laboratory. This was a top job, the result of much experimentation and hard work. We were unofficially encouraged by the government, who thought that our set would aid in public understanding of atomic energy and stress its constructive side. We had the great help of some of the country's best nuclear physicists and worked closely with M.I.T. in it's development.

There was nothing phony about our Atomic Energy laboratory. It was genuine, and it was also safe. We used radioactive materials in the set, but none that might conceivably prove dangerous. There was a Geiger-Mueller Counter. It was accurate; a carefully designed and manufactured instrument that could actually be used in prospecting for radioactive materials. The Atomic Energy lab also contained a cloud chamber in which the paths of alpha particles traveling at 12,000 miles a second could be seen; a spinthariscope showing the results of radioactive disintegration on a fluorescent screen; an electroscope that measured the radioactivity of different substances.

It caused quite a sensation at the Toy Fair and received a great deal of publicity. But there were difficulties. It had to be priced very high--$50.00--and even at that price we managed to lose a little money on every one sold. The Atomic Energy Lab was also the most thoroughly scientific toy we had ever produced, and only boys with a great deal of education could understand it. It was not suitable for the same age groups as our simpler chemistry and microscope sets, for instance, and you could not manufacture such a thing as a beginner's atomic energy lab. So we had to drop this wonderful new addition to our line of educational toys--and toy has never seemed to me to be the right word to apply to such things. We adapted some of its features so that they could be added to our largest chemistry set--using the spinthariscope, some radioactive ore, and the atomic energy manual. 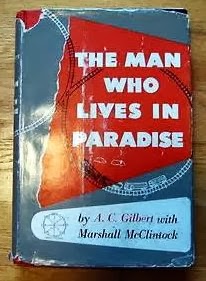 The Man Who Lives In Paradise