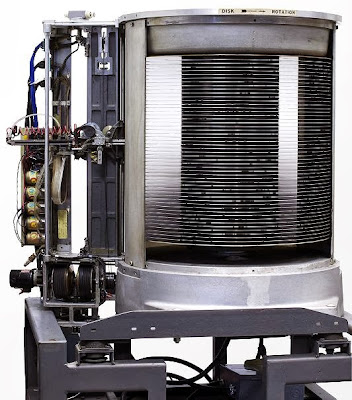 IBM unleashed the world’s first computer hard disk drive in 1956. It was bigger than a refrigerator. It weighed more than a ton. And it looked kinda like one of those massive cylindrical air conditioning units that used to sit outside your grade school cafeteria.

This seminal hard drive was part of a larger machine known as the IBM 305 RAMAC, short for “Random Access Method of Accounting and Control,” and in the classic promotional video below, you can see the thing in action during its glory days. Better yet, if you ever happen to be in Mountain View, California, you can see one in the flesh. In 2002, two engineers named Dave Bennet and Joe Feng helped restore an old RAMAC at the Computer History Museum in Mountain View, where it’s now on display. And yes, the thing still works.

As we’re told in IBM’s 1956 film — which chronicles the five years of research and development that culminated in the RAMAC — Big Blue built the system “to keep business accounts up to date and make them available, not monthly or even daily, but immediately.” It was meant to rescue companies from a veritable blizzard of paper records, so adorably demonstrated in the film by a toy penguin trapped in a faux snow storm.

Before RAMAC, as the film explains, most businesses kept track of inventory, payroll, budgets, and other bits of business info on good old fashioned paper stuffed into filing cabinets. Or if they were lucky, they had a massive computer that could store data on spools of magnetic tape. But tape wasn’t the easiest to deal with. You couldn’t get to one piece of data on a tape without spooling past all the data that came before it.

Then RAMAC gave the world what’s called magnetic disk storage, which let you retrieve any piece of data without delay. The system’s hard drive included 50 vertically stacked disks covered in magnetic paint, and as they spun around — at speeds of 1,200 rpm — a mechanical arm could store and retrieve data from the disks. The device stored data by changing the magnetic orientation of a particular spot on a disk, and then retrieve it at any time by reading the orientation.

“That was the giant, conceptual leap behind this,” Dag Spicer, the curator of the Computer History Museum, tells WIRED. “[RAMAC] knows where the information is and it just goes and grabs it immediately.” The arm could fetch information at a 100,000 bits per second clip.

This is the same basic technology that now juggles data on everything from your laptop to a vast majority of the computer servers that underpin the massive web services run by the likes of Google, Amazon, and Apple — though this tech is slowing giving way to faster “flash memory” devices.

The RAMAC hard drive could hold roughly 5 MB of data, the equivalent of an MP3 music file. That may seem puny, but in the 50s, it was enormous.

RAMAC was also physically big, filling an entire room. During Big Blue’s promotional film, you get a good sense of its massive scale, as all the people who helped build the thing — accountants and artists, chemists and clerks, engineers and electricians, stenographers and salesmen — walk past the hard drive outside IBM’s sun-drenched facilities in San Jose, California, some 50 miles south of San Francisco.

Why is his massive computer sitting outside in the heat, and, later in the film, next to a glistening pool of water? Marketing! IBM would also take the thing on a RAMACADE marketing tour, just like “other stars from California.”

Eventually, the basic technology pioneered by RAMAC led not only to smaller hard drives, but also the relational database — software that revolutionized information storage and retrieval in the ’80s. “People [are] now totally dependent on this kind of storage to do their business, to do their communicating, to keep in touch,” said Albert Hoagland, the founder of the Magnetic Disk Heritage Center, in 2011. “I can’t imagine a bigger legacy you could leave than that.”

Yes, RAMAC was big and clunky. But it worked.

Hoagland was the man who began the restoration of the RAMAC that’s now at the Computer History Museum, one of roughly 1,000 systems built by IBM over the years. He went to work on the device alongside some students at Santa Clara University, and eventually, Bennet and Feng were able to actually retrieve information that had been stored on the thing almost 40 years before.

They found data from what seemed to be a Canadian insurance company, along with some stuff about some contemporary car manufacturers and the 1963 World Series. All of it was readable without error. “The RAMAC data is thermodynamically stable for longer than the expected lifetime of the universe,” says Feng. He acknowledges, however, that there are other ways for the thing to fail.

Hard drives have never been perfect.
Posted by Mercury at 2:48 PM