A telescope for Christmas?...read this 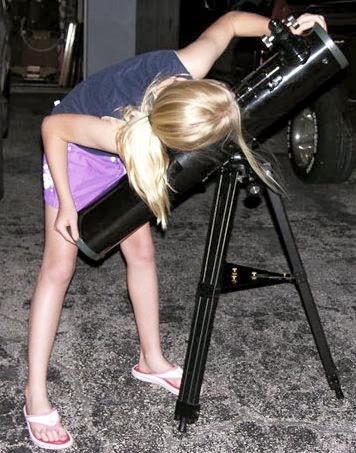 
A person's first telescope can tilt one's eyes to the sky in a somewhat permanent fashion, if anecdotal evidence has any standing. Over the years many other amateur astronomers have said their interest in the sky can be traced back to receiving their first telescope over the holidays.

With Christmas just behind us, perhaps you now fall into this category. If this were the case, you are now at a very important crossroad, one I can help you navigate.

While it is true that many have become "hooked" for life by viewing the wonders of the sky through their first telescope, it is also true that many others have had their initial enthusiasm for astronomy severely dampened by their first telescope — especially if the pleasure-to-frustration ratio becomes too low. So now is the appropriate time to talk about how best to take advantage of your new instrument.

Learn your way around

First, if you have not already done so, I would also invest in a couple of good books on the stars and constellations. As the late George Lovi (1939-1993) a long-time columnist of Sky & Telescope magazine once wrote: "First spend some time learning the sky with your own personal optics — the set nature mounted in your head."

If you haven't yet opened the box that contains your telescope, good! From over 45 years of both personal observing and teaching many others, I believe you should not hastily rush outside with a telescope before knowing what's in the sky or what to look at. It's not unlike buying a catamaran if you've never sailed before.

When you finally start setting up your telescope, take whatever time is needed to learn its use and operation. Be sure that you have assembled everything with great care. In the beginning, practice how to aim and focus your new instrument on daytime terrestrial objects. Not only are they bright and easy to see, but unlike night sky objects, they will not drift out of your field of view due to Earth's rotation.

Some telescopes come with a manual that perhaps promises "spectacular views" of the moon or the rings of Saturn at magnifications of, say, 500-power or more. Unfortunately, too many uninitiated amateurs are "power happy" (I call this malady "poweritis"). But high power only dilutes the brightness of an image, as well as aggravates any unsteadiness of detail. And if you have an unsteady telescope mount, high power will not only magnify the image of the object you’re trying to see, but also magnify every shake or wobble.

So, always remember as a general rule of thumb the maximum amount of magnification for any telescope is 50-power per inch of aperture. If you have, for example, a 6-inch reflector, 300-power is as high as you should ever attempt to go; the maximum for a 3-inch refractor should be 150-power.

"But wait a minute," you may protest, "my telescope comes with a special Barlow lens, that the manufacturer promises will double or even triple the magnification of my eyepiece."

True enough. In fact, that aforementioned 500-power is likely achieved by pushing the scope's highest power eyepiece with that very same Barlow lens, which ultimately will result in a dim, impossibly fuzzy image. If you're a beginner, you need to understand that using a Barlow lens is similar to enlarging a photograph. The negative — like a telescope's image — contains only so much detail, which can be blown up only so far before all you can see is fuzz. So, if you have purchased a 3-inch telescope — even if it is blessed with perfect optics — the claim of 500-power is more than three times the limit of the most practical magnification that it can provide.

Truth be told, you’ll probably be surprised to discover that your most pleasing views with your new instrument will come at much lower powers. Low power, in fact, makes a telescope much more convenient to handle, and if your telescope mount or tripod is a bit shaky, as least lower powers will not magnify "the shakes" as much.  I personally recommend one-half of the maximum magnification, so if you have a 6-inch telescope, try going no higher than 150-power; for a 3-inch scope, 75-power.

One other thing that should be mentioned is in regard to solar viewing. Some department store telescopes, especially imported varieties, may include a dark glass designed to screw into the eyepiece of the scope. Supposedly, this filter is to be used to view the sun. If your telescope came with such a device, discard it immediately.

Unfortunately, by directing your telescope toward the sun the light and heat from our host star are intensified tremendously when they reach your eyepiece. As such, there is an ongoing threat that the dark glass will be heated to a point where it will suddenly crack. Should your eye be looking through the eyepiece if that were to happen, you likely would not have enough time to turn away. The end result can be partial or total blindness. Never, ever, look directly at the sun at any time with your telescope. If you do wish to observe the sun, the only way to go is to project its enlarged image onto a white card or screen.

So what is there to see? This week's sky offers several fine sights. Probably the most rewarding object is the moon. It is bright, easy to locate and filled with fascinating detail, although this week it will be difficult to see since it will pass new phase on New Year's Day.

Try for it on Jan. 2 about a half-hour after sunset when it will appear as a razor-thin sliver of light low in the southwest sky. Below and to the right of the moon that evening will be the brilliant planet Venus, now in its finally days as an evening object. Venus alone can steal the show, and in recent nights it has appeared as a beautiful crescent even in steadily held binoculars. [10 Weirdest Facts About Venus]

On the opposite side of the sky is the planet Jupiter, which will pass opposition (and hence shines in the sky all night) on Jan. 4.  Its four bright moons provide a constantly changing target even in binoculars.  And if you desire to train your new scope on the ringed wonder, Saturn, it is well placed in the southeast sky at dawn.

The brilliant starry scene in the eastern sky during the early evening hours contains innumerable treats such as the Pleiades and Hyades Star Clusters, as well as the Great Nebula of Orion. Indeed, there's an entire universe of stars — double, multiple and highly beautiful — as well as other nebulae and galaxies for you to explore. The choices are virtually inexhaustible.

Welcome to a club

And as a final piece of advice, make an effort to contact a local astronomy club. You can probably locate the one nearest to you by consulting the website of the Astronomical League (AL), by far the largest national organization of amateur astronomers ( http://www.astroleague.com ). The AL is composed of scores of local amateur astronomical clubs and groups, totaling thousands of individuals.

By attending local club meetings, you'll get to meet any number of fellow sky gazers who can offer you valuable advice. If you own a telescope, but are experiencing problems with it, there is no better place to go than an astronomy club whose members can offer assistance and helpful suggestions. Besides, there is also the camaraderie of spending time with other people from different walks of life who all share the same love for the nighttime sky.

So, good luck and enjoy your new telescope!

[Joe Rao serves as an instructor and guest lecturer at New York's Hayden Planetarium. He writes about astronomy for Natural History magazine, the Farmer's Almanac and other publications, and he is also an on-camera meteorologist for News 12 Westchester, N.Y.]
Posted by Mercury at 5:47 PM