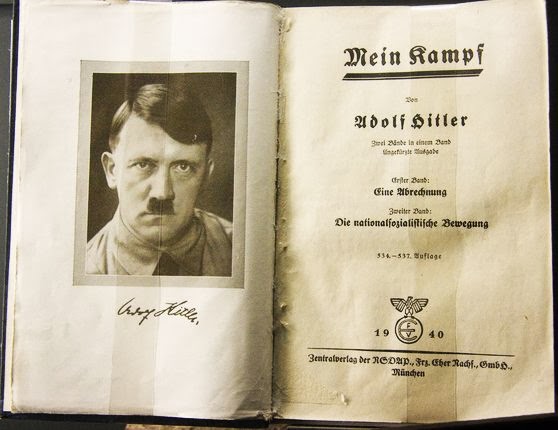 Roll over Dickens and Asimov. What is next...quotations from Chairman Mao Tse-tung's Little Red Book or Karl Marx's Das Kapital?

Digital editions of Mein Kampf have become a surprise hit online, according to author Chris Faraone, who has suggested that the newfound popularity of Adolf Hitler's tract is down to the fact that it can now be consumed "in the privacy of our own iPads".

Writing on the website Vocativ.com, author and journalist Faraone claims that "more than a dozen free English-language versions of Mein Kampf have been downloaded in excess of 100,000 times from the nonprofit Internet Archive alone", while paid-for e-versions are outselling Glenn Beck on iTunes and entering the charts on Amazon.com - with a 99-cent version currently topping the retailer's propaganda and political psychology chart .

In the UK, an ebook of Mein Kampf, retailing for 99p, tops Amazon.co.uk's propaganda and spin chart and its fascism and Nazism chart, and sits in second place in its political science and ideology bestseller list.

Another 99-cent version, from publisher Elite Minds, sits in 11th place in Amazon.com's World War II charts. "Sales are great," publisher Michael Ford, told Faraone, admitting to the "moral dilemma" he would face if he were to promote the book and advocate "something that could be misused". "I have not heavily promoted the book and decided, for the most part, to let it spread among those who have a true historical and academic interest naturally," said Ford.

Print sales of Mein Kampf are negligible, but Faraone believes the title's resurgence in digital format could be "a cultural curiosity much like what's happened with sleazy romance novels, which surveys show are increasingly consumed in more clandestine e-form".