Sleeping Beauty, Rosetta, woke up and responding to commands 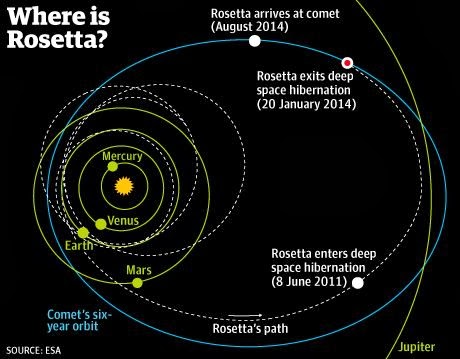 A signal confirming its alert status was received by controllers in Darmstadt, Germany, at 18:17 GMT.

Rosetta has spent the past 31 months in hibernation to conserve power as it arced beyond the orbit of Jupiter on a path that should take it to Comet 67P/Churyumov-Gerasimenko in August.

Engineers will now finesse the probe's trajectory and prepare its instruments for the daring encounter.

One of the highlights of the mission will be the attempt to put a small robotic lander, Philae, on the surface of the 4.5km-wide comet. This will occur in November.

There were nail-biting moments in the Darmstadt control room as its flight engineers waited for the signal to come through. Three quarters of the way through the hour-long window of opportunity, they got what they were waiting for.

Gerhard Schwehm, mission manager for Rosetta, said: "After 31 months in hibernation, what is 45 minutes to wait?"

Andrea Accomazzo, the spacecraft operations manager, said: "I think it was the longest hour of my life, but also one of the most rewarding."

Monday's message, when it arrived, was a simple one - just a spike on the screens here at the European Space Agency's operations centre.

It was picked up in California by a 70m dish belonging to the US space agency, and then routed to Germany.

The signal contained no spacecraft telemetry, but its mere receipt from 800 million km away confirmed to controllers that Rosetta's automated systems were operating as expected.

In the coming hours and days, the Darmstadt team will talk to Rosetta to establish the full status of its systems. 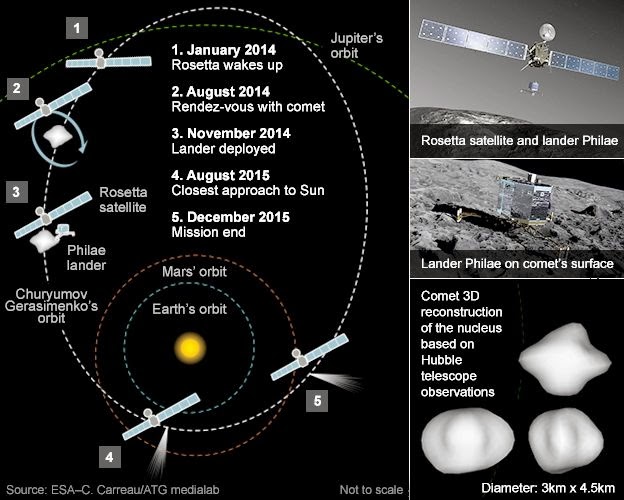 Rosetta was put into hibernation in June 2011 because its trajectory through the Solar System was about to take it so far from the Sun that its solar panels would harvest minimal energy. The decision was therefore taken to put the spacecraft in a deep sleep.

Now that it is arcing back towards the Sun, more power is becoming available to operate the probe.

"From now until mid-March, we have planned virtually no activities on the spacecraft. We can afford to run only some basic check-outs," explained Andrea Accomazzo.

"But from mid-March to the end of April, we will be switching on the instruments one by one. We'll check them out and in a few cases even update their software."

From May, Rosetta will begin firing its thrusters to begin zeroing in on Comet 67P. Today, the separation is nine million km away. By mid-September, it will have been reduced to just 10km.

Launched back in 2004, Rosetta has taken a rather circuitous route out to its target.

This has involved making a number of flybys of the inner planets, using their gravity to pick up sufficient speed for the eventual encounter.

It has already delivered some fascinating science, particularly from the close passes it made to two asteroids - the rocks Steins, in 2008, and Lutetia, in 2010.

The plan is for Rosetta to escort the comet as it moves closer towards the Sun, monitoring the changes that take place on the body. The Philae lander will report changes that occur at the surface.

Comets - giant "dirty snowballs", as some have called them - are believed to contain materials that have remained largely unchanged since the formation of the Solar System 4.6bn years ago.

Rosetta's data should act therefore as a kind of time machine, to enable researchers to study how our local space environment has changed over time.

"We will sample the physical and chemical composition of the comet," said Matt Taylor, Esa's Rosetta project scientist.

"This will give us knowledge on how and where the comet was formed, and about its subsequent journey through the evolution of the Solar System.

"We can connect that as well to the formation of the planets themselves. And, in addition, the elemental make-up of the comet can be considered 'star stuff' - it will provide us knowledge of the formation processes within the Sun itself."

Rosetta is being billed as the big space event of 2014, and it is clear from the general and social media reaction to Monday's wake-up that interest in the mission is considerable.

"In general, we try to find answers to fundamental questions, such as where do we come from, what will be our destiny and will we have to stick to this planet?

"The knowledge we get from missions like Rosetta - which is now moving into a very interesting stage - gets us closer to answering those types of questions."


"Rosetta the comet-chasing spacecraft wakes up"

There was a moment of silence, and then the room erupted. Two hundred scientists, engineers and journalists threw their arms in the air, cheered, and bear-hugged their nearest neighbours, whether they knew them or not.

Many had waited a decade for this. In 2004, the European Space Agency launched the Rosetta probe on an audacious mission to chase down a comet and place a robot on its surface. For nearly three years Rosetta had been hurtling through space in a state of hibernation. On Monday, it awoke.

The radio signal from Rosetta came from 800m kilometres away, a distance made hardly more conceivable by its proximity to Jupiter. The signal appeared on a computer screen as a tremulous green spike, but it meant the world – perhaps the solar system – to the scientists and engineers gathered at European Space Operations Centre in Darmstadt.

Speaking to the assembled crowd at Darmstadt, Matt Taylor, project scientist on the Rosetta mission, said: "Now it's up to us to do the work we've promised to do."

Just 10 minutes before he'd been facing an uncertain future career. If the spacecraft had not woken up, there would be no science to do and the role of project scientist would have been redundant.

The comet hunter had been woken by an internal alarm clock at 10am UK time but only after several hours of warming up its instruments and orientating towards Earth could it send a message home.

In the event, the missive was late. Taylor had been hiding his nerves well, even joking about the wait on Twitter but when the clock passed 19:00CET, making the signal at least 15 minutes late, the mood changed. ESA scientists and engineers started rocking on their heels, clutching their arms around themselves, and stopping the banter than had helped pass the time. Taylor himself sat down, and seemed to withdraw.

Then the flood of relief when the blip on the graph appeared. "I told you it would work," said Taylor with a grin.

The successful rousing of the distant probe marks a crucial milestone in a mission that is more spectacular and ambitious than any the European Space Agency has conceived. The €1bn, car-sized spacecraft will now close in on a comet, orbit around it, and send down a lander, called Philae, the first time such a feat has been attempted.

The comet, 67P/Churyumov-Gerasimenko, is 4km wide, or roughly the size of Mont Blanc. That is big enough to study, but too measly to have a gravitational field strong enough to hold the lander in place. Instead, the box of sensors on legs will latch on to the comet by firing an explosive harpoon the moment it lands, and twisting ice screws into its surface.

Rosetta and Philae will work together to photograph, prod and poke the comet as it hairs towards the sun and loops back out to the deepest reaches of the solar system. The comet is quiet now, but as it nears the sun it will start to erupt with plumes of gas and dust and develop a tail that could stretch for more than 1m kilometres.

"With Rosetta, we will track the evolution of a comet on a daily basis and for over a year, giving us a unique insight into a comet's behaviour and ultimately helping us to decipher their role in the formation of the solar system," said Taylor.

The Rosetta spacecraft has taken the long way round to reach the comet, circling Earth and Mars in the inner solar system before looping out towards Jupiter to bring it on course. On its travels through deep space, Rosetta has already snapped pictures of asteroid Steins in 2008, and asteroid Lutetia in 2010. Now that Rosetta has woken up, mission controllers can beam the probe a series of commands to ensure that subsystems and 21 scientific instruments aboard the spacecraft and Philae are in working order. Once they are happy that Rosetta has emerged from hibernation in good health, they can fire the spacecraft's thrusters to close the gap of 9m kilometres that separate machine and comet.

The mission ahead promises a spectacular demonstration of relative motion that could only be improved by the accompaniment of The Blue Danube. The comet is travelling at 60,000 kilometres per hour relative to the sun, but Rosetta will close up from behind at walking pace. Alas, in space, no one can hear your Strauss. "It's like driving on the M25 when the traffic is moving," said Taylor. "You are shooting along, but the car overtaking will come past you ever so slowly."

Rosetta is expected to send back its first images of the comet in May when it still 2m kilometres behind. At the end of May, mission controllers will send up commands for a major manoeuvre that will line Rosetta up for rendezvous with the comet in August.

Once Rosetta has reached the comet, the probe will begin to scan the surface for a suitable place to drop its lander. Sensors on board will measure the comet's gravitational field, its size and mass, and study the layer of gas and dust that cloaks the comet like an atmopshere.

Information gleaned by Rosetta will be pored over by ESA scientists, both to understand to comet, and to identify the best spot to land on. On 11 November, mission controllers aim to give the spacecraft the all clear to drop off the 100kg lander.

The lander is expected to take one or two hours to reach the comet, another move that will play out at walking pace as the comet, Rosetta and Philae all hurtle towards the sun at around 16 kilometres per second. Rosetta must get into an orbit that minimises any sideways movement for the lander relative to the comet, so it does not tumble or slide when it lands.

If Philae touches down safely, it will beam back a panorama of its extraordinary environment, along with high resolution images of the face of the comet. Using onboard equipment, the lander can analyse the chemical composition of the ice, dust and organic material that makes up the comet. The lander even wields a drill to pierce beneath the surface.

As the comet nears the sun, ice on its surface will transform into gas. With time, this erodes the surface of the comet. Though Philae is expected to die when its electronics overheat from use, the lander may hold fast to the comet and ride it around the sun for three laps before enough material breaks off to dislodge its harpoon.

"We will face many challenges this year as we explore the unknown territory of comet 67P/Churyumov-Gerasimenko and I'm sure there will be plenty of surprises, but today we are just extremely happy to be back on speaking terms with our spacecraft," said Taylor.