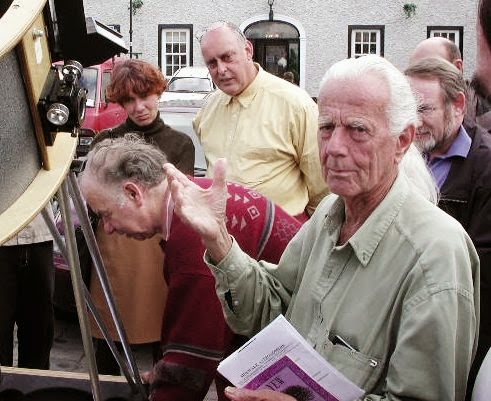 John Dobson, known as “the sidewalk astronomer“, and the inventor of the Dobsonian telescope mount, died yesterday 15 January 2014.

I had the pleasure of meeting John back in 2006 when he visited Glasgow Science Centre to give a talk in the planetarium. As planetarium manager at the time I was in John’s company for most of the two days he was in Glasgow, and became well used to his unorthodox – and mischievous – teaching style.

“How many stars are there in our solar system?” he asked, with a twinkle in his eye.
“One…?” I ventured, smelling a trap.
“Actually there are three. Jupiter and Saturn are stars too. They define a star as something that emits visible light. But Jupiter shines in infra-red; it gives off more than twice what it takes from the sun, but astronomers don’t see that, because they’re too retarded. You see, that’s the problem with talking to me – I throw you a curve ball.”

His most controversial views were regarding the Big Bang Model. It’s fair to say that John wasn’t a believer* – he told me he was “allergic” to it! He instead promoted a steady state model, where the receding galaxies “fell off the edge” and got recycled back in… To be honest I didn’t really follow his arguments to closely, but there’s no doubting the entertainment of his delivery.

Certainly the audience who came to Glasgow Science Centre’s planetarium to see John talk were thoroughly entertained. Perhaps not in a very orthodox way, nor with theories that were widely accepted in the astronomy community, nor indeed about what they thought they’d hear John speak about. The talk had been billed as “hear John Dobson, inventor of the Dobsonian telescope mount, talk about his revolutionary design and his passion for sidewalk astronomy”. He gave that five minutes at the start of the talk; the rest was non-standard cosmology and poking fun at the consensus.

He didn’t credit himself as the inventor of the Dobsonian mount. After all, astronomers had been using elements of it for a long time before John put them all together and began popularising this low-cost mount.

A Dobsonian mount is effectively a spinning plate with a cradle on it for holding the telescope. The plate spins allowing you to move the telescope from side to side (the azimuth co-ordinate, in astronomy speak) and the telescope can tilt in the cradle allowing you to move it up and down (the altitude co-ordinate). This is a far simpler mount than the alternatives, and can be built out of everyday items at low cost, meaning that more of your budget can go on the telescope tube itself, building larger tubes to collect more light (we call these large telescopes “light buckets”) and so get clearer, sharper images.

John himself never called them Dobsonians, instead referring to them as “sidewalk telescopes”. “For hundreds of years, wars were fought using cannon on ‘Dobsonian’ mounts; it’s nothing new,” he would say. But his design was innovative, and it brought the universe a little bit closer to us.

My primary telescope – the Skywatcher 250 PX – uses a Dobsonian mount. It’s an ideal scope for public astronomy events as it’s very quick to set up, and is really easy to operate. Want to move it? Just nudge or pull it.

John’s mount, and his passion for showing people the universe through a telescope, led to his popularising of “sidewalk astronomy”, which involves standing with a telescope out in a busy street in your town and showing passers-by views of the cosmos. Of course due to light pollution in towns and cities you’re limited as to what you can show, but the Moon and planets are easily visible from wherever you are. If your unsuspecting passer-by has never seen the rings of Saturn, or the moons on Jupiter, or mountain ranges and craters on our own Moon, you can be sure that their few minutes with your telescope will amaze them.

John Dobson will be remembered as the grandfather of sidewalk astronomy, but I’ll remember him most fondly as the very eccentric and enthusiastic man that I spent a couple of days with in Glasgow in 2006. The most vivid memory I have of John is taking him out for dinner the night he arrived in Glasgow, as I did with all visiting speakers. He didn’t eat meat, he informed me. And he didn’t eat processed food in restaurants. He saw that I was beginning to look worried. I suggested he might like a salad. With a grin he said “Why pay for a salad when there’s perfectly edible stuff just laying around?”, at which point he began rummaging in the flowerbeds for edible plants and weeds…

* Not that I’m a believer. I don’t believe in the Big Bang, rather I accept it as a model for the universe which fits all of the observations that we make. It’s true, to the limits of our current observations.

John Dobson...sidewalk astronomer...still around at 98
Posted by Mercury at 6:45 AM