The tenants of aesthetics are challenged 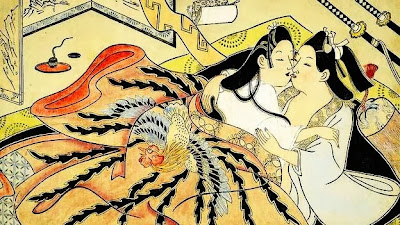 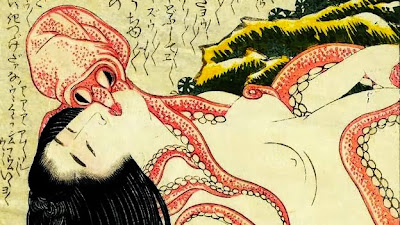 It is one of the most salacious images in the history of art: deep underwater, a gigantic pink octopus drags a naked young woman into a cleft between two rocks. As his coiling tentacles slither over her blemish-free body, caressing a nipple and encircling her nubile legs, this unlikely molluscoid lover pleasures his prostrate captive, who throws back her head in ecstasy while a second, smaller octopus plants a tender kiss upon her mouth.

A spellbinding, exhilarating and often eye-popping exhibition, Sex and Pleasure in Japanese Art, collating more than 150 works of shunga, opens this week at the British Museum in London. A copy of Hokusai’s notorious print once owned by the French connoisseur Edmond de Goncourt, who wrote a monograph about the artist, is included in the show, as well as a steamy translation of the picture’s abundant text, which contains several onomatopoeic sighs and exclamations signifying the woman’s fulfilment.

“Today shunga gets treated like obscene pornography,” explains Timothy Clark, who has curated the British Museum’s exhibition. “People who haven’t seen shunga before will be surprised by how explicit it can be. But this is sexually explicit art, not pornography, produced to exactly the same technical perfection as art in other formats by the same people. Hokusai was working during the Edo period, which had a playful spirit, and the octopus story comes from an ancient tale about a diver woman who stole a jewel from the Dragon King’s palace at the bottom of the sea. Hokusai was expecting a comic response. A lot of the scenarios in shunga are preposterous – there’s fantasy at work.”

When considering shunga, it is important to shed censorious attitudes towards sexuality that have been a fundamental part of western Christian culture for so long. Although printed shunga was officially illegal in Japan after 1722, it was widely tolerated – indeed, during the three centuries of its popularity many thousands of images were produced in a variety of formats: multi-volume books, bound albums sometimes exchanged as wedding gifts, painted handscrolls, and sets of small-format prints possibly sold in wrappers.

Shunga could be sensuous and comic, but it was rarely violent or exploitative. Most shunga depicts vigorous heterosexual couples in mutual bliss – and these prints were likely cherished by men and women, both young and old, from different strata of society, including samurai lords as well as prosperous merchants and commoners. “The division between art and obscene pornography is a Western conception,” says Clark. “There was no sense in Japan that sex or sexual pleasure was sinful.”

The golden age of shunga coincided with technical advances in printing around 1765 and lasted into the early 19th Century. In these decades many of the masters of the so-called ‘ukiyo-e’ colour woodblock print turned their attention to shunga, including Kitagawa Utamaro, whose ravishing masterpiece Poem of the Pillow (1788), a folding album containing 12 colour-printed illustrations, was one of 31 shunga works by the artist. “Utamaro is probably the most important shunga artist,” explains Clark. “Shunga forms a high percentage of his overall oeuvre. But he had a naturally very sensuous line radiating passion no matter what he drew – it didn’t have to be people having sex.”

In much shunga, the protagonists have meticulously rendered and enlarged genitals – but the effect is rarely grotesque. Instead, shunga artists create swirling compositions to reflect the frenzied ardour of lovemaking, and play with pleasing contrasts between bare flesh and gorgeous, beautifully patterned textiles.

Perhaps nobody has described the effect of shunga more elegantly than the 19th Century aesthete Goncourt, who wrote about “the furious, almost angry copulations; the somersaults of rutting pairs, knocking over the folding screen of a bedroom; the mingling of bodies which dissolve into one another; the sensual excitability of the arms, both inviting and resisting coitus; the epilepsy of the feet, toes twisted, waving in the air; the devouring mouth-to-mouth kisses, the swooning woman, head thrown back and touching the floor, with the petite mort on her face, eyes closed under painted lids; finally, the force, the power of the outline which makes the drawing of a phallus equal to that of the hand in the Musée du Louvre attributed to Michelangelo”. If that doesn’t incite passion to discover shunga, then nothing will.

[Alastair Sooke is art critic of The Daily Telegraph.]
Posted by Mercury at 11:43 AM