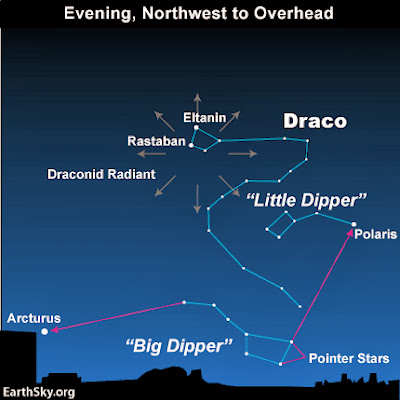 The radiant point for the Draconid meteor shower almost coincides with the head of the constellation Draco the Dragon in the northern sky. That’s why the Draconids are best viewed from the Northern Hemisphere. The Draconid shower is a real oddity, in that the radiant point stands highest in the sky as darkness falls. That means that, unlike many meteor showers, the Draconids are more likely to fly in the evening hours than in the morning hours after midnight. This shower is usually a sleeper, producing only a handful of languid meteors per hour in most years. But watch out if the Dragon awakes! In rare instances, fiery Draco has been known to spew forth many hundreds of meteors in a single hour. In 2013, the thin waxing crescent moon won’t cast enough moonlight to interfere with the Draconids. Try watching at nightfall and early evening on October 7 and 8.

The constellation Draco the Dragon will be spitting out meteors, also known as shooting stars. The Draconid shower is predicted to produce the greatest number of meteors on the night of October 7, but the next night might be good, too. Watch for them first thing at nightfall. Fortunately, the thin waxing crescent moon won’t interfere with this year’s Draconid meteor display. In fact, the moon and planets set in the southwestern sky around nightfall, serving as a wonderful prelude to tonight’s Draconid meteor show.

If you live at middle and far northern latitudes anywhere around the globe, this shower is well worth a try. Unlike many major showers, the radiant for the Draconids is highest up at nightfall, so it’s best to watch for these meteors as soon as darkness falls, not in the wee hours before dawn. Spend an hour or more under a dark and open sky, lying down and with your feet pointing northward. Oftentimes, this hard-to-predict shower doesn’t offer much more than a handful of languid meteors per hour. But watch out if the Dragon awakes!

Once again, watch at nightfall and early evening because that’s when the radiant point for the Draconid shower is highest in the nighttime sky. We emphasize it, because most meteor showers are best after midnight … but not this one.

The Draconid meteor shower produced awesome meteor displays in 1933 and 1946, with thousands of meteors per hour seen in those years. Even two years ago – in October 2011 – people around the globe saw an elevated number of Draconid meteors, despite a bright moon that night. European observers saw over 600 meteors per hour in 2011.

As far as we know, nobody is calling for the Draconid meteor shower to burst into storm in 2013. But you never know for sure with the Draconids, so it’s worth watching out for on the moonless evenings of October 7 and 8. Just keep in mind that meteor showers are notorious for defying predictions, either surpassing or falling shy of expectation. The only way to know for sure is to try to watch the shower.

Most meteor showers are named for the constellation from which the meteors radiate on the sky’s dome. The Draconids, however, are sometimes also called the Giacobinids, to honor the man who first sighted the comet that spawned this meteor shower.

Michel Giacobini discovered this comet on December 20, 1900. Another sighting in 1913 added the name Zinner to that of the comet, which thus became 21P Giacobini-Zinner. It is a periodic comet, which returns every 6 years and 4 months. Tracking this comet, and noting this October meteor shower, helped astronomers figure out how to predict meteor showers in 1915. The great Draconid/Giacobinid meteor storms occurred in 1933 and 1946. The comet returned in 1998 as well, and the Draconids picked up that year, but only to a rate of about 100 per hour. Then in 2011, observers in Europe saw over 600 Draconid meteors per hour.

Why was the meteor shower so good in 2011? And why is it good in some years but not in others? Comet Giacobini-Zinner was at perihelion – closest to the sun – in 2011. Thus it was in the inner solar system, Earth’s own neighborhood. Meteors are debris from comets, so when a parent comet is nearby, a good meteor shower is possible.

In 2013 – approximately two years after the comet’s 2011 perihelion (closest point to the sun) – there might be another meteor storm around the time of this shower’s peak. Or there might not be.

Perhaps Draconid meteor rates will go up this year. Or we might see only a handful of meteors per hour. Under normal conditions, when astronomers speak of a meteor shower peaking, it is similar to a weather forecaster saying, “The heaviest rain/snow is predicted for such-and-such hour.” In other words, the prediction might not be precise, since nature is always unpredictable to a degree. But, generally speaking, the rate of meteors falling will be higher during the peak of a meteor shower than on any other night.

Bottom line: In 2013, the Draconid meteor shower – also called the Giacobinids – peak on the night of October 7. The night of October 8 might feature meteors, too. The radiant is highest in the evening hours, so no need to wait until after midnight. Find a dark, country sky and as much open sky as possible. Lie down on a reclining chair and look upward, starting at nightfall. How many Draconid meteors can you count in the moon-free skies these next few evenings? No one expects a Draconid storm this year, but it’s fun to wait and see.

The Draconid meteor shower appears each October, and it can produce a big show or a big shrug. Tonight, however, there's reason for hope.

The Draconids — expected to peak Monday around sunset — occur annually thanks to the ribbon of space dust left behind by Giacobini-Zinner, a comet that travels around the sun every 6½ years. In October, Earth passes through this dust, and as pieces of  filament encounter our atmosphere, light streaks through the sky. What's great about the Draconids is that, although generally more faint, they're slower-moving meteors, so the light trails linger.

But the Draconids can be lazy. Some years, stargazers notice as few as three or four shooting stars an hour. If Earth hits a thicker cloud of dust, however, there's a better show.

In 2011, for instance, the peak was 660 meteors per hour. At the time, NASA's Bill Cooke told the Los Angeles Times: "Most years we just pass through gaps between filaments. ... Occasionally, though, we hit one nearly head on — and the fireworks begin."

Last year, an outburst of activity was spotted by radar — 1,000 meteors per hour — but stargazers didn't see much. SpaceWeather.com said visual reports were sparse, suggesting the Draconids were very faint.

For 2013, observers are hoping the stars align — a thick cloud of dust and plenty of activity visible by the human eye.

The moon and planets will set in the southwestern sky at nightfall, EarthSky.com reports, with no waxing crescent moon getting in the way of the display. The site says this year's Draconids are a good bet for stargazers in middle and far northern latitudes around the globe. Lie down under a dark, open sky with your feet pointed to the north. And give yourself an hour or more to stare skyward.
Posted by Mercury at 11:56 AM