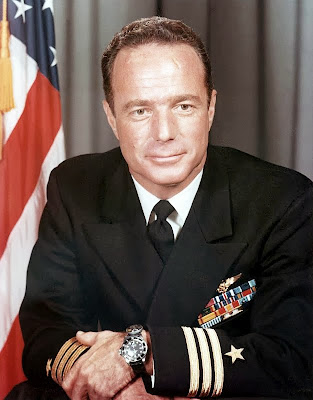 Six of the seven of the Mercury Seven have passed away...John Glenn is the last.

M. Scott Carpenter, whose flight into space in 1962 as the second American to orbit the Earth was marred by technical glitches and ended with the nation waiting anxiously to see if he had survived a landing far from the target site, died on Thursday in Denver. He was 88 and one of the last two surviving astronauts of America’s original space program, Project Mercury.

His wife, Patty Carpenter, announced the death. No cause was given. Mr. Carpenter had entered hospice care recently after having a stroke.

His death leaves John H. Glenn Jr., who flew the first orbital mission on Feb. 20, 1962, and later became a United States senator from Ohio, as the last survivor of the Mercury 7.

When Lieutenant Commander Carpenter splashed down off Puerto Rico in his Aurora 7 capsule on May 24, 1962, after a harrowing mission, he had fulfilled a dream.

“I volunteered for a number of reasons,” he wrote in “We Seven,” a book of reflections by the original astronauts published in 1962. “One of these, quite frankly, was that I thought this was a chance for immortality. Pioneering in space was something I would willingly give my life for.”

For almost an hour after his capsule hit the Caribbean, there were fears that he had, in fact, perished. He was 250 miles from his intended landing point after making three orbits in a nearly five-hour flight. Although radar and radio signals indicated that his capsule had survived re-entry, it was not immediately clear that he was safe.

A Navy search plane finally spotted him in a bright orange life raft. He remained in it for three hours, accompanied by two frogmen dropped to assist him, before he was picked up by a helicopter and taken to the aircraft carrier Intrepid.

The uncertainty over his fate was only one problem with the flight. The equipment controlling the capsule’s attitude (the way it was pointed) had gone awry; moreover, he fired his re-entry rockets three seconds late, and they did not carry the anticipated thrust. He also fell behind on his many tasks during the flight’s final moments, and his fuel ran low when he inadvertently left two control systems on at the same time.

Some NASA officials found fault with his performance.

“He was completely ignoring our request to check his instruments,” Christopher Kraft, the flight director, wrote in his memoir “Flight: My Life in Mission Control” (2001). “I swore an oath that Scott Carpenter would never again fly in space. He didn’t.”
Mr. Carpenter was the fourth American astronaut in space. Alan B. Shepard Jr. and Virgil I. Grissom flew the first two Mercury flights, and then Mr. Glenn orbited the Earth. Mr. Carpenter was the fourth man to go into orbit. Two Russians in addition to Mr. Glenn had preceded him.

Malcolm Scott Carpenter was born on May 1, 1925, in Boulder, Colo. His family moved to the New York City region when his father, Marion, got a job there as a research chemist. His mother, Florence, contracted tuberculosis when Scott was a child, and she took him with her when she returned to Boulder to be treated at a sanitarium. The marriage broke up, and Scott was guided by his maternal grandfather, Victor Noxon, who owned and edited a Boulder newspaper. He grew fond of a rugged outdoor life and became enthralled by the prospect of flying.

Mr. Carpenter became a naval aviation cadet in 1943, but World War II ended before he could obtain his wings. He entered the University of Colorado afterward and received a Navy commission in 1949.

He flew patrol planes in the Pacific during the Korean War, then trained as a test pilot, and in April 1959 he was among the seven military pilots chosen as the Mercury astronauts, the beginning of America’s quest to carry out President John F. Kennedy’s goal to put a man on the Moon.

Mr. Carpenter was highly accomplished in communications and navigation in addition to his flying skills. He was also in outstanding physical condition, exceeding several NASA performance standards.

But Donald K. Slayton was scheduled to be the next astronaut in orbit. When Mr. Slayton was grounded because of a heart irregularity, Lieutenant Commander Carpenter got the flight.

His mission called for greater pilot involvement than Mr. Glenn’s. With photographic tasks to perform and science experiments to oversee, he seemed to be having a grand time, though the cabin became uncomfortably warm. But serious trouble arose when the equipment controlling the way the capsule was facing malfunctioned, requiring him to determine the capsule’s proper attitude visually.

“The last 30 minutes of the flight, in retrospect, were a dicey time,” he recalled in his memoir “For Spacious Skies” (2002), written with his daughter Kris Stoever. “At the time, I didn’t see it that way. First, I was trained to avoid any intellectual comprehension of disaster — dwelling on a potential danger, or imagining what might happen. I was also too busy with the tasks at hand.”

Splashing down 250 miles from the nearest recovery ship, he got out of his capsule through a top hatch, then inflated his raft and waited to be picked up.

Finally the voice of mission control, Shorty Powers, announced, “An aircraft in the landing area has sighted the capsule and a life raft with a gentleman by the name of Carpenter riding in it.”

President Kennedy greeted Lieutenant Commander Carpenter and his family at the White House in June 1962 after the Carpenters had been hailed at parades in Denver and Boulder and honored at City Hall in New York. A few days after Mr. Carpenter’s mission, the University of Colorado gave him a long-delayed degree in aeronautical engineering at its commencement, citing his “unique experience with heat transfer during his re-entry.” He had missed out on his degree by not completing a course in heat transfer as a senior in 1949.

But the issue of the flight’s brush with disaster lingered. A NASA inquiry determined that because of a 25-degree error in the capsule’s alignment, the retro rockets had fired at an angle that caused a shallower than normal descent. That accounted for 175 miles of the overshoot, with the remaining 75 miles caused by the late firing of the rockets and their failure to provide the expected thrust.

Mr. Kraft, the flight director, had been angry that Mr. Slayton was denied the mission because of his heart problem, and he was furious at Lieutenant Commander Carpenter, feeling that he had not paid sufficient attention to instructions from the ground.

Mr. Carpenter’s prospect of obtaining another NASA mission was ended by a motorbike injury that led to his leaving NASA in 1967.

In a 2001 letter to The New York Times in response to a review of Mr. Kraft’s book, Mr. Carpenter wrote that “the system failures I encountered during the flight would have resulted in loss of the capsule and total mission failure had a man not been aboard.”

“My postflight debriefings and reports,” he added, “led, in turn, to important changes in capsule design and flight plans.”

In his book “The Right Stuff” (1979), which told how the original astronauts reflected the coolness-under-pressure ethos of the test pilot, Tom Wolfe wrote that Mr. Kraft’s criticism fueled NASA engineers’ simmering resentment of the astronauts’ status as pop-culture heroes. The way Mr. Wolfe saw it, word spread within NASA that Mr. Carpenter had panicked, the worst sin imaginable in what Mr. Wolfe called the brotherhood of the right stuff.

Mr. Wolfe rejected that notion. “One might argue that Carpenter had mishandled the re-entry, but to accuse him of panic made no sense in light of the telemetered data concerning his heart rate and his respiratory rate,” he wrote.

“The Right Stuff” was made into a movie in 1983, with Charles Frank as Mr. Carpenter.

Mr. Carpenter also carved a legacy as a pioneer in the ocean’s depths. He was the only astronaut to become an aquanaut, spending a month living and working on the ocean floor, at a depth of 205 feet, in the Sealab project off San Diego in the summer of 1965. When he returned to NASA, he helped develop underwater training to prepare for spacewalks. He returned to the Sealab program, but a thigh injury resulting from his diving work kept him from exploring the ocean floor again.

He retired from the Navy in 1969 with the rank of commander, pursued oceanographic and environmental activities and wrote two novels involving underwater adventures.

Among his many projects, Mr. Carpenter joined with fellow astronauts of the original Mercury 7 to create the Astronaut Scholarship Foundation to aid science and engineering students. In 2006, he returned to the University of Colorado to present a scholarship to a student studying plasma physics.

He used the occasion to reflect on the thrill he experienced. Spaceflights had become “old hat,” he said, but his ardor for space travel remained undimmed.

“The flight experience itself is incredible,” The Rocky Mountain News quoted him as saying. “It’s addictive. It’s transcendent. It is a view of the grand plan of all things that is simply unforgettable.”

Mr. Carpenter attended ceremonial events in his final years, when he was reunited with fellow astronauts.

He joined with President George W. Bush and Buzz Aldrin, the second man to walk on the Moon, on Veterans Day 2008 in a ceremony on a Hudson River pier aboard the Intrepid Sea, Air and Space Museum, formerly the ship whose helicopter had plucked him to safety.

Mr. Carpenter was on hand at Cape Canaveral with Mr. Glenn and veterans of the Project Mercury support teams at events a few days before the 50th anniversary of Mr. Glenn’s pioneering orbital flight.

Both men had expressed hopes that America’s space program would be revived. 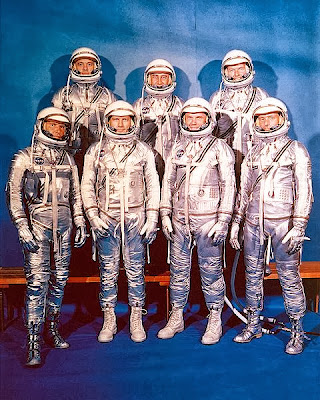