There ought to be a word for “the limbo-like precincts of an airport baggage claim, where groggy travellers gather around the motionless treads of empty conveyor belts.” It is a singularly desolate scene, and there should be a succinct way for a forlorn luggage-seeker to text a quick apology to the friend who is idly circling the airport roads. Now, there is: “baggatory.”

That clever turn is just one of a couple hundred neologisms coined by Liesl Schillinger in her new book, “Wordbirds: An Irreverent Lexicon for the 21st Century.” Other gems include “social crawler” (a party-goer who accidently mingles with losers); “Facebook-happy” (a miserable person who fakes bliss in carefully managed Facebook posts); “polterguy” (an ex-boyfriend who haunts future relationships); “factose intolerant” (a person who claims a false allergy or irrational antipathy to certain foods); and “rotter” (the bottom drawer in the refrigerator where produce goes to putrefy). Most of the words and phrases in the collection are accompanied, in a bit of whimsy, by an illustration of birds acting out the scenes described: the “social crawler” is a peacock mixing with pigeons.

The word “neologism” dates to the seventeen-seventies, taken from Greek via French, meaning “new speech.” But the practice of coining new words goes back to the beginning of language itself. It accelerated as culture accelerated, and by the nineteenth century conservative types were worried that industry and science were flooding the linguistic marketplace with all kinds of shoddy fad words, and that the language had to be protected from interlopers. Others embraced the dynamism. In a letter to John Adams, in 1820, Thomas Jefferson, a man of business and science as well as politics, wrote, “I am a friend to neology. It is the only way to give to a language copiousness and euphony.”

Of-the-moment words still have their skeptics: every time a major dictionary announces that they’ve added a trendy word, like “twerking,” a chorus of worried head-shakers turns up online to complain that the whole country is going to pot. This is nothing new, but the occasional vehemence of the response may be due to the sense that novel words are coming at us faster than ever. Schillinger, in her introduction, writes that “over the last two decades new technologies, new means of communication, and sweeping social changes have crashed down on society like an avalanche.” Stodgy lexicographers, she writes, just need to keep up.

The Internet, for better and worse, has produced a pile of jargon that’s now been absorbed into the wider language. And its various associated social tools function as a vast and productive word farm—combining the longstanding instinct to match language to the modern condition with the very recent ability to share one’s experiments with a wide audience. The Internet Age has produced more writers per capita than ever before. Has it made us better writers or worse? Smarter or more distracted, callow, and stupid? Clive Thompson, in his new book on the ways that technology has improved cognition, writes that one of the unexpected developments of innovation is that “status-update tools like Twitter have produced a renaissance in witty, aphoristic, haikuesque expression.” With all the bad (“wut r u doooooing?”) comes plenty of good—an explosion of short and smart bits of humor, insight, and commentary. The lines between amateur and professional have eroded; it is as if the world is writing together to try to sort out the large and small questions of the day. Twitter, especially, is an ideal incubator for neologisms. Space is limited, so running words together becomes a stylistic necessity—function drives form, and portmanteaus reign.

One of Schillinger’s better creations is “fratois,” meaning “a hearty slang or patois used by bonhomous men that makes them sound like back-slapping fraternity brothers.” This is a mocking term, evoking locker-room towel snapping or George W. Bush’s Oval Office. It also brings to mind another strain of neologism currently enjoying popularity, what Katherine Connor Martin, of the Oxford University Press, identifies as the “portmanbro.” She cites such examples as “bromance,” which is now in general use, and other terms like “brahphet” (“the guy who thinks he knows everything”) and “brobituary” (“a short description of an ex bro who went off and got married”). Most of these terms make fun of the male subspecies known as bros, but Martin cheekily warns of the dangers of metonymy: What if, by “being the sort of person who says ‘bro,’ a person becomes a bro”? This might go further: Are the people who trade in contemporary neologisms astute critics of the moment, or are they somehow defiled by their use of this moment’s language?

If neologisms seem suddenly ubiquitous, perhaps this proliferation is the result of our current pace of life. If we are expected to multitask, then shouldn’t our language have to, too? Searching for innovation, we might seek out something that predates the Internet by a few years: the German language. German has a fine architecture, in which appositive phrases are joined into compounds, leading to long and goofy-sounding words that express often complicated factual and emotional information. One popular Web convention of late is the phrase “There should be a German word for ….” Take a situation that I often face: the struggle after receiving an e-mail to find a response time that is long enough that you don’t appear creepy or desperate but short enough that you don’t forget to respond altogether. To such linguistic questions come answers, in Ben Schott’s hugely inventive new book, “Schottenfreude: German Words for the Human Condition.” There are a hundred and twenty new and evocative words; here are four:

Leertretung
Stepping down heavily on a stair that isn’t there.
Void-Stepping

Tageslichtspielschock
Being startled when exiting a movie theater into broad daylight.
Day-Light-Show-Shock

Gaststättenneueröffnungsuntergangsgewissheit
Total confidence that a newly opened restaurant is doomed to fail.
Inn-New-Opening-Downfall-Certitude

That last one may be the longest in the book (thankfully, there are pronunciation guides). Each word has an accompanying anecdote, fact from history, or literary citation provided on the facing page. They are cross-referenced and indexed. Several of Schott’s creations answer needs generated by the hyper-connected present, but it is, in its tone and organization, pleasantly pre-Web—a self-enclosed thing that rewards another, older kind of multitasking: reading, laughing, and learning. 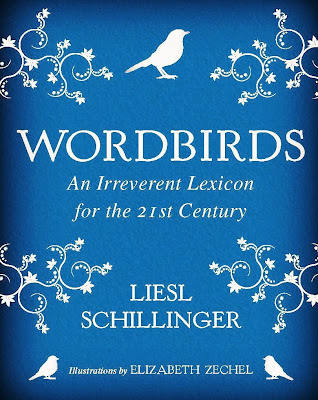 Wordbirds: An Irreverent Lexicon for the 21st Century