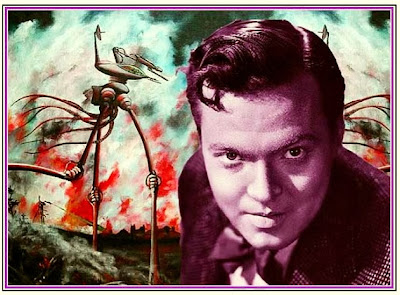 It was on this day in 1938 that a cylindrical Martian spaceship landed in Grover's Mill, New Jersey, and began incinerating onlookers with an alien heat ray, an event that was covered by the Columbia Broadcasting System and its affiliated stations, and that caused widespread alarm and mass hysteria. News of the attack interrupted a program of live dance music, the reports growing more frequent and ominous as the hour wore on, until the New Jersey state militia had been obliterated and three Martian tripod battle machines began ravaging the landscape.

Of course, the broadcast was a hoax, a cleverly crafted Halloween prank composed of simulated on-the-spot news bulletins based on the H.G. Wells novel, The War of the Worlds. The broadcast had been prefaced with the announcement that what would follow was a dramatic presentation by Orson Welles and the Mercury Theatre on the Air, but many listeners missed the introduction and panic ensued. People in New Jersey fled the area convinced they could smell poison gas and see fiery flashes from the tripods in the distance.

It has been estimated that of the 6 million people who heard the original broadcast, more than 1.5 million believed it to be true and more than a million others were genuinely terrified, and contemporary accounts tell of police stations swamped with calls. Within a month there were more than 12,000 newspaper articles on the broadcast and its impact, and as far away as Germany Adolf Hitler is said to have cited it as "evidence of the decadence and corrupt condition of democracy." Many listeners sued the network for mental anguish, claims that were all denied save one for a pair of size nine black shoes, by a man from Massachusetts who complained he'd had to spend what he'd saved for new shoes to escape the invading Martians. Welles insisted that that claim be reimbursed.

Welles and the Mercury Theatre were censured, but the broadcast secured Welles an instant, notorious fame. In 1988, Grover's Mills, New Jersey, celebrated its hour of fame by installing a Martian Landing Site monument near Grover's Mill Pond, not far from the remains of a water tower shot to pieces by its frightened residents 50 years before.

In New York, 75 years ago, thousands of people listening to Orson Welles' reading of The War of the Worlds were convinced it was reality. Here is the Telegraph's 1938 report

The Federal authorities to-day began investigation of the most amazing episode in the history of broadcasting, the dramatisation of H. G. Wells’s novel” The War of the Worlds,” which last night flung thousands into a state of panic, and convinced them that the United States was being invaded by a host of supermen from Mars.

The names of American cities were substituted for the original place-names, and Mr. Wells today cabled his American representative, Mr. Jacques Chambrun, stating that “totally unwarranted” liberties had been taken. He also expressed deep concern at the effect of the broadcast.

Mr. Chambrun has placed the matter in the hands of his lawyers.

He said to me: “At no time was it explained that this dramatisation would take liberties that amounted to complete rewriting of the novel, rendering it an entirely different story.

The play was presented as a series of news bulletins and commentaries. Monsters as tall as skyscrapers and armed with death rays were described by the announcer.

“One of the gigantic creatures,” he said, “is straddling the Pulaski skyway. [The road carried on a viaduct out of Jersey City.] We warn the people to evacuate New York City as the Martians approach.”

Fantastic as it may seem, scores of reports from every part of the country bear witness to the fact that the wildest fear took hold of hundreds of households from Rhode Island to California.

Mr. Welles was stunned by the results of his efforts because, he said this afternoon, he hesitated to put the show on, thinking “it might bore people.”

The Columbia Broadcasting System, no less perturbed, points out that the programme was interrupted four times with reminders to listeners that it was all just a play from the New York studio.

The panic was caused by the fact that many persons who tuned in casually became convinced that they were listening to authentic news bulletins describing the wholesale destruction of cities in Eastern America. A wave of terror swept the nation from coast to coast and produced results without precedent.

Thousands of people in New York and New Jersey fled into the streets. Scores were treated in the hospitals for shock, and many suffered heart attacks.

When the truth became known the victims of this mass hysteria were naturally highly indignant and typical expressions of opinion to-day were, “rotten,” “asinine,” “criminal,” “disgraceful,” and “a public outrage.”

Never has an authentic news announcement brought such startling reaction. Some people ran about affirming that they had actually seen the invading Martians and heard terrific explosions.

People who believed these strange events had come to pass had only one thought – to escape. They snatched a few belongings, packed their families into their cars, and started driving wildly towards the open spaces. Policemen on traffic duty were dumbfounded by the spectacle of cars rushing past well in excess of the speed limit

Terror took hold of certain districts in Harlem, New York’s great negro quarter, where people either fled or crowded into the churches to pray. Residents of many Southern cities gathered in the streets to pray. At Indianapolis a woman ran screaming into a church where evening service was being held and shouted: “New York has been destroyed. It’s the end of the world. Go home and prepare to die.”

One man arrived home to find his wife in the act of taking poison, and another man, who had gone to Reno for divorce proceedings, immediately took a ’plane for New York to give any help he could to his wife

Unable to get the Columbia studios on the ’phone, New York police sent a motorcyclist to find out what was happening.

In New Jersey traffic jams were caused by the press of people, who rushed into the streets, and police cars searched for persons reported to be injured by the falling meteor in which the Martians were supposed to have landed.

Some people believed that the destruction had actually been caused by the meteor, and two geology professors of Princeton University hunted for fragments.

They had been told that 1,500 persons had been killed by the meteor at a point a few miles away.

At Newark New Jersey, all the occupants of blocks of flats left their homes with wet towels round their heads as improvised gas masks.

Men of the National Guard of New Jersey started reporting for mobilisation, and a man at San Francisco telephoned the police, saying: “Where can I volunteer? We’ve got to stop this awful thing.”

Throughout the night all broadcasting stations made announcements intended to allay these astonishing fears, and the panic subsided as quickly as it spread.

Among the more lurid passages of to “The War of the Worlds” broadcast, which were spoken to the accompaniment of stage explosions and other startling sounds were:

“Ladies and gentlemen, I have a grave announcement to make. Incredible as it may seem, strange beings who landed in New Jersey to-night are the vanguard of an invading army from the planet Mars.

“At this moment martial law prevails throughout New Jersey and Eastern Pennsylvania.

“We take you now to Washington for a special broadcast on the national emergency by the Secretary for the Interior.”

At this point the actor taking the part of the Secretary addressed the nation. Hair-raising descriptions of the futile efforts to repulse the Martians followed, culminating with this passage, “There are Martian cylinders all over the country. There is one outside Buffalo and one in Chicago.

“I am speaking from the roof of the broadcasting building in New York. The bells you hear are warning the people to evacuate the city as the Martians approach.

“This may be the last broadcast.

“We will stay here until the end.

“People are now holding a service below us in St Patrick’s Cathedral. This is the end. Black smoke is drifting over the city.

“People in the streets are running towards the East River. Thousands of them are dropping like rats. Now the smoke is spreading faster.

“The people are trying to run away. It is no use. They are dropping like flies.

There the actors voice trailed off, in a well-simulated last gasp.