A flaw in Nobel Prize awards? 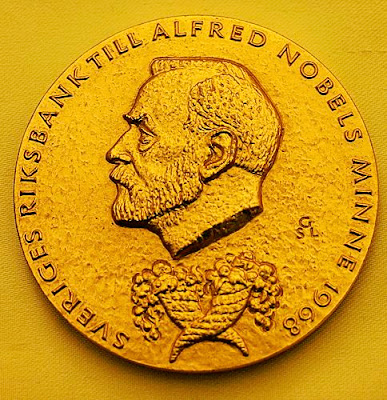 He has a point.

The Nobel Prize in Physics should also have gone to the CERN laboratory in Switzerland, a member of the awarding committee said Wednesday.

“I think it’s wrong,” Anders Barany, a member of the Royal Swedish Academy of Sciences told AFP, commenting after the decision Tuesday, which was delayed for an hour due to “a lot of discussion.”

“I think those experimental researchers have done incredibly fantastic work and should be rewarded.”

Peter Higgs of Britain and Francois Englert of Belgium won the Nobel Prize for Physics for theoretical work on a particle that explains why the Universe has substance.

The presumed particle was discovered last year by a mega-scale physics lab near Geneva operated by the European Organisation for Nuclear Research (CERN), after a decades-long search.

Many had expected the lab to share the Nobel Prize, however it was only mentioned in a brief note accompanying the decision.

“This has never been done before. It’s a fine recognition but I don’t think it’s enough,” said Barany.

“It’s too watered down, too little to be only mentioned in the text like that. I think it’s very clumsy with that kind of text.”

Although the Nobel Peace Prize has been awarded to organisations in the past, that has never occurred with the science prizes.
Posted by Mercury at 11:36 AM