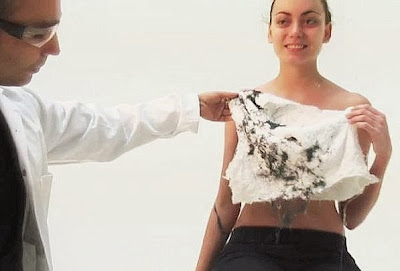 Maybe it's a fad like the "paper dress". I don't think that popular clothiers have to be concerned at the moment.


"Spray-On Clothing Could Deliver a Suit in a Can"

Someday, packing for a trip might be as simple as stowing a spray can of colloidal polymer mix for making your own spray-on clothes. Whether it’s a T-shirt or evening attire, spray-on fabric is a novel way to make a variety of light-use fabrics.

British fashion designer Manel Torres dreamed up the idea after attending a wedding and watching people spray each other with Silly String, filaments of plastic propelled in liquid form from an aerosol can. “I thought, wouldn’t it be neat if there was a way to create a material that could be sprayed to cover a larger surface area and used for clothing?” he says. To do this, he went back to school at Imperial College London, earned a PhD in chemical engineering, and launched Fabrican, Ltd., with Paul Luckham, a chemical engineering professor, also at Imperial.

Once sprayed onto a surface the instant fabric forms a nonwoven material, Torres says. This formula consists of short fibers bound together with polymers and a solvent that delivers the fabric in liquid form. The material is sprayed directly onto a person’s bare skin where it dries almost instantly. It can be easily peeled off because the polymers do not bind to skin. Other variants would adhere to surfaces. “The difference is largely in the formulations, but also in the method of spraying,” he says, adding they have experimented with spray guns, aerosol nozzles, portable canisters and jet sprays for both industrial and customized applications. To create a shape—such as a flaring skirt—the solution would be sprayed onto a surface with that desired shape.

The material’s characteristics—such as strength and texture—depend on the type of fibers mixed into the solution. Possibilities include natural fibers such as wool, cotton, silk or cellulose as well as synthetic fibers such as nylon. The fabric itself is like a thin, slightly stretchy suede and can be applied in layers to make it thicker, Torres says. But the texture and feel differs depending on the types of fabrics are mixed into the solution.

The wearable fabric feels quite cool when it is first sprayed on, but warms up to body temperature within seconds. Some models describe the spray-on clothing as feeling like a “second skin,” "like being dressed but feeling naked," Torres says.

After a person is finished wearing a spray-on garment, it can be recycled. This is done by shredding or cutting the garment into small pieces and dissolving it in a solution. Smaller pieces of fabric dissolve more easily than big ones do, and resemble tissue dissolving in water, Torres says. The propellant used to spray the fabric is the same substance as the solvent, which simplifies the recycling process because you don’t have to have another solution or solvent on hand, Luckham says.

The team is also developing spray-on, lightweight waterproof plaster casts and testing prototypes in partnership with U.K. military personnel who have lost limbs in combat. Commercialization of a final product is expected once testing has been completed. Spray-on bandages and other medical applications are also under development. An advantage of the spray-on fabric is that it's sterile when applied, which makes it attractive for emergency applications such as field dressings, Torres says.

One automotive company is working with Fabrican to develop spray-on fabric for car interiors. The challenge is to create a fabric strong and durable enough to withstand the daily wear and tear of the family car or a commercial vehicle.

Near-term, Luckham envisions giving people the ability to spray small amounts of fabric onto surfaces to create an instant face cloth or towel—or even using spray-on materials as decorations similar to papier mâché.