Many of the GOP political party should take this course...Chinese philosophy 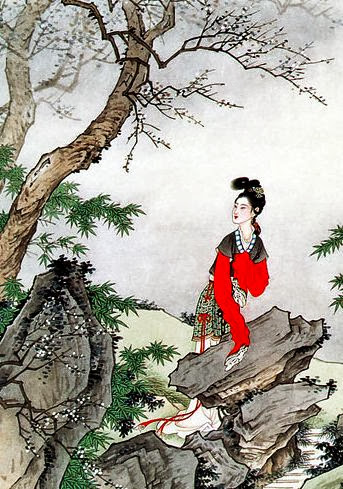 "Why Are Hundreds of Harvard Students Studying Ancient Chinese Philosophy?"

The professor who teaches Classical Chinese Ethical and Political Theory claims, "This course will change your life."

Picture a world where human relationships are challenging, narcissism and self-centeredness are on the rise, and there is disagreement on the best way for people to live harmoniously together.

It sounds like 21st-century America. But the society that Michael Puett, a tall, 48-year-old bespectacled professor of Chinese history at Harvard University, is describing to more than 700 rapt undergraduates is China, 2,500 years ago.

Puett's course Classical Chinese Ethical and Political Theory has become the third most popular course at the university. The only classes with higher enrollment are Intro to Economics and Intro to Computer Science. The second time Puett offered it, in 2007, so many students crowded into the assigned room that they were sitting on the stairs and stage and spilling out into the hallway. Harvard moved the class to Sanders Theater, the biggest venue on campus.

Why are so many undergraduates spending a semester poring over abstruse Chinese philosophy by scholars who lived thousands of years ago? For one thing, the class fulfills one of Harvard's more challenging core requirements, Ethical Reasoning. It's clear, though, that students are also lured in by Puett's bold promise: “This course will change your life.”

His students tell me it is true: that Puett uses Chinese philosophy as a way to give undergraduates concrete, counter-intuitive, and even revolutionary ideas, which teach them how to live a better life.  Elizabeth Malkin, a student in the course last year, says, “The class absolutely changed my perspective of myself, my peers, and of the way I view the world.” Puett puts a fresh spin on the questions that Chinese scholars grappled with centuries ago. He requires his students to closely read original texts (in translation) such as Confucius’s Analects, the Mencius, and the Daodejing and then actively put the teachings into practice in their daily lives. His lectures use Chinese thought in the context of contemporary American life to help 18- and 19-year-olds who are struggling to find their place in the world figure out how to be good human beings; how to create a good society; how to have a flourishing life.

Puett began offering his course to introduce his students not just to a completely different cultural worldview but also to a different set of tools. He told me he is seeing more students who are “feeling pushed onto a very specific path towards very concrete career goals” than he did when he began teaching nearly 20 years ago.  A recent report shows a steep decline over the last decade in the number of Harvard students who are choosing to major in the humanities, a trend roughly seen across the nation’s liberal arts schools. Finance remains the most popular career for Harvard graduates. Puett sees students who orient all their courses and even their extracurricular activities towards practical, predetermined career goals and plans.

Puett tells his students that being calculating and rationally deciding on plans is precisely the wrong way to make any sort of important life decision. The Chinese philosophers they are reading would say that this strategy makes it harder to remain open to other possibilities that don’t fit into that plan. Students who do this “are not paying enough attention to the daily things that actually invigorate and inspire them, out of which could come a really fulfilling, exciting life,” he explains. If what excites a student is not the same as what he has decided is best for him, he becomes trapped on a misguided path, slated to begin an unfulfilling career. Puett aims to open his students’ eyes to a different way to approach everything from relationships to career decisions. He teaches them that:

The smallest actions have the most profound ramifications. Confucius, Mencius, and other Chinese philosophers taught that the most mundane actions can have a ripple effect, and Puett urges his students to become more self-aware, to notice how even the most quotidian acts—holding open the door for someone, smiling at the grocery clerk—change the course of the day by affecting how we feel.

That rush of good feeling that comes after a daily run, the inspiring conversation with a good friend, or the momentary flash of anger that arises when someone cuts in front of us in line—what could they have to do with big life matters? Everything, actually. From a Chinese philosophical point of view, these small daily experiences provide us endless opportunities to understand ourselves. When we notice and understand what makes us tick, react, feel joyful or angry, we develop a better sense of who we are that helps us when approaching new situations. Mencius, a late Confucian thinker (4th century B.C.E.), taught that if you cultivate your better nature in these small ways, you can become an extraordinary person with an incredible influence, altering your own life as well as that of those around you, until finally “you can turn the whole world in the palm of your hand.”

Decisions are made from the heart. Americans tend to believe that humans are rational creatures who make decisions logically, using our brains. But in Chinese, the word for “mind” and “heart” are the same. Puett teaches that the heart and the mind are inextricably linked, and that one does not exist without the other. Whenever we make decisions, from the prosaic to the profound (what to make for dinner; which courses to take next semester; what career path to follow; whom to marry), we will make better ones when we intuit how to integrate heart and mind and let our rational and emotional sides blend into one.  Zhuangzi, a Daoist philosopher, taught that we should train ourselves to become “spontaneous” through daily living, rather than closing ourselves off through what we think of as rational decision-making. In the same way that one deliberately practices the piano in order to eventually play it effortlessly, through our everyday activities we train ourselves to become more open to experiences and phenomena so that eventually the right responses and decisions come spontaneously, without angst, from the heart-mind.

Recent research into neuroscience is confirming that the Chinese philosophers are correct: Brain scans reveal that our unconscious awareness of emotions and phenomena around us are actually what drive the decisions we believe we are making with such logical rationality. According to Marianne LaFrance, a psychology professor at Yale, if we see a happy face for just a fraction of a second (4 milliseconds to be exact), that’s long enough to elicit a mini emotional high. In one study viewers who were flashed a smile—even though it was shown too quickly for them to even realize they had seen it—perceived the things around them more positively.

If the body leads, the mind will follow. Behaving kindly (even when you are not feeling kindly), or smiling at someone (even if you aren’t feeling particularly friendly at the moment) can cause actual differences in how you end up feeling and behaving, even ultimately changing the outcome of a situation.

While all this might sound like hooey-wooey self-help, much of what Puett teaches is previously accepted cultural wisdom that has been lost in the modern age. Aristotle said, “We are what we repeatedly do,” a view shared by thinkers such as Confucius, who taught that the importance of rituals lies in how they inculcate a certain sensibility in a person.  In research published in Psychological Science, social psychologist Amy Cuddy and her colleagues found that when we take a power stance (stand with our legs apart, arms thrust out, taking up space), the pose does not only cause other people to view us as more confident and powerful; it actually causes a hormonal surge that makes us become more confident.

At the end of each class, Puett challenges his students to put the Chinese philosophy they have been learning into tangible practice in their everyday lives. “The Chinese philosophers we read taught that the way to really change lives for the better is from a very mundane level, changing the way people experience and respond to the world, so what I try to do is to hit them at that level. I’m not trying to give my students really big advice about what to do with their lives. I just want to give them a sense of what they can do daily to transform how they live.” Their assignments are small ones: to first observe how they feel when they smile at a stranger, hold open a door for someone, engage in a hobby. He asks them to take note of what happens next: how every action, gesture, or word dramatically affects how others respond to them. Then Puett asks them to pursue more of the activities that they notice arouse positive, excited feelings. In their papers and discussion sections students discuss what it means to live life according to the teachings of these philosophers.

Once they’ve understood themselves better and discovered what they love to do they can then work to become adept at those activities through ample practice and self-cultivation. Self-cultivation is related to another classical Chinese concept: that effort is what counts the most, more than talent or aptitude. We aren’t limited to our innate talents; we all have enormous potential to expand our abilities if we cultivate them. You don’t have to be stuck doing what you happen to be good at; merely pay attention to what you love and proceed from there. Chinese philosophers taught that paying attention to small clues “can literally change everything that we can become as human beings,” says Puett.

To be interconnected, focus on mundane, everyday practices, and understand that great things begin with the very smallest of acts are radical ideas for young people living in a society that pressures them to think big and achieve individual excellence. This might be one reason why, according to the Chronicle for Higher Education, interest in Chinese philosophy is taking off around the nation—not just at Harvard. And it’s a message that’s especially resonating with those yearning for an alternative to the fast track they have been on all their lives.

One of Puett’s former students, Adam Mitchell, was a math and science whiz who went to Harvard intending to major in economics. At Harvard specifically and in society in general, he told me, “we’re expected to think of our future in this rational way: to add up the pros and cons and then make a decision. That leads you down the road of ‘Stick with what you’re good at’”—a road with little risk but little reward. But after his introduction to Chinese philosophy during his sophomore year, he realized this wasn’t the only way to think about the future. Instead, he tried courses he was drawn to but wasn’t naturally adroit at because he had learned how much value lies in working hard to become better at what you love. He became more aware of the way he was affected by those around him, and how they were affected by his own actions in turn. Mitchell threw himself into foreign language learning, feels his relationships have deepened, and is today working towards a master’s degree in regional studies. He told me, “I can happily say that Professor Puett lived up to his promise, that the course did in fact change my life.”
Posted by Mercury at 3:24 PM