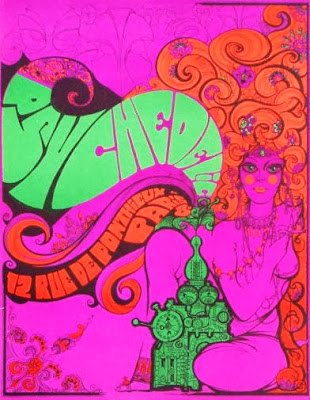 "Psychedelic art: what came out of it?"

Psychedelic art was considered dangerously subversive 50 years ago. A new exhibition in London called Reflections from Damaged Life asks whether anything of aesthetic worth came out of the genre

Psychedelic art is a phrase now quaintly evocative of the late Sixties, conjuring up memories of trippy-hippy album covers lurid with swirls of colour: the bolder, cleaner new visions opened up by CGI and computer games now make it all look as weirdly innocent as a child’s kaleidoscope.

Yet 50 years ago, it was considered dangerously subversive: an attempt to glamorise the experience of hallucinogenic drugs and suggest insight into deeper realities beyond the phenomenal world – an extreme version, one might say, of the larger enterprise of Romanticism, carrying with it all sorts of dangerous delusions and folie de grandeur. But like so many counter-cultural phenomena, it soon slipped into the mainstream and became the norm (the musical Hair and the Beatles’ later albums being the turning point) before things moved on, and along with wampum beads and bell-bottom trousers, it became merely passé.

An excellent new exhibition at Raven Row, Alex Sainsbury’s beautiful gallery in the heart of Huguenot Spitalfields, explores the phenomenon with a commendable lack of moralising hysteria or special pleading and asks whether anything of aesthetic worth came out of the genre.

It cannot evade one basic problem, however: as my own limited and distant but still vivid experience of drugs such as LSD confirms, what made the psychedelic so compellingly potent – what defined it, indeed – wasn’t a succession of static two-dimensional images, but a melting and modulating synaesthesia within an altered perception of time and space.

In other words, it wasn’t seeing a blue rabbit under a table or a man with three heads that made the trip exciting, so much as the way that the blue rabbit became a man with three heads over what seemed like aeons in an environment which smelt of blue cheese and expanded and shrank like something out of Alice in Wonderland – all to the accompaniment of Mahler’s Fifth Symphony.

Nothing on show at Raven Row can suggest this viscousness, although Pierre Huyghe’s installation L’Expedition scintillante, in which smoke rises out of a pool of light to the sound of Satie’s Gymnopédies comes closest. Otherwise the displays are solidly archival, charting a fascinating range of artefacts from Sigmar Polke’s photograph of magic mushrooms and Robert Horvitz’s infinity spirals to documentation of David Medalla’s pioneering “happenings” at the Roundhouse in 1967 and the film of a hilariously camp play satirising the wedding of President Nixon’s daughter performed by a drug-fuelled group called The Cockettes.

What is the sum of it? One imagines that a lot of these artists thought that what they produced under the influence was a lot more significant than it looks to us; and there’s a sort of garrulous excess about much of the work that verges on the dysenteric: a mess, you might say, produced by a hyperactive child.

But there’s an exuberant playfulness too – for example, in Sture Johannesson’s mash-up of Japanese newspapers or Oyvind Fahlström’s picture puzzle The Little General (Pinball machine) – which has its charm and originality. With an element of hot air predominating, psychedelic art may not live up to its pretensions, but the Raven Row exhibition reminds us that its wackiness can at least be diverting and surprising.

Psychedelic art [Wikipedia]
Posted by Mercury at 8:19 AM