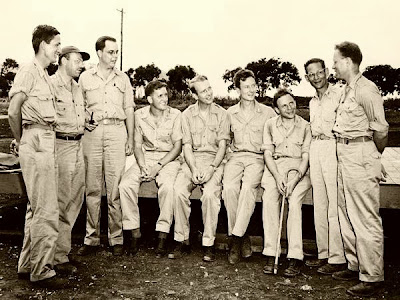 Harold M. Agnew, fourth from left, with other group leaders involved in the atomic bomb project. He later flew on the first atomic strike against Japan and helped perfect the hydrogen bomb.

"Harold M. Agnew, Physicist Present at Birth of the Nuclear Age, Dies at 92"

Harold M. Agnew, the last surviving major figure to have been present at the birth of the nuclear age — a physicist who helped build the world’s first reactor and atomic bombs, flew on the first atomic strike against Japan, filmed the mushroom cloud, helped perfect the hydrogen bomb and led the Los Alamos National Laboratory at the height of the cold war — died on Sunday at his home in Solana Beach, Calif. He was 92.

He had recently been given a diagnosis of chronic lymphocytic leukemia, his family said.

Dr. Agnew was no giant of discovery, but he was ingenious technically and wielded great influence for decades as a presidential adviser and a gregarious hawk, as restless and unpredictable as the tumultuous age he helped define.

“We did pretty good,” he remarked during a 1992 flight between Moscow and Kiev, Ukraine. “We brought a quick end to a devastating war and maintained the peace, and eventually saw democracy prevail. That’s something you can hang your hat on.”

In a statement, Charlie McMillan, the current director of Los Alamos, the birthplace of the bomb in the mountains of New Mexico, called Dr. Agnew “a national treasure,” saying the United States “will be forever in Harold’s debt.”

Harold Melvin Agnew was born in Denver on March 28, 1921, the only child of a stonecutter of Scotch-Irish heritage. A natural athlete, he pitched his softball team to a Denver championship. He majored in chemistry at Denver University, graduated Phi Beta Kappa in 1942 and won a scholarship to Yale.

But the secret wartime effort to build an atomic bomb intruded on his studies. Early in 1942 he was assigned to Enrico Fermi, the Italian Nobel laureate who was helping to lead the project at the University of Chicago. Dr. Agnew did what he called “grunt work,” making scientific measurements and getting a hefty dose of radiation.

Redirected because of the health danger, he helped stack tons of graphite bricks and uranium into a neat pile at a university squash court.

On a blustery Chicago day, Dec. 2, 1942, Dr. Agnew and a few dozen other people gathered to see if the pile could sustain a chain reaction. Recording pens jumped as atoms split in two. The success meant that in theory the human race now had the means to illuminate cities or level them. He was 21.

Dr. Agnew arrived at Los Alamos in March 1943 with his wife, Beverly. The couple shared a bunkhouse with another couple and a man who cooked nothing but Chinese food, even for breakfast. Amid the tall pines and deep canyons, Dr. Agnew helped build and run a particle accelerator whose data helped demonstrate the merits of various bomb designs.

When the world’s first nuclear blast lit up the New Mexico desert before dawn on July 16, 1945, Dr. Agnew was already far away, preparing for the bombing of Hiroshima. He was “aching” for the run to Japan, he recalled, because so many friends had died in the war. He autographed the bomb.

On Aug. 6, he boarded a B-29 bomber that accompanied the Enola Gay, which was carrying the bomb code-named Little Boy. Dr. Agnew and two other scientists measured the size of the shock wave and thus the bomb’s power.

Afterward, he and his colleagues took turns peering out a small window at the mushroom cloud and the ground damage. Dr. Agnew filmed the devastation with a 16-millimeter Bell & Howell movie camera he had taken along. He was the only person to witness the whole undertaking, from reactor to weapon to Hiroshima.

After the war, he studied with Fermi at Chicago and received his Ph.D. in physics in 1949. Returning to Los Alamos, he joined the hunt for a technical edge over the Soviet Union, which had exploded its own atomic bomb in 1949, surprising the West.

In the 1960s, as scientific adviser to the supreme allied commander in Europe, he led the development of protective devices for nuclear arms that kept them under tight presidential control.

Returning to Los Alamos, Dr. Agnew was named head of the weapons division, which developed the warhead for the Minuteman intercontinental ballistic missile, among other arms. In 1970, he became director of the lab, with a staff of about 7,000. Meanwhile, political radicals at the University of California, which ran Los Alamos, labeled him a war criminal and tried him in absentia.

In 1978, Dr. Agnew advised President Jimmy Carter against seeking a comprehensive ban on nuclear testing. He argued that such an East-West stoppage would have ended the development of new arms and, more important, reduced confidence in the potency of the existing arsenal. The White House eventually dropped the ban idea.

Upon retiring from Los Alamos, Dr. Agnew sought to encourage the growth of civilian nuclear power. In March 1979, he became president of General Atomics, a San Diego-based maker and developer of innovative reactors.

From 1982 until 1989, he was a science adviser to the White House under President Ronald Reagan. After the cold war, in 1991, he participated in the first meeting between American bomb makers and their Russian counterparts, seeking ways to reduce nuclear arsenals. In 1992, he urged the United States to buy bomb-grade uranium from scrapped Soviet nuclear arms to bolster the shaky Russian economy and reduce the risk of nuclear war, accident and theft. In August of that year, the White House announced a plan to buy at least 500 metric tons of the material in a deal worth several billion dollars.

The Russian bomb uranium was diluted into fuel for nuclear reactors that make electricity, turning a major danger into a peaceful bonanza.

He also left a towering reputation at Los Alamos. Late in life, Dr. Agnew noted with pride that cars could occasionally be seen there bearing bright orange bumper stickers reading, “Harold, come back.”

This is what he photographed...