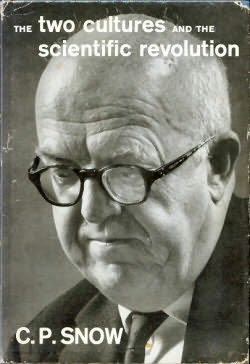 In a famous lecture 50 years ago, CP Snow warned that science and arts were becoming 'two cultures' - but the problem now is far, far worse

Telegraph.co.uk
On May 7 1959, the celebrated novelist C P Snow mounted the podium in the Senate House in Cambridge to deliver that year's Rede Lecture. The title was "The Two Cultures and the Scientific Revolution", and his theme the dangerously wide gap that had opened up between scientists and "literary intellectuals".

He spoke of scientists who could scarcely struggle through a novel by Dickens, but more importantly of humanities professors who were ignorant of the Second Law of Thermodynamics, who sneered at science as an inferior branch of learning that no really cultured person needed to trouble with. "If the scientists have the future in their bones," he claimed, "then the traditional culture responds by wishing the future did not exist."

Snow compared Britain unfavourably with the US and USSR, in terms of numbers of young people who remained in education to the age of 18 and above. The British system, he argued, forced children to specialise at an unusually early age, with snobbery dictating that the children would be pushed towards the "traditional culture" and the professions, rather than science and industry.

He compared Britain with Venice in its decadence: "Like us, [the Venetians] had once been fabulously lucky. They had become rich, as we did, by accident… They knew, just as clearly as we know, that the current of history had begun to flow against them. Many of them gave their minds to working out ways to keep going. It would have meant breaking the pattern into which they had crystallised. They were fond of the pattern, just as we are fond of ours. They never found the will to break it."

These were important themes, but no one could have predicted the extent of the debate that "The Two Cultures" provoked, with articles and arguments springing forth in countries around the world. And then, in 1962, the literary critic F R Leavis chose to pass judgment on Snow's thesis. His counter-lecture was so astonishingly vitriolic, seasoned with an almost toxic dose of the most vulgar abuse, that people were still talking about it in shock and awe when I was an undergraduate at Cambridge 10 years later.

Leavis began by criticising the confident tone of Snow's lecture. He went on to assure the audience that: "Not only is [Snow] not a genius, he is intellectually as undistinguished as it is possible to be… 'The Two Cultures' exhibits an utter lack of intellectual distinction and an embarrassing vulgarity of style." Although Snow had trained as a scientist before becoming a writer, his novels were mediocre – and Leavis was not interested in any literature that was not great. As the academic Stefan Collini put it: "A malevolent deity, setting out to design a single figure in whom the largest number of Leavis's deepest antipathies would find themselves embodied, could not have done better than to create Charles Percy Snow."

Leavis's lecture was reprinted in The Spectator on March 9 1962, and later in the year in book form by Chatto and Windus. Both publishers, seeking to avoid an action for libel, contacted Snow to ask if he required any changes. To his eternal credit, he said that the text should be published as it stood: perhaps he felt that whatever the hurt to his feelings, Leavis's contribution would keep the debate going.

If so, he was right. The controversy has been turned over and pulled apart by commentators from all points on the academic and political compass for nearly half a century. Such was the intensity of debate that it might be supposed that these were age-old themes: but in fact, the idea of separating academic disciplines into groups known as science and humanities was no older than the 19th century. The term "scientist" was only coined in 1833, and it was not until 1882 that another Rede Lecturer, Matthew Arnold, discussed – under the title of "Literature and Science" – whether or not a classical education was still relevant in an age of great scientific and technical advance.

Arnold was responding – with infinitely more courtesy than Leavis – to an earlier lecture by T H Huxley, known as "Darwin's Bulldog" for his rumbustious defence of evolution, who argued that science was as valid an intellectual training as the classics.

It was not a popular opinion. As late as my own childhood in the Sixties, the bright boys were expected to read classics at Oxford, and the less bright steered towards the labs. The Nobel Prize-winning scientist Sir Andrew Huxley recounts that, when he switched from classics to physics, the headmaster of Westminster School accused him of "forsaking virtue for pleasure".

"There is only one way out of all this," Snow had argued. "It is, of course, by rethinking our education." In September 2006, such an attempt was finally made, in response to a perceived crisis in science education. Fewer students were taking science at A-level; the majority of science teachers in schools lacked a relevant degree; university departments were closing or being threatened with closure; and industrialists were complaining that it was becoming impossible to find good scientists.

The new science GCSE was designed to persuade more students to take science at A-level and university by making it more interesting and relevant. The three disciplines of chemistry, physics and biology were conflated as "scientific literacy"; children were encouraged to discuss topical issues such as global warming and MMR vaccines, with particular reference to media coverage.

David Perks, a physics teacher, criticised this approach. Writing for the Institute of Ideas, and later my own think tank, Civitas, he argued that it treated science as a branch of media studies, rather than as a group of discrete bodies of knowledge to be transmitted to the student; it assumed that children can relate only to what they know, and that they should not be challenged by new concepts; it gave too much weight to what children say they enjoy, rather than stretching them to develop their capacity for abstract thought; and it replaced the controlled laboratory experiment – "the backbone of modern scientific enquiry" – with field studies.

He was right on every count: students are now less likely to say that they are interested in science and intend to study it at A-level, and independent schools are bailing out of the new science GCSE in favour of the international GCSE, which retains the three separate sciences. This is contributing towards what Perks describes as "educational apartheid", with state school pupils less likely to read for science degrees at university because they simply won't know enough.

This would have appalled Snow, who came from a lower middle-class background and grew up with few material advantages, attending the local grammar in Leicester and feasting on the books in the public library.

His astonishing progress – a fellowship at Christ's College, Cambridge, by the age of 25 – would be almost impossible to imagine today, for all sorts of reasons. Most of the grammar schools that provided a ladder out of poverty for bright children from poor families have gone, while the academic rigour that characterised all kinds of teaching is also largely a thing of the past.

Indeed, the problems that characterise our education system are no respecters of subject boundaries. A history don at Cambridge told me that he was teaching undergraduates who did not know what the Renaissance and the Reformation were, or which came first. Secondary schools complain that they have to do catch-up when children join them from primary schools; universities have to teach the basics of writing an essay.

This is a situation that would have appalled Leavis and Snow equally. The old debate between arts and sciences, to which they gave the most pungent expression, is now completely out of date. It is no longer a question of whether children should be taught to translate Horace or to solve algebraic equations: it is a question of whether they are to be taught anything at all.

So is there any point in going over this famous debate again? I think the answer is yes, because the Snow/Leavis controversy raised the most profound questions about the nature of education and what we expect it to achieve.

Snow was right to criticise the supercilious dismissal of science as not fit for gentlemen: scientific understanding can be both beautiful and vital for our culture. Leavis was right to call attention to the need for science to operate within the framework of moral values that a humane education can generate: the fact that science permits us to do certain things doesn't mean that we should.

More importantly, the gentlemanly disdain for science that irritated Huxley and Snow was as nothing to the extraordinary suspicion of science that has more recently emerged. Science now faces the charge that it is only one way of understanding the world, not necessarily superior to rival conceptions – and moreover, that it is to blame, among other things, for a potential environmental holocaust in the shape of global warming, because it has enabled more human beings to live on the planet.

In his 1959 lecture, Snow said that if intellectual Luddites wanted to turn their backs on the benefits of industrialisation, go hungry and see most of their children die in infancy, they were free to make that choice. "I respect you for the strength of your aesthetic revulsion," he said. "But I don't respect you in the slightest if, even passively, you try to impose the same choice on others who are not free to choose."

At the heart of a liberal education is the notion that human beings are capable of moving from barbarism to civilisation by using their intellectual and moral capacities – and that is an idea which ought to unite scientists and literary intellectuals alike.

[Dedicated to a nameless British physics website who are not advocates of academic knowledge for the populace.]

A new book on the subject: