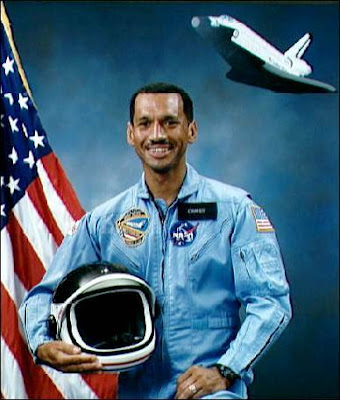 Finally, the United States has a NASA leader. He will have a lot of tough decisions to make with the economy in shambles and an aged low altitude space ship fleet.

The Associated Press
The nation's turbulent space program will be run by one of its own, a calming well-liked former space shuttle commander.

President Barack Obama on Saturday chose retired astronaut Gen. Charles Bolden to lead NASA. He also named former NASA associate administrator Lori Garver as the agency's No. 2. If confirmed, Bolden, who has flown in space four times and was an assistant deputy administrator at one point, would be the agency's first black administrator.

Bolden would also be only the second astronaut to run NASA in its 50-year history. Adm. Richard Truly was the first. In 2002, then-President George W. Bush unsuccessfully tried to appoint Bolden as the space agency's deputy administrator. The Pentagon said it needed to keep Bolden, who was a Marine general at the time and a pilot who flew more than 100 sorties in Vietnam.

"Charlie knows NASA and the people know Charlie; there's a level of comfort," especially given the uncertainty the space agency faces, said retired astronaut Steve Hawley, who flew twice in space with Bolden.

Bolden likely will bring "more balance" to NASA, increasing spending on aeronautics and environment missions, working more with other nations in space, and emphasizing education, which the president often talks about when it comes to space, said former Johnson Space Center Director George Abbey, a longtime friend.

"He's a real leader," Abbey said Saturday. "NASA has been looking for a leader like this that they could have confidence in."

Bolden's appointment came during the tail end of the space shuttle Atlantis' mission to repair the Hubble Space Telescope one final time. He was the pilot on the flight that sent Hubble into orbit in 1990.

Bolden, 62, would inherit a NASA that doesn't look much like the still-somewhat-fresh-from-the-moon agency he joined as an astronaut in 1980. NASA now "is faced with a lot of uncertainty," Abbey said.

Bush set in motion a plan to retire the space shuttle fleet at the end of next year and return astronauts to the moon and then head out to Mars in a series of rockets and capsules that borrows heavily from the 1960s Apollo program. The shuttle's replacement won't be ready until at least 2015, so for five years the only way Americans will be able to get in space is by hitching a ride on a Russian space capsule. And some of NASA's biggest science programs are over budget.

Earlier this month, the White House ordered a complete outside examination of the manned space program. The Obama administration hasn't been explicit about its space policy, with White House science adviser John Holdren saying the policy would come after a NASA chief was named.

"These talented individuals will help put NASA on course to boldly push the boundaries of science, aeronautics and exploration in the 21st century and ensure the long-term vibrancy of America's space program," Obama said of Bolden and Garver in a statement.

At NASA's Johnson Space Center in Houston, where Bolden spent about a decade, his impending appointment was quietly cheered on all week long.

The diminutive salt-and-pepper haired Bolden, who lives only a few miles from the space center, on Saturday morning said he couldn't talk until after Senate confirmation. He was busy answering congratulatory e-mails from home. He has his own consulting firm in Houston and sits on corporate boards.

Those who have flown or worked with Bolden can't praise him enough.

Retired astronaut Franklin Chang-Diaz interviewed to become an astronaut the same week as Bolden, was picked at the same time, and they flew together on their first flights.

Soon after that much-delayed launch of the space shuttle Columbia in January 1986, Chang-Diaz looked at his friend Bolden and saw that the shuttle pilot had a "big, big smile... we were kind of like kids in a candy store."

Hawley and then-U.S. Rep. Bill Nelson were also aboard that 1986 flight. Nelson, now the chairman of the Senate subcommittee on space that will oversee Bolden's nomination and one of the people pushing Bolden's nomination to the White House, commented: "I trusted Charlie with my life - and would do so again."

Kathryn Sullivan was the payload commander on the 1992 flight of Atlantis, which was Bolden's first of two shuttle commands. She said Bolden has all the aspects of leadership that a good chief requires. That includes experience, wisdom and the ability to listen to all sides. She called him "one of the finest people I've ever known."

"Charlie's a great leader," Chang-Diaz agreed. "He takes care of his team."


NASA administrator...do we have a winner?
Posted by Mercury at 2:07 PM