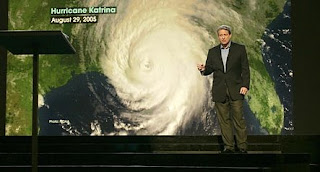 Do you believe in Al Gore's environmental perspective?

I am not going to go into the Gore/global warming issue. I have my perspective and stated it elsewhere at the this blog and frankly, I become bored with all of the hype and unscientific evidence and will only say that Al Gore has made a mockery of science and exploited the global warming issue.

"From a Rapt Audience, a Call to Cool the Hype"

The New York Times
Hollywood has a thing for Al Gore and his three-alarm film on global warming, "An Inconvenient Truth," which won an Academy Award for best documentary. So do many environmentalists, who praise him as a visionary, and many scientists, who laud him for raising public awareness of climate change.

But part of his scientific audience is uneasy. In talks, articles and blog entries that have appeared since his film and accompanying book came out last year, these scientists argue that some of Mr. Gore's central points are exaggerated and erroneous. They are alarmed, some say, at what they call his alarmism.

"I don't want to pick on Al Gore," Don J. Easterbrook, an emeritus professor of geology at Western Washington University, told hundreds of experts at the annual meeting of the Geological Society of America. "But there are a lot of inaccuracies in the statements we are seeing, and we have to temper that with real data."

Mr. Gore, in an e-mail exchange about the critics, said his work made "the most important and salient points" about climate change, if not "some nuances and distinctions" scientists might want. "The degree of scientific consensus on global warming has never been stronger," he said, adding, "I am trying to communicate the essence of it in the lay language that I understand."

Although Mr. Gore is not a scientist, he does rely heavily on the authority of science in "An Inconvenient Truth," which is why scientists are sensitive to its details and claims.

Criticisms of Mr. Gore have come not only from conservative groups and prominent skeptics of catastrophic warming, but also from rank-and-file scientists like Dr. Easterbook, who told his peers that he had no political ax to grind. A few see natural variation as more central to global warming than heat-trapping gases. Many appear to occupy a middle ground in the climate debate, seeing human activity as a serious threat but challenging what they call the extremism of both skeptics and zealots.

Kevin Vranes, a climatologist at the Center for Science and Technology Policy Research at the University of Colorado, said he sensed a growing backlash against exaggeration. While praising Mr. Gore for "getting the message out," Dr. Vranes questioned whether his presentations were "overselling our certainty about knowing the future."

Typically, the concern is not over the existence of climate change, or the idea that the human production of heat-trapping gases is partly or largely to blame for the globe's recent warming. The question is whether Mr. Gore has gone beyond the scientific evidence.

"He's a very polarizing figure in the science community," said Roger A. Pielke Jr., an environmental scientist who is a colleague of Dr. Vranes at the University of Colorado center. "Very quickly, these discussions turn from the issue to the person, and become a referendum on Mr. Gore."

"An Inconvenient Truth," directed by Davis Guggenheim, was released last May and took in more than $46 million, making it one of the top-grossing documentaries ever. The companion book by Mr. Gore quickly became a best seller, reaching No. 1 on the New York Times list.

Mr. Gore depicted a future in which temperatures soar, ice sheets melt, seas rise, hurricanes batter the coasts and people die en masse. "Unless we act boldly," he wrote, "our world will undergo a string of terrible catastrophes."

He clearly has supporters among leading scientists, who commend his popularizations and call his science basically sound. In December, he spoke in San Francisco to the American Geophysical Union and got a reception fit for a rock star from thousands of attendees.

"He has credibility in this community," said Tim Killeen, the group's president and director of the National Center for Atmospheric Research, a top group studying climate change. "There's no question he's read a lot and is able to respond in a very effective way."

Some backers concede minor inaccuracies but see them as reasonable for a politician. James E. Hansen, an environmental scientist, director of NASA's Goddard Institute for Space Studies and a top adviser to Mr. Gore, said, "Al does an exceptionally good job of seeing the forest for the trees," adding that Mr. Gore often did so "better than scientists."

Still, Dr. Hansen said, the former vice president's work may hold "imperfections" and "technical flaws." He pointed to hurricanes, an icon for Mr. Gore, who highlights the devastation of Hurricane Katrina and cites research suggesting that global warming will cause both storm frequency and deadliness to rise. Yet this past Atlantic season produced fewer hurricanes than forecasters predicted (five versus nine), and none that hit the United States.

In his e-mail message, Mr. Gore defended his work as fundamentally accurate. "Of course," he said, "there will always be questions around the edges of the science, and we have to rely upon the scientific community to continue to ask and to challenge and to answer those questions."

He said "not every single adviser" agreed with him on every point, "but we do agree on the fundamentals" — that warming is real and caused by humans.

Mr. Gore added that he perceived no general backlash among scientists against his work. "I have received a great deal of positive feedback," he said. "I have also received comments about items that should be changed, and I have updated the book and slideshow to reflect these comments." He gave no specifics on which points he had revised.

He said that after 30 years of trying to communicate the dangers of global warming, "I think that I’m finally getting a little better at it."

While reviewers tended to praise the book and movie, vocal skeptics of global warming protested almost immediately. Richard S. Lindzen, a climatologist at the Massachusetts Institute of Technology and a member of the National Academy of Sciences, who has long expressed skepticism about dire climate predictions, accused Mr. Gore in The Wall Street Journal of "shrill alarmism."

Some of Mr. Gore's centrist detractors point to a report last month by the Intergovernmental Panel on Climate Change, a United Nations body that studies global warming. The panel went further than ever before in saying that humans were the main cause of the globe's warming since 1950, part of Mr. Gore's message that few scientists dispute. But it also portrayed climate change as a slow-motion process.

It estimated that the world's seas in this century would rise a maximum of 23 inches — down from earlier estimates. Mr. Gore, citing no particular time frame, envisions rises of up to 20 feet and depicts parts of New York, Florida and other heavily populated areas as sinking beneath the waves, implying, at least visually, that inundation is imminent.

Bjorn Lomborg, a statistician and political scientist in Denmark long skeptical of catastrophic global warming, said in a syndicated article that the panel, unlike Mr. Gore, had refrained from scaremongering. "Climate change is a real and serious problem" that calls for careful analysis and sound policy, Dr. Lomborg said. "The cacophony of screaming," he added, "does not help."

So too, a report last June by the National Academies seemed to contradict Mr. Gore's portrayal of recent temperatures as the highest in the past millennium. Instead, the report said, current highs appeared unrivaled since only 1600, the tail end of a temperature rise known as the medieval warm period.

Roy Spencer, a climatologist at the University of Alabama, Huntsville, said on a blog that Mr. Gore’s film did "indeed do a pretty good job of presenting the most dire scenarios." But the June report, he added, shows "that all we really know is that we are warmer now than we were during the last 400 years."

Other critics have zeroed in on Mr. Gore's claim that the energy industry ran a "disinformation campaign" that produced false discord on global warming. The truth, he said, was that virtually all unbiased scientists agreed that humans were the main culprits. But Benny J. Peiser, a social anthropologist in Britain who runs the Cambridge-Conference Network, or CCNet, an Internet newsletter on climate change and natural disasters, challenged the claim of scientific consensus with examples of pointed disagreement.

"Hardly a week goes by," Dr. Peiser said, "without a new research paper that questions part or even some basics of climate change theory," including some reports that offer alternatives to human activity for global warming.

Geologists have documented age upon age of climate swings, and some charge Mr. Gore with ignoring such rhythms.

"Nowhere does Mr. Gore tell his audience that all of the phenomena that he describes fall within the natural range of environmental change on our planet," Robert M. Carter, a marine geologist at James Cook University in Australia, said in a September blog. "Nor does he present any evidence that climate during the 20th century departed discernibly from its historical pattern of constant change."

In October, Dr. Easterbrook made similar points at the geological society meeting in Philadelphia. He hotly disputed Mr. Gore's claim that "our civilization has never experienced any environmental shift remotely similar to this" threatened change.

Nonsense, Dr. Easterbrook told the crowded session. He flashed a slide that showed temperature trends for the past 15,000 years. It highlighted 10 large swings, including the medieval warm period. These shifts, he said, were up to "20 times greater than the warming in the past century."

Getting personal, he mocked Mr. Gore's assertion that scientists agreed on global warming except those industry had corrupted. "I've never been paid a nickel by an oil company," Dr. Easterbrook told the group. "And I’m not a Republican."

Biologists, too, have gotten into the act. In January, Paul Reiter, an active skeptic of global warming's effects and director of the insects and infectious diseases unit of the Pasteur Institute in Paris, faulted Mr. Gore for his portrayal of global warming as spreading malaria.

"For 12 years, my colleagues and I have protested against the unsubstantiated claims," Dr. Reiter wrote in The International Herald Tribune. "We have done the studies and challenged the alarmists, but they continue to ignore the facts."

Michael Oppenheimer, a professor of geosciences and international affairs at Princeton who advised Mr. Gore on the book and movie, said that reasonable scientists disagreed on the malaria issue and other points that the critics had raised. In general, he said, Mr. Gore had distinguished himself for integrity.

"On balance, he did quite well — a credible and entertaining job on a difficult subject," Dr. Oppenheimer said. "For that, he deserves a lot of credit. If you rake him over the coals, you're going to find people who disagree. But in terms of the big picture, he got it right."
Posted by Mercury at 6:02 AM