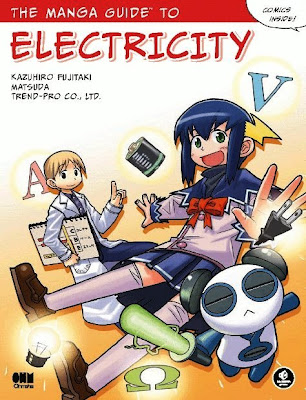 The Manga Guide to Electricity 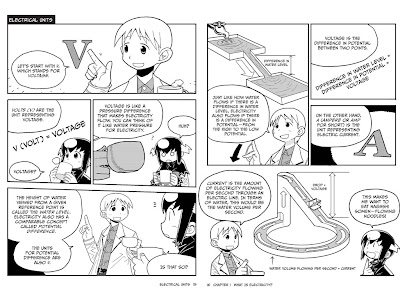 [Click to enlarge to read.]
This isn't the first time that the medium of comic books has been used to teach something--especially science. Kazuhiro Fujitaki's big-eyed Manga character Rereko attempts to introduce the physics of electricity.

"The Manga Guide to Electricity Shows You, And Big-Eyed Manga Girls, How It Works"

Wired
The latest in No Starch's "Manga Guide to" series, the The Manga Guide to Electricity introduces electricity to neophytes in a fun yet informative manner. You’ve heard the 'water' method for teaching electricity — the hose is a wire, water is current, a bucket is a capacitor, and so on. It's necessary because electricity really isn't a simple subject, though it's something everyone should learn about because it so profoundly affects our everyday lives. Well, this book doesn't bother with analogies, instead it softens the impact of the mind-numbing jargon with an amusing comic-booky subplot.

Rereko is just your average high school girl from Electopia, the land of electricity. But she's failed her final electricity exam! Now she has to go to summer school on Earth. And this time, she has to pass.

Smartly, the manga starts with electricity found in the home. How does the electricity that comes out of your outlet compare with the juice that powers your flashlight? What about circuit breakers and fuses? Soon, however, the book delves into technical stuff, explaining about Ohm’s law, diodes, and magnetic fields. Do you know how fuel cells work? How about capacitors? This book will teach you. This is not a fluffy book, regardless of the romance angle.

This is a manga book and seemingly no manga is complete without at least a token romantic plot. Rereko, the impressionable young student, has become the pupil and maid (!) of Hikaru, a nerdy but mojo-laden young scholar who has been hired to tutor her on electricity. It goes without saying that Rereko gets sweet on her tutor and he seems somewhat fond of her as well. When Rereko's robot aide Yonosuke informs her it’s time for her to return to Electopia, the robot mysteriously suffers a catastrophic accident, forcing Rereko to stay on earth a while longer. Aw shucks!

The story is silly and unnecessary, but nevertheless, adds an wonderful charm that takes the edge off of a rather technically demanding subject. How many textbooks have managed to bore students to tears with their wooden, excessively technical ramblings? The Manga Guide to Electricity makes accessible a very intimidating subject, letting the reader have fun while still delivering the goods.
Posted by Mercury at 5:27 AM